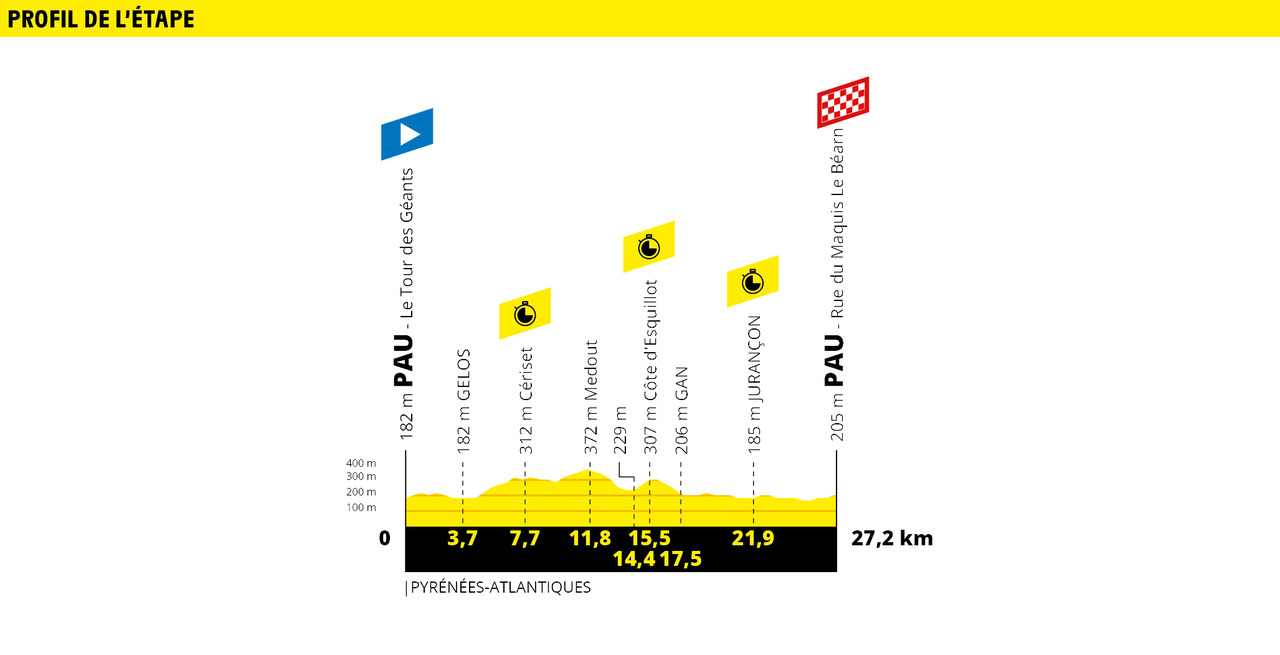 A time trial to shake up the overall classification before a series of mountain stages. If watching a TT on TV isn’t your thing then don’t miss La Course this morning. 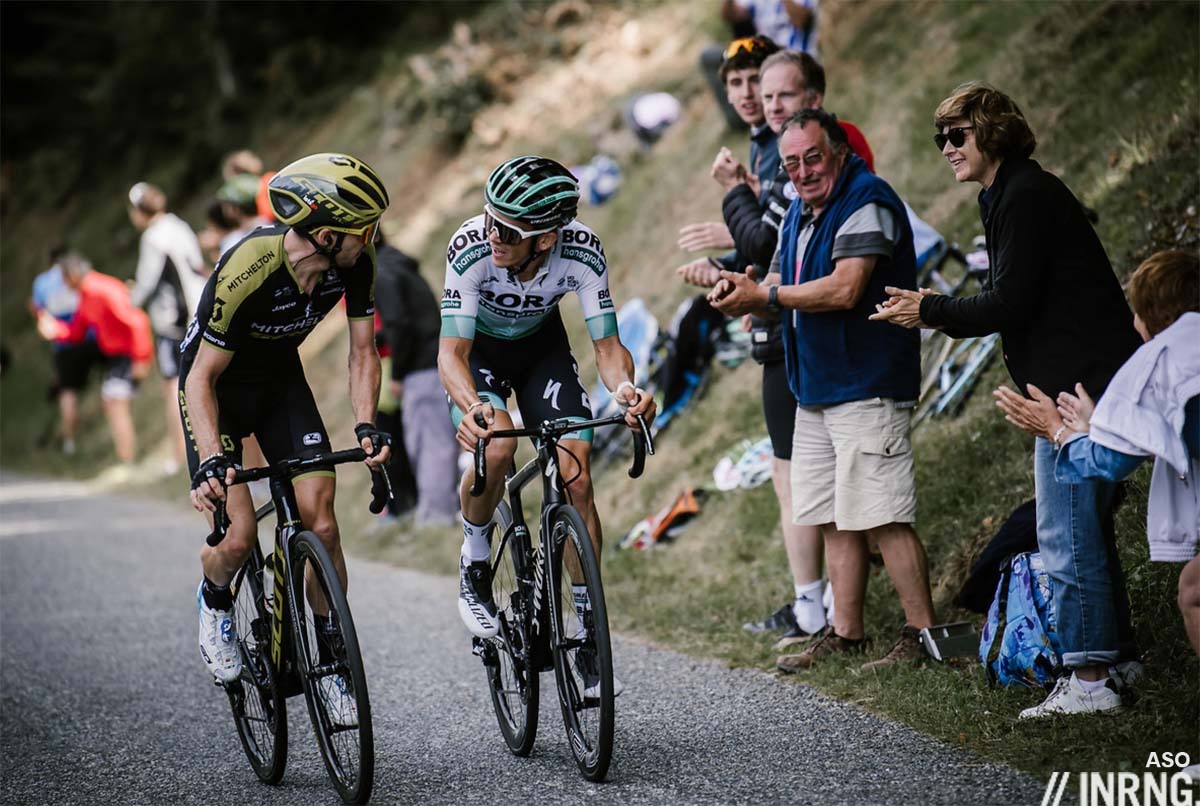 Stage 12 Review: the combativity prize often feels like a consolatory offering but yesterday’s stage had a wild start with wave after wave of attacks until a giant move finally went clear on the plains. Once on the mountains the Peyresourde thinned the move a touch but it was on Hourquette d’Ancizan that things were lively. Simon Clarke led into the climb chased by Matteo Trentin and later Simon Yates appeared to be working to catch team mate Trentin but was more covering moves and thinning the chasers down and sure enough a small group caught and passed Trentin. Yates’ hallmark move is going clear over the top of the final climb but this time couldn’t or wouldn’t go clear and had Gregor Mühlberger for company over the top of the climb with Pello Bilbao joining on the descent. The trio had time to play with but kept working together all the way to the finish and Simon Yates led into the final corner and played it cool to keep Bilbao away and close the door on Mühlberger as his team owner Gerry Ryan looked on with delight.

There was also an imbroglio over Rohan Dennis’s abandon, he quit mid-race and his team put out a tweet saying they’d “launch an immediate investigation” into what happened which translates into they didn’t know why either although it seems an argument with the team staff could be to blame. It’s not a big deal, just a PR blunder.

The Route: a 27km course in two parts with the outward section to the second timecheck at 15.5km being a rolling route with several ups and downs including a climb right at the start in town before heading into the Jurançon via a small road where there’s a climb to the first time check with some 7-8% sections and the second time check is also atop a hill with a kilometre at over 7%. The return to Pau is on the Route Nationale, a larger, flatter road but with a sting in the tail, a steep climb with 450m to go, just 120m long but 10%. 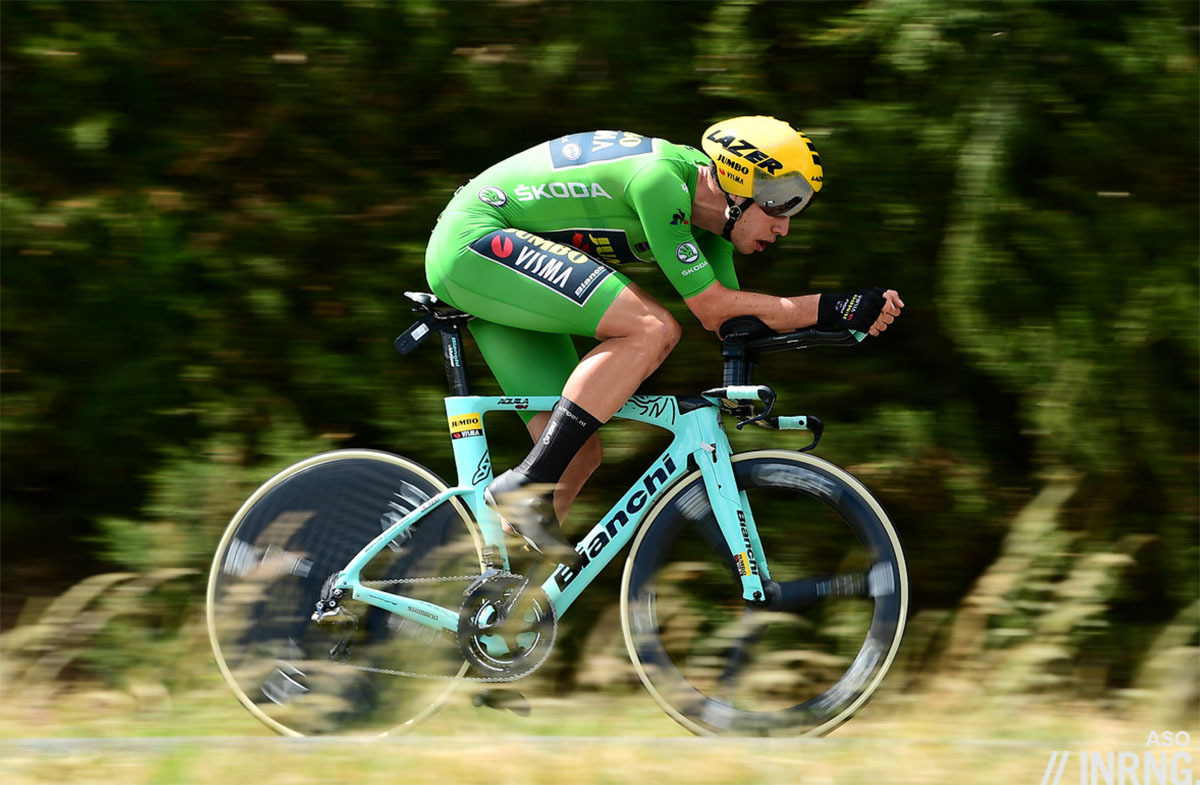 The Contenders: Wout van Aert won the time trial in the Critérium du Dauphiné and by some margin. Jumbo-Visma have had a great Tour so far and he’s a contender to win again today but how tired is he, he’s never done a stage race this long and race over mountains yesterday that aren’t his thing. Tony Martin used to be a certain pick but a reminder that he hasn’t won a World Tour level time trial since 2015.

Geraint Thomas is one of several contenders from Team Ineos. We’ve only had glimpses at his form so far, be it his jump atop the Planche des Belles Filles or chasing back to the peloton on the stage to Saint-Etienne but each time he’s looked convincing to the point where he should take time on GC rivals today and also has a shot at the stage win. It’ll depend on tactics and ambition but Michał Kwiatkowski could also have a shot today.

Of the other GC contenders perhaps only Richie Porte has the pedigree to win the stage today, this seems unlikely as his form’s still in doubt but this is his day to move up the GC.

Deceuninck-Quickstep have three goes to today in Yves Lampaert, Kasper Asgreen and Julian Alaphilippe. Lampaert is strong but his challenge is the hilly, technical first half while Asgreen’s was second to Lampaert in the Tour de Suisse TT in Goms but has been toiling all week. Alaphilippe’s won time trials before and be roared on by the crowds.

Now for a few outside specialists. Movistar’s Nelson Oliveira has won some time trials before but never at this level. Mitchelton-Scott’s Luke Durbridge could try but will Durbo want to deploy the turbo or his he 100% in for Adam Yates. Katusha-Alpecin’s Alex Dowsett is an infrequent winner but seems in good form and Nils Politt almost won in Paris-Nice but both could find the first part of the course ruinous. Groupama-FDJ’s Stefan Küng is also a big rider who could find the course too hilly. Team Sunweb have two picks in Giro TT stage winner Chag Haga and Søren Kragh Andersen ahead of Wilco Kelderman.

Yellow story: today’s the 100th anniversary to the day of the maillot jaune when it was awarded to Eugène Christophe mid-race in Grenoble. 50 years ago the anniversary was celebrated by… the arrival of a sponsor on the jersey in Virlux, a brand of butter. The competition had been sponsored by several companies from oil giant Shell to a brewery the jersey itself didn’t have a visible sponsor until Virlux appeared with a small red lozenge logo.

TV: the first rider, lanterne rouge Yoann Offredo, is off at 2.00pm and Julian Alaphilippe hits the road at 5.19pm CEST / Euro time and is expected to finish around 5.55pm. You can tune into see the main GC contenders but remember La Course is on with the TT course with five laps. The race starts at 9.20am and TV coverage from 10.00am CEST and the finish is due at 12.20pm CEST.