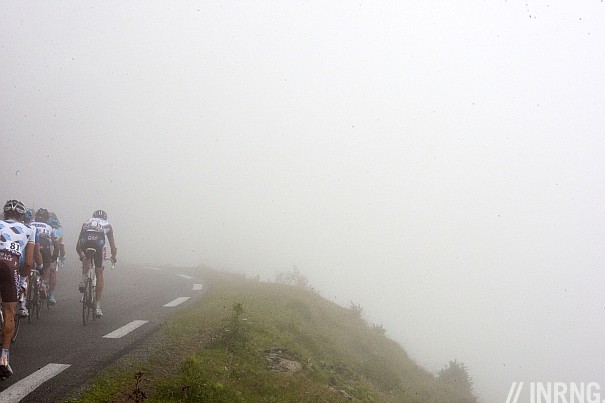 As the fifth part of a series to explore the famous roads of cycling, here is the Col du Soulor in the French Pyrenees. The idea is to discover the road and its place in the world, whether as part of cycling’s history or to look at the route on a day without racing and it is open to all.

The Route
The Col du Soulor is a mountain pass in the Pyrenees that’s 1,474 metres above sea level. There are three main routes to the top. One is to climb from Argelès Gazost, heading west and up the valley. The second is cheating because you come down from the Col de l’Aubisque and head east to the Col du Soulor.

But this piece is about the best route from the south, taking D126 south along the Ouzom valley from Asson. The climb is 13km at 7.1% reaching a height of 1474m above sea level.

It starts distinctly. A sharp bend out of the village of Ferrières and the road climbs narrows and climbs immediately through woodland which offers shade on a hot day, helpful given the gradient much of the way. The slope is regular with some steep sections but this is a steady climb without any traps or tricks.

The Feel
Why pick the Soulor? Because it’s big enough for the Tour de France but totally unspoilt. It’s good even before you climb, the approach from Arthez d’Asson heads up the Ouzom valley which gradually gets more and more narrow. Unlike the Alps which begin with foothills, it is possible to arrive at the Pyrenees without much climbing and this particular road takes you from the plains of Pau right to the start of the col without much elevation, just enough to follow the course of the river back up the valley.

The area was a centre of mining although back in the days when men worked hammers and shovels. The town of Ferrières takes its name from fer or iron but much of this has gone. Traces of this remain, for example the Ouzom river has been channelled and if many of the old mills have gone, the canals remain.

The climb starts abruptly and like many of the climbs in the Pyrenees this seems to follow the terrain and ancient routes, as opposed to the Alpine engineering where Napoleon ordered a road to be built with regular gradients to facilitate the transport of artillery. Not all the Alps are like this but the Pyrenees are wilder. The Soulor in particular stands out as a long climb with a history in the Tour de France but unlike the Tourmalet or Aspin, there’s no ski resort along the way. In fact there’s next to nothing, not even a shop if you exclude one cheese-selling farm on the way up. The more you climb the more the trees give way to grassy pastures and finally open space so the higher you go the smaller you feel. This is the unspoilt Pyrenees in their beauty here, no idle ski lifts or neon-lit shop fronts.

The road does not have much traffic, expect a yellow Poste van or maybe a battered car with sheepdog riding shotgun. Higher up the cyclist is more likely to encounter animals instead of humans as cows and sheep roam on the pastures and frequently wander on the road – even when the Tour passes –  held back by what the French call “Canadian barriers“. If you’re really, really (un)lucky you might spot a wild brown bear. There’s little reason to use this road unless someone wants to get to the top.

In fact even when the Tour comes this is a quieter road as access isn’t easy and it’s never been a final summit finish, it’s often the first climb of the day, an entry into the Pyrenees. But there is a permanent reminder of the Tour de France because like many of the climbs in the Pyrenees there are markers every kilometre. Now every road in France has a marker but these are not the small white and yellow bornes. Instead they are large signs on posts that indicate the distance to the summit and the average gradient for the next kilometre. They’re also a sign that cycling is an important contribution to tourism in the summer.

Col d’Aubisque
The Col d’Aubisque is the big sister but the pair are equally shy. Labelled in Mountain High by Daniel Friebe as the Tour de France’s “forgotten mountain”, the Aubisque sits in the shadow of the nearby Col du Tourmalet. Yet the Soulor is another route up to the same place, perhaps even less famous than the Aubisque. Sometimes the Soulor is labelled as “the footstep of the Aubisque” because it’s a genuine climb rather than a back road or access route.

Tour de France
First used in 1912 the race has only used this climb 20 times – see the photo from 2010 above – which surprises given its central location:

It’s not proved strategic but in 1994 British cyclist Chris Boardman crashed on the descent and left the race.

Say It
Sue Law and r-r-r-r-oll that last r to sound like a local.

Access
Pau makes a good base but major transport connections are to the city of Toulouse. Pau’s a student town, it’s got a younger feel than the rest of the Pyrenees, where sometimes each kilometre ridden south of Pau seems to take you back a year in time, by the time you reach the cols you glimpse old ways of life. It can be a ride but several cols are in within reach, including the Tourmalet so the cyclist can easily spend a week in the area.

Pau has some traditional virtues, you’ll find many family-run hotels which can vary in their charm but you are at least assured an escape from the tyranny of the chain hotels which lurk on the outskirts. It’s got a history as the seat of kings in the past and more recently it’s got one of Europe’s last urban motor racing circuits and visitors can spot the painted kerbstones and crash barriers, some even try a lap for fun.

So good they named it twice

Nearby Lourdes has a glut of hotel rooms but avoid it unless you’re combining the riding with a pilgrimage to the Catholic shrine as it’s often a strange place where the volume of kitsch religious memorabilia trying to cash in on the fame probably tests the faith of the devout and it certainly spoils the calm.

Summary
A climb that’s a real test and part of the Tour de France yet this is a road that offers escape. Forget the legends of the Tour and the giants of the road – we’ll return to the Col du Tourmalet in time – this is an isolated road where the approach is as scenic as the climb itself. This is a real road to ride as opposed to a place to race.

Next week an Italian climb that’s the opposite of quiet and discreet, instead it is the highpoint of the Giro and the summit of Italian cycling: the Passo dello Stelvio.