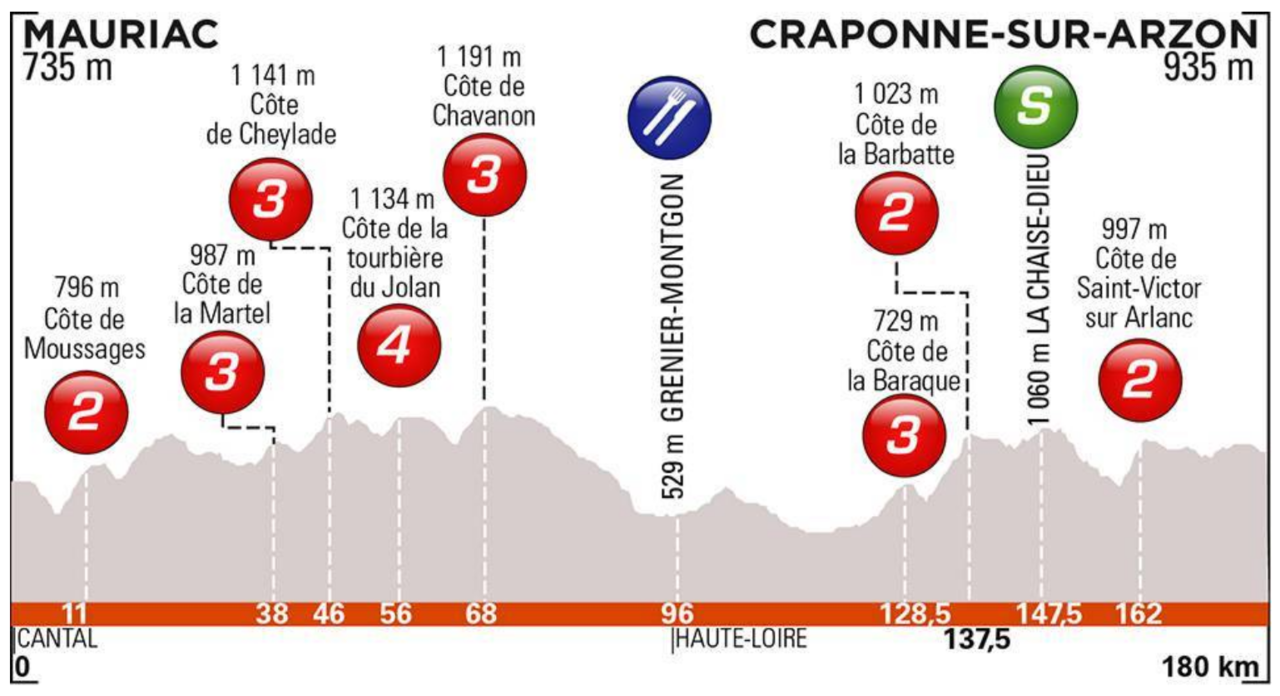 A rugged day across the Auvergne featuring narrow, rural roads and a passage through Brioude where Romain Bardet grew up and a Tour de France host town later this year. The final climb with 20km to go is steep and irregular and should ruin the day for several sprinters again. 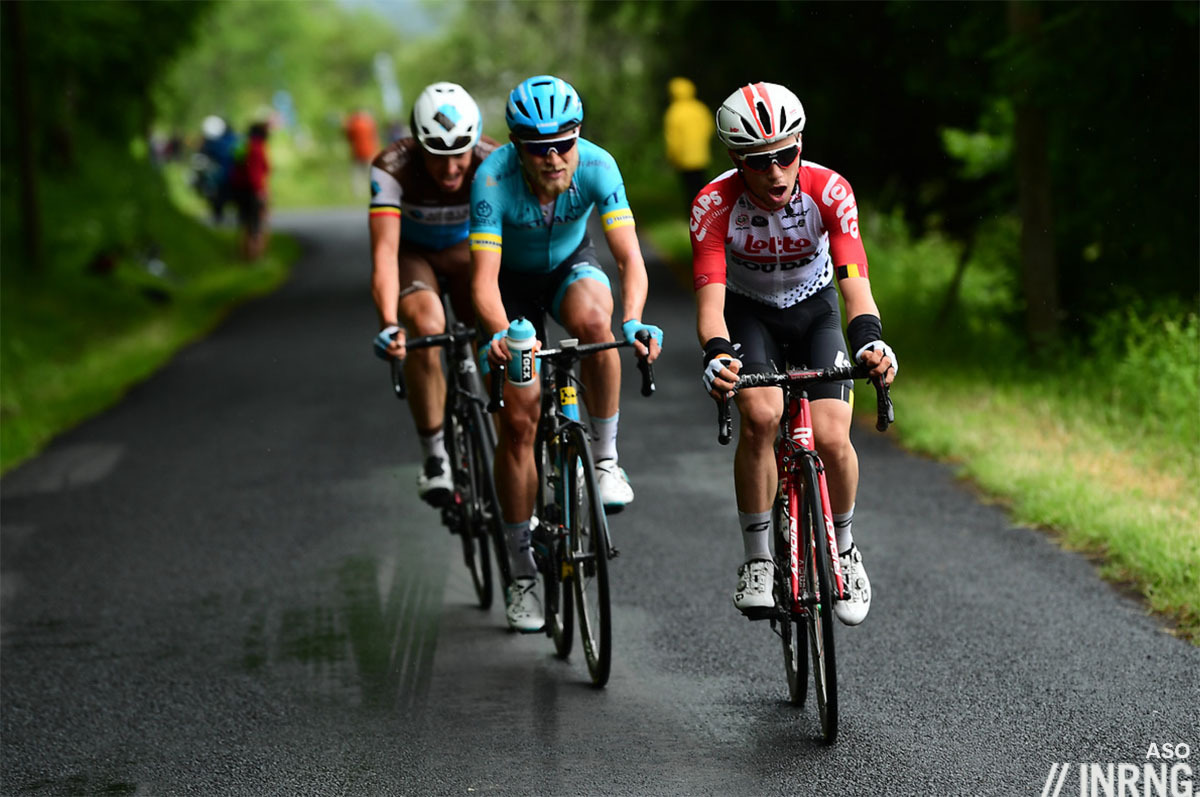 Stage 1 Review: a fast stage, a nervous stage. The early breakaway survived until the final 500 metres with Oliver Naesen – a Flandrien who is active in the summer too – and Magnus Cort Nielsen being joined by Bjorg Lambrecht who jumped out of the peloton in the finale. We got a sprint but from a reduced group with most sprinters having been dropped, some went early and some late thanks to a big acceleration from Deceuninck-Quickstep on the final climb. Mitchelton-Scott worked hard to bring the escape back for Daryl Impey but Edvald Boasson Hagen came round the final corner in a perfect place to win ahead of Philippe Gilbert and Wout van Aert. Once upon a time Boasson Hagen was the future but these days his Dimension Data team must be delighted that he’s able to revive the past, winning stages of the Dauphiné like it’s 2016 when he took a stage in Belley. It’s a helpful win for Dimension Data but remember they started yesterday equal to Trek-Segafredo on four wins this season, ahead of Bahrain-Merida and Katusha-Alpecin each on just three. 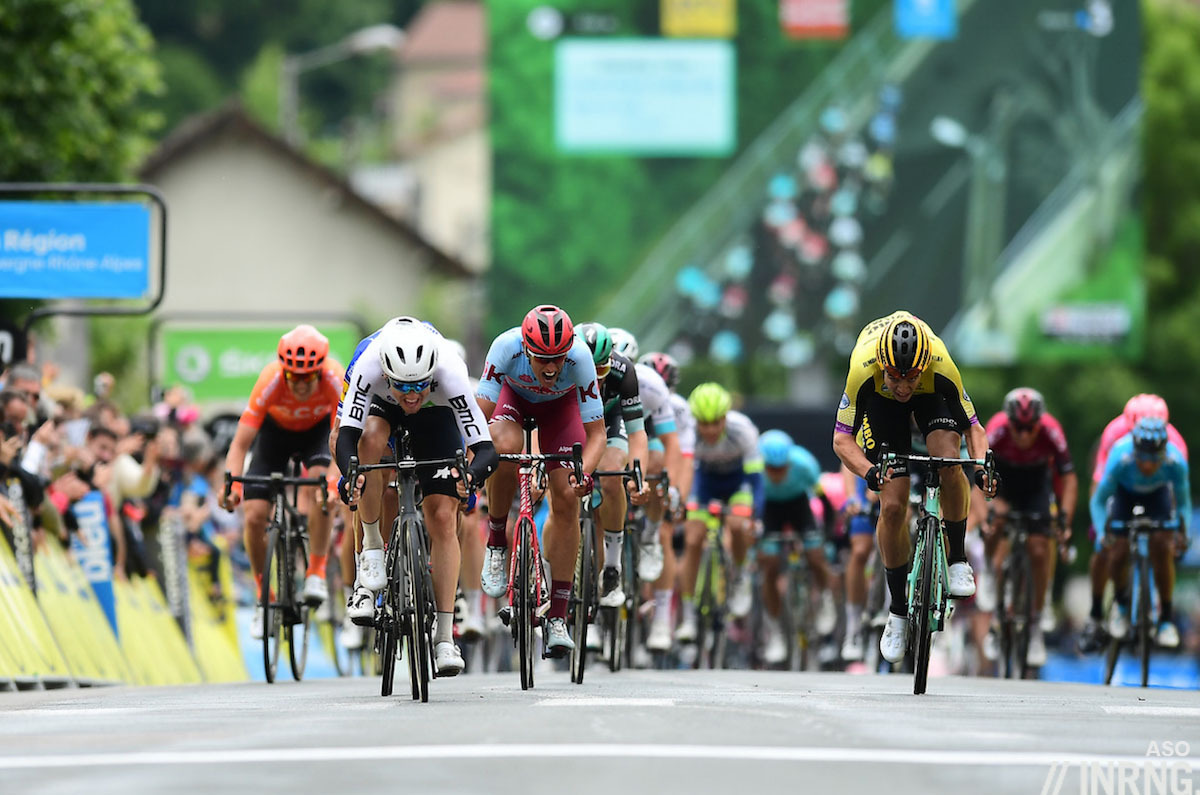 The Route: 180km east on rugged rural roads to Craponne-sur-Arzon, France’s home of stetson hats and banjos as it’s host to Europe’s largest country music festival. To get there there are plenty of rural roads and more côtes than a café wine menu. They pass through Brioude, where Romain Bardet grew up, and host to a stage of the Tour de France next month.

The last climb to Saint-Victor-sur Arlanc is 3km at 9.5% and all on a narrow tertiary road and followed by a long, exposed road, the kind where lone dropped riders will struggle to get back to the bunch but also a lone attacker will find themselves stranded.

The Finish: a run through town and the road rises up to the line for the final 250 metres.

The Contenders: it’s a perfect finish for Edvald Boasson Hagen, a hard day’s ride with a climb to shake off rival sprinters before an uphill sprint. Only it’s all too obvious, his Dimension Data team will try to defend his yellow jersey. Still other teams should join in because they have house sprinters like Sonny Colbrelli (Bahrain-Merida) and Daryl Impey (Mitchelton-Scott) who can thrive in a finish like this. But this makes for few teams able to contain the race so the early breakaway is in with a chance. Also aa late move with the likes of Philippe Gilbert and Julian Alaphilippe (Deceuninck-Quickstep), Wout van Aert (Jumbo-Visma) and others like Alexey Lutsenko (Astana) or Toms Skujiņš (Trek-Segafredo) among others know it’s today or never for the Dauphiné as tomorrow’s much flatter, Wednesday’s a TT and Thursday’s probably for the sprinters too. Michał Kwiatkowski (Ineos) can sprint well from a small group, as can others.

Weather: cloudy, rain showers and 11°C as if it’s March

TV: the finish is forecast for 4.30pm CEST / Euro time and the climb to Saint Victor begins about half an hour before this.