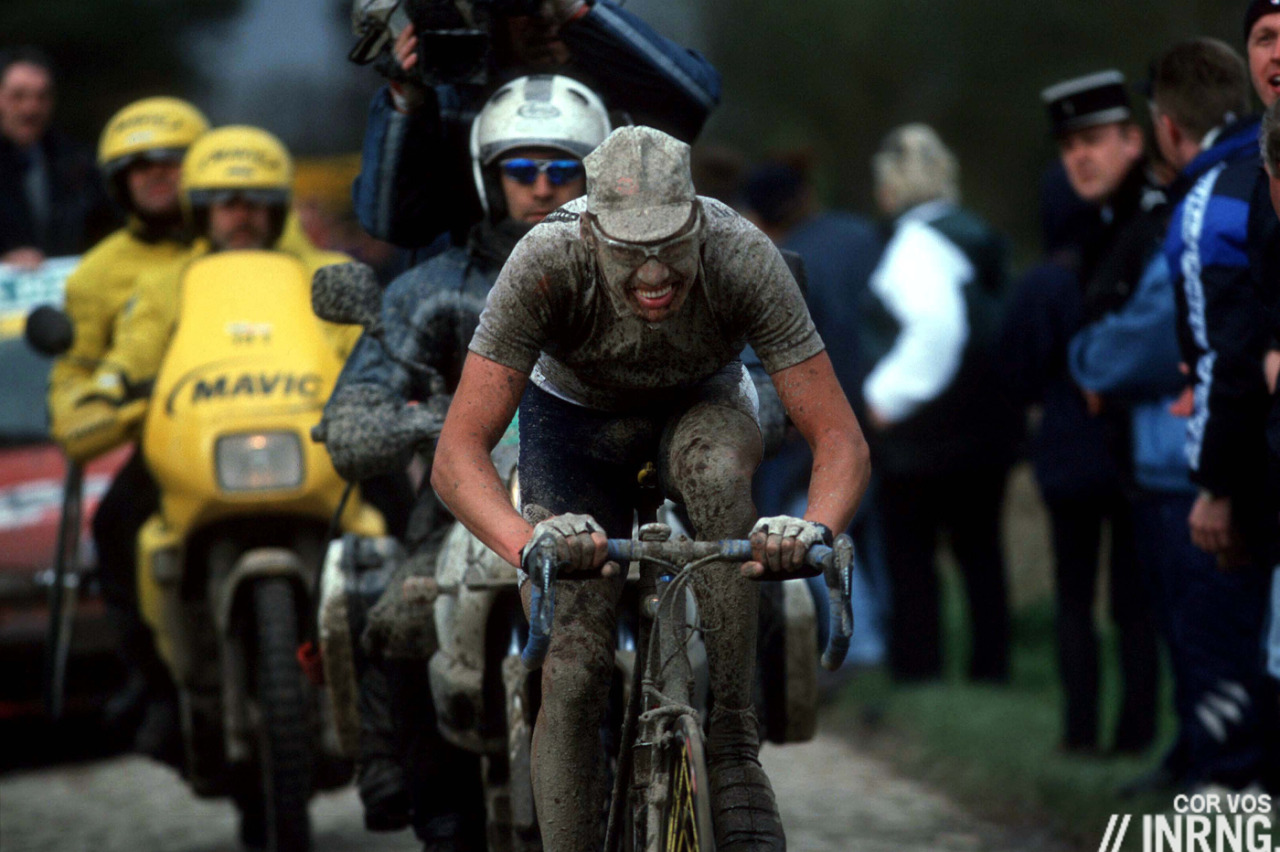 It looks like another dry Paris-Roubaix. It hasn’t rained in the race since 2002. Northern France is a wet place – riders from the region often move south in search of better training conditions – but as explored in a previous post here, early April is actually the driest period of the year for the area. Even the forecast for wind earlier this week looks to have faded away.

Direct Energie is now Total Direct Energie. As you might know the French energy provider was taken over by the oil major last year and now it’s being rebranded. The team is playing its part in this with Paris-Roubaix as the first race for the new team. The timing of the change has been done to coincide with Paris-Roubaix which says something about the race and the team’s use as a communication and branding matter.

Life imitated art the other day when Guillaume Martin won atop Mount Etna in the Giro di Sicilia. Martin’s “the philosopher cyclist”* who has a Masters degree in philosophy with a thesis on Friedrich Nietzsche and who has written a play. Now he’s written a book “Socrate à vélo” or Cycling Socrates and it’s the story of a team of philosophers invited to ride the Tour de France and also autobiographical as Martin describes his training and racing. One scene in the book includes Socrates and Plato training on Etna so things went full circle when Martin won. Less mindful but Brandon McNulty’s win is important for US cycling and it should keep open the door for more wildcard invitations for the Rally UHC team.

Rally still have their work cut out a wildcard invitations could get a lot harder. 23 teams told the UCI they’re interested in a World Tour spot for 2020 and beyond. But it’s merely expressing an interest, a far cry from an application. Cyclingnews.com had a scoop that legal action could see teams sue their way to a licence, essentially if Pro Conti teams are promoted into the World Tour then any current World Tour teams facing being dropped could get lawyers involved. The result of which could be 20 teams in the World Tour which implies the remaining UCI Pro Teams, the second tier squads, would be scrapping for two invites to the grand tours, thin pickings. In theory anyway, a story to watch. Some current World Tour teams don’t have long term sponsorship in place, for example Gerry Ryan won’t bankroll Mitchelton-Scott forever and the team still looking for new sponsors, earlier this year Chinese telecoms firm Huawei was cited as a potential backer.

Staying in Sicily, the 2021 Giro d’Italia is due to start in Sicily but where? This week’s Cycling Podcast mentioned off hand a rumour that it could involve a virtual prologue ridden online using Zwift as a platform. It’s not that far-fetched, the grand tours go where the money is and if Zwift wanted to pay millions for it then it could be arranged, and the UCI rules adjusted. Zwift is close to a tech “unicorn” status, a company valued at over a billion dollars, and like other technology ventures – think Uber or AirB&B – it wants to establish a market-leading position, something that means a big user base and can bring pricing power too. One route to achieve this is cultural dominance, to outspend rival platforms on marketing to the point where only Zwift seems to exist in the mind.. and buying the Giro prologue, or any other biddable race, would be a big way to pursue this.

There’s long been talk that the 2020 Giro d’Italia could start in Budapest and it’s getting louder. The Hungarian government is behind the deal and oddly the driving force behind the bid is none other than Viktor Orbán’s dentist, who is also big into cycling and triathlon. It wouldn’t be too far, nor too far-fetched given Italy and Hungary have a shared history of empire in the past and, skating quickly over thin ice, today their governments are aligned in some areas too.

Talking of febrile politics and returning to Paris-Roubaix, the Gilets Jaunes protests have been recurrent all over France since the autumn with regular, often weekly marches in major towns and cities. Named after the obligatory hi-vis vests that motorists must carry in their cars, it’s a wide ranging protest movement with varied demands and motivations and as yet no bike races have faced disruption in France. But the plan is to pause the marching this Sunday in Lille because of Paris-Roubaix because the police force is already busy controlling every junction along the route of the race; and also because of the Lille-PSG football match in the evening too.

Finally the Arenberg forest has seen the first part of the cobbles repaired with mortar placed in between the stones. It’s a case of things need to change in order to stay the same because the road is closed to traffic all year and because nothing uses the track, plants have been taking over. Each year the local authorities have gone through with a giant blowtorch to burn off the vegetation and then chase this with a big street cleaning vehicle equipped with a giant rotary brush to scrape off the dead vegetation and make it ridable for the race. But it’s been a losing battle. Interestingly ASO have had plans for years to detour around the forest if it rained because it would be too dangerous to use in the wet. Purists might howl but the repair works ensure the forest is just about rideable and the word from riders after their recon is that it’s still a fraught area and that the mortar just makes the stones feel harder, there’s less cushioning in between.