The weather forecast says there’s a chance of rain for this Sunday’s Paris-Roubaix. It hasn’t rained during the race since 2002, a bizarre dry run given we associate the spring classics with grim weather. In these safety-concious times is it ok to dream of a wet edition?

Some dry numbers
It rained during Paris-Roubaix in 2012 but only a few drops, enough to dampen the dust but no more. Instead we have to go back to 2002 for the last proper mud bath edition. It’s odd as Lille, the city next to the town of Roubaix, is equal 13th among Franc’s 118 cities for the number of rainy days a year meaning Roubaix and the surrounding area is one of the wettest regions of France. So why doesn’t it rain for Paris-Roubaix? It is just a statistical oddity, a fluke run? Partly but it’s explainable too. 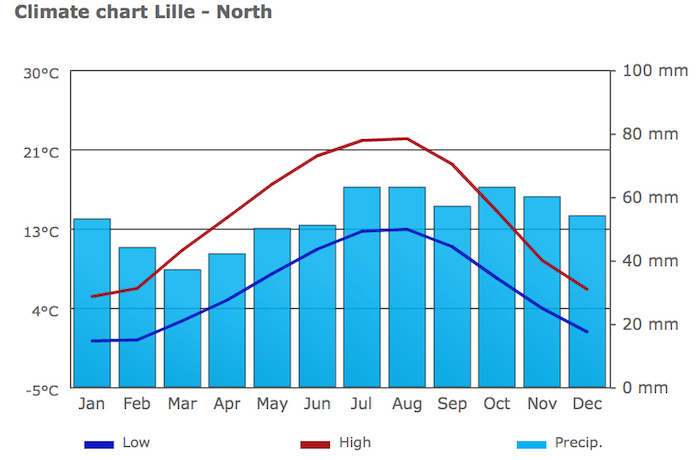 The chart above is from climatedata.eu and the blue vertical bars are precipitation, rain to you and me. The driest time of the year? Turns out it’s March and April. Summer is wetter which helps explains why the wettest edition of the Paris-Roubaix was… the 2014 Tour de France which borrowed several of the cobbled sectors. Safety?
There’s talk of skipping the first cobbled sector because of mud. Before you leap to the comments in outrage to post comments about this not happening in Bernard Hinault’s day, remember the course actually does change a lot from year to year and the conditions play a part in which sectors are included or not. The concern over the Troisvilles sector right now is because it’s got a downhill part and, as it runs down, it goes into a small dip between the fields with muddy embankments on either side. Here the soil has spread over the road leaving a good, thick coating of mud. The fear isn’t the mud itself but the whole bunch thundering into this spot at 60km/h and suddenly hitting the dirt. The rest of the course is muddy and wet in places but ridable in the traditional sense.

There’s something hypocritical about fans, eager to settle into armchairs and recline on sofas wanting rain for the sake of entertainment. In the dry the cobbles are risky enough so the rain just makes things worse? Perhaps, probably so even. We shouldn’t want rain because of the risk, craving a Wacky Races aspect is too much. Yet it’s not certain the rain makes things more dangerous, last Sunday’s sunny Tour of Flanders saw many riders crash out while the wet pavé stage of the 2014 Tour de France had its spills but only one abandon in Chris Froome and he pulled out because he had cracked his wrist the previous day and then fell again before reaching the cobbles. The peloton hurtles down slick mountain passes in the rain too.

Perhaps the argument for rain is because it’s normal, because it happens and because it’s about time. It rains beaucoup in northern France so a wet edition is overdue and this generation of riders and cycling fans alike have yet to see what it looks like. When Paris-Roubaix switched from its procession to the farm tracks used today in 1968 the race organiser Albert Bouvet feared he’d risk the wrath of the riders and stayed out of their way for a while at the finish before braving the showers. “One like that every year, ok, but not two” was the verdict of one rider as he washed the mud away. Similarly why not one wet edition for today’s generation?

Conclusion
The race is dangerous enough because of the legendary pavé and hoping for rain as a means to increase the risk and spectacle seems wrong. But it’s not certain wet conditions make the race any more dangerous, there maybe be crashes but there always are, just as last Sunday’s sunny Ronde saw too many. The Arenberg Forest is feared any day of the year. What we could hope for is to see the different imagery: no more dust clouds, instead riders caked in mud, bikes clogged with dirt and for a slightly more technical challenge where trajectory and traction count alongside pace and power.

It’s strange that we associate the spring classics with foul weather yet Paris-Roubaix has been dry for so many years. Dig into the data and it’s not as surprising as that, statistically this is the driest time of year for the region. During his long career Fabian Cancellara has made a name for himself in this race thanks to his long breakaways. Will he escape the rain?

Previous post: The Moment The Tour of Flanders Was Won