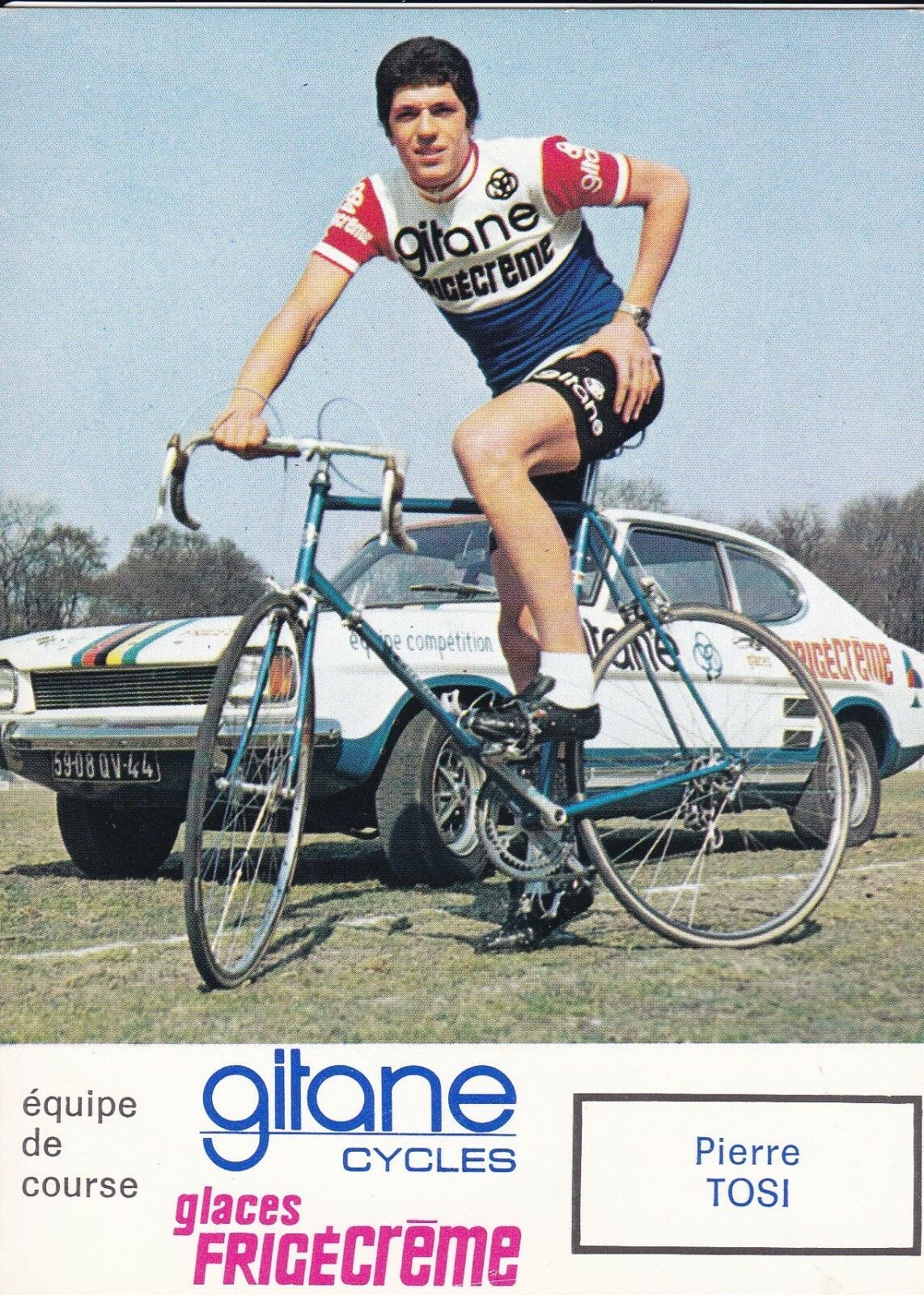 Pierre Tosi died on 1 April, aged 69. A modest rider, his very lack of achievement as a professional cyclist was the inspiration for the film Le Vélo de Ghislain Lambert.

Back in the days when Paris-Tours was a prestigious classic it was the one race that Eddy Merckx couldn’t win. “The Cannibal” had won everything else worth winning, and often many times over. Paris-Tours eluded him and 1972 winner Noël Vantyghem would joke that “Eddy Merckx and I won all the classics, I won Paris-Tours and he won the rest”. The joke’s on Vantyghem for his comparative lack of success but what of all the riders who end a pro career without a single win and who rarely tread a podium? There are many. Pierre Tosi was one and when asked what best career memory was by the Vélomane Vintage blog he replied:

When I beat Merckx for an intermediate sprint in Orléans, on the first stage of Paris-Nice, in 1974. He stayed on my back wheel

As L’Equipe wrote over the weekend he never started the Tour de France but did ride Paris-Roubaix once and started the Vuelta a España, only to abandon after three stages after getting a skin rash. He did get a podium finish, for example he took second place in the season-ending race Putte-Kapellen, the race that straddles the Belgo-Dutch border with a finishing straight that is shared by the two countries. But there’s an irony to the result, Tosi got a result after coming back from a big crash, only the moment he hits form the season is over.

It’s this tragi-comic aspect that makes Tosi notable. Many ex-pros start new careers after hanging up their bike, or even burying their machine as Pierre Brambilla did in 1947 after losing the Tour de France. Tosi became a builder. But he also made a cultural contribution because he became the inspiration for the cult film Le Vélo de Ghislain Lambert by Philippe Harel. The plot synopsis is the story of a loser, “born on the same day as Eddy Merckx, but eight minutes later“, a hopeless rider at the mercy of selfish team mates, hapless team managers and fickle sponsors, who nevertheless finds fame because of his losses, an everyman who the public relate too rather than a ruthless cannibal. The public watching Le Vélo de Ghislain Lambert will laugh at the slapstick of a wobbling cyclist flying head first over the handlebars into a ditch; those with more interest in professional cycling will laugh at the knowing scenes of riders taking the best bed in a hotel on the eve of a race, the hypocrisy of a team manager or other inside jokes about pro cycling – including a bike being buried – so it’s a cheap comedy on the outside but loaded with cynical in-jokes. The film is deliberate about Tosi’s inspiration, the credits explicitly mention him and there are other references, Lambert’s Magicrème team is the synthesis of the Gitane-Frigécrème team for which Tosi rode in 1973 and Magiglace-Juaneda in 1974. The film draws on many anecdotes from the sport and Tosi gave plenty of them to Harel. 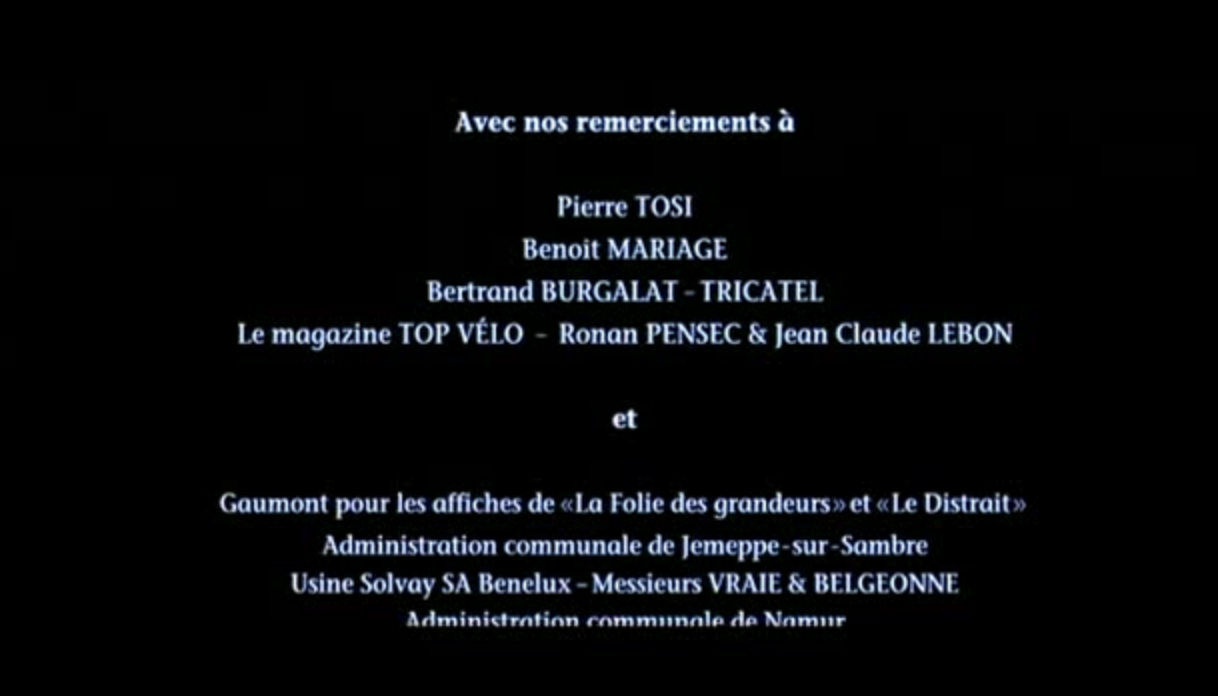 If the film is a comedy, Tosi’s cycling career wasn’t such a laugh. It’s not his tragedy, it’s a collective one where he and most of his peers found it a constant struggle just to get a contract and professional cycling was often amateurish in reality. While we look at the 1970s as a mythical era for cycling with the riders, the personalities, the lapels, sideburns and more – look at the team car behind Tosi in the picture above – the reality was not always as glorious. In the mid-1970s the going rate for a pro cyclist was 500-1,000 francs a month in France when the national minimum wage was 1,000 francs, and as Tosi joked in 2013 to the Vélomane Vintage blog that he was still waiting to be reimbursed for his travel expenses. He went bought his own Italian frame and have it resprayed as the team-issue bikes was too flexible. Tosi had a hard career and when this summer’s Tour de France celebrates Eddy Merckx’s illustrious career, take a moment to remember that if Merckx won almost everything, he didn’t win the intermediate sprint in Orléans in the 1974 Paris-Nice. Pierre Tosi did.