As part of the series looking at roads featuring in major races, here’s a look at Yamabushi pass. Neither household name, nor familiar in the peloton, this is the first major climb of the 2020 Olympic road races and an ideal day’s ride out of Tokyo too.

The Route: National Route 413 starts just outside Sagamihara and climbs the Dōshi valley to the Yamabushi pass at 1,100m above sea level. It is 38km long with 1,143m of vertical gain.

The Feel: By some measures Tokyo is the biggest urban area on the planet and once you turn onto the 413 it feels rural, the switch is sudden. Almost, as there’s a waste plant on your left with refuse trucks buzzing in and out like worker bees. You could almost hold your breath to pass. The road dips down but isn’t this is supposed to be a climb? The average gradient here is deceiving, the road rises and falls more than the profile suggests and the first half has several short climbs and descents. The valley here is wide with small farms beside the road, the soil raised into neat rows, one of many micro differences between a ride here and Europe. Often the Dōshi river is obscured by the trees or the sheer drop down below but you cross several giant bridges which invite you to stop and peer down at the water, as clear as junmai daiginjo sake.

The village of Dōshi is both the halfway point and the start: halfway probably in time to the pass ahead; the start because the climbing picks up here. The village is elongated along but there’s not much for the visitor. A large banner hangs outside the town hall boasting it’s an Olympic venue.

As you leave there’s a small convenience store but if you want to stop, press on because soon there’s a Michi-no-Eki, a roadside station in English, and designed for the motorist or coach tour to pull over, stop, rest and eat. Widespread in Japan, they’re designed to have a local feel, perhaps the architecture and certainly the food for sale and if the raw vegetables aren’t ideal, various rice-based snacks and confectioneries are. There’s a bank of vending machines outside selling drinks. It’s ideal for the passing cyclist to fill up bidons and pockets. Is the bear mascot above that greets visitors here a cyclist? 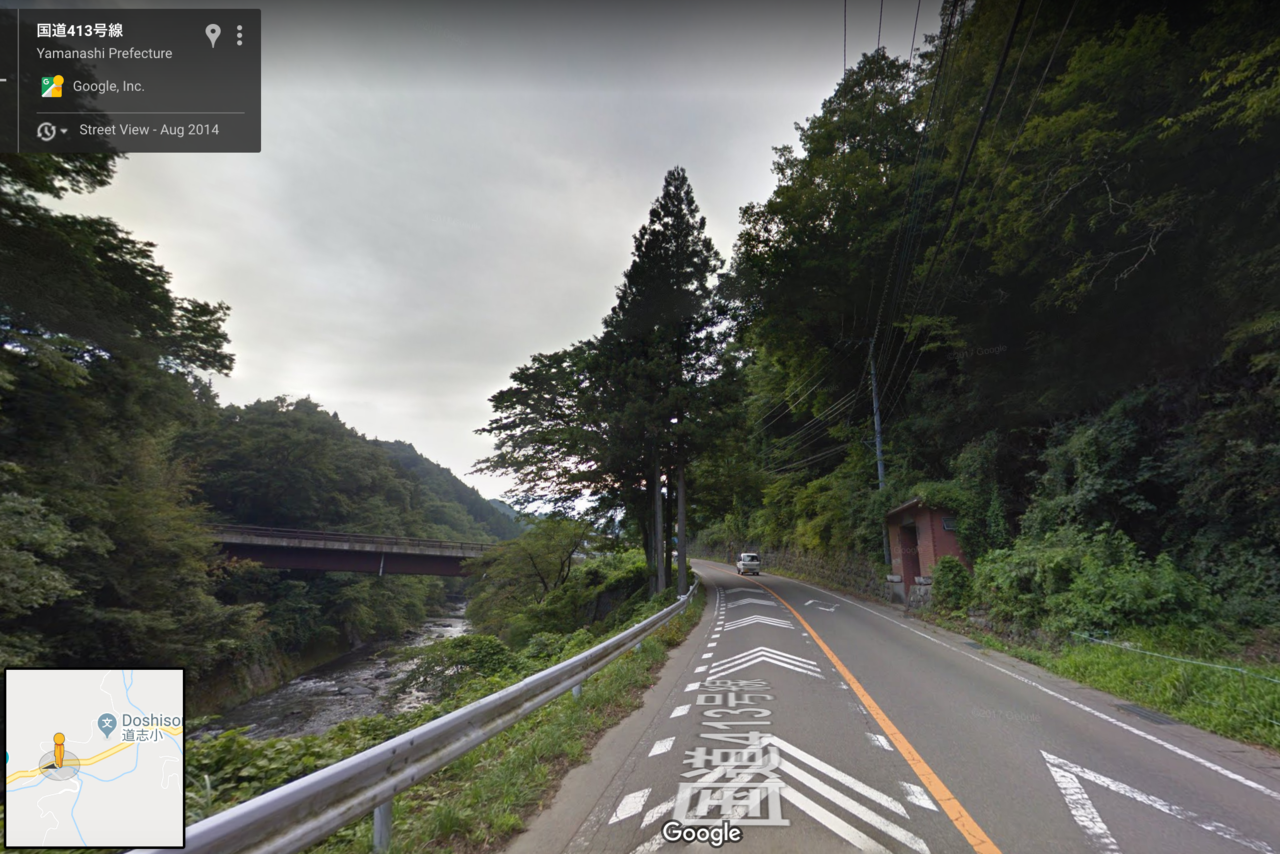 Onwards and the slope picks up, but it’s only 3-4% rather than the usual 1-2% so far and all on the same smooth tarmac but there are fewer buildings. It’s lined by pines and cedar trees and has a wilder feel, you’ll smell damp forest and spot scary mukade centipedes on the road, the white water torrent on your left is now just a stream. The slope picks up towards the top and there’s a wide hairpin bend and the end of the climb is in sight. 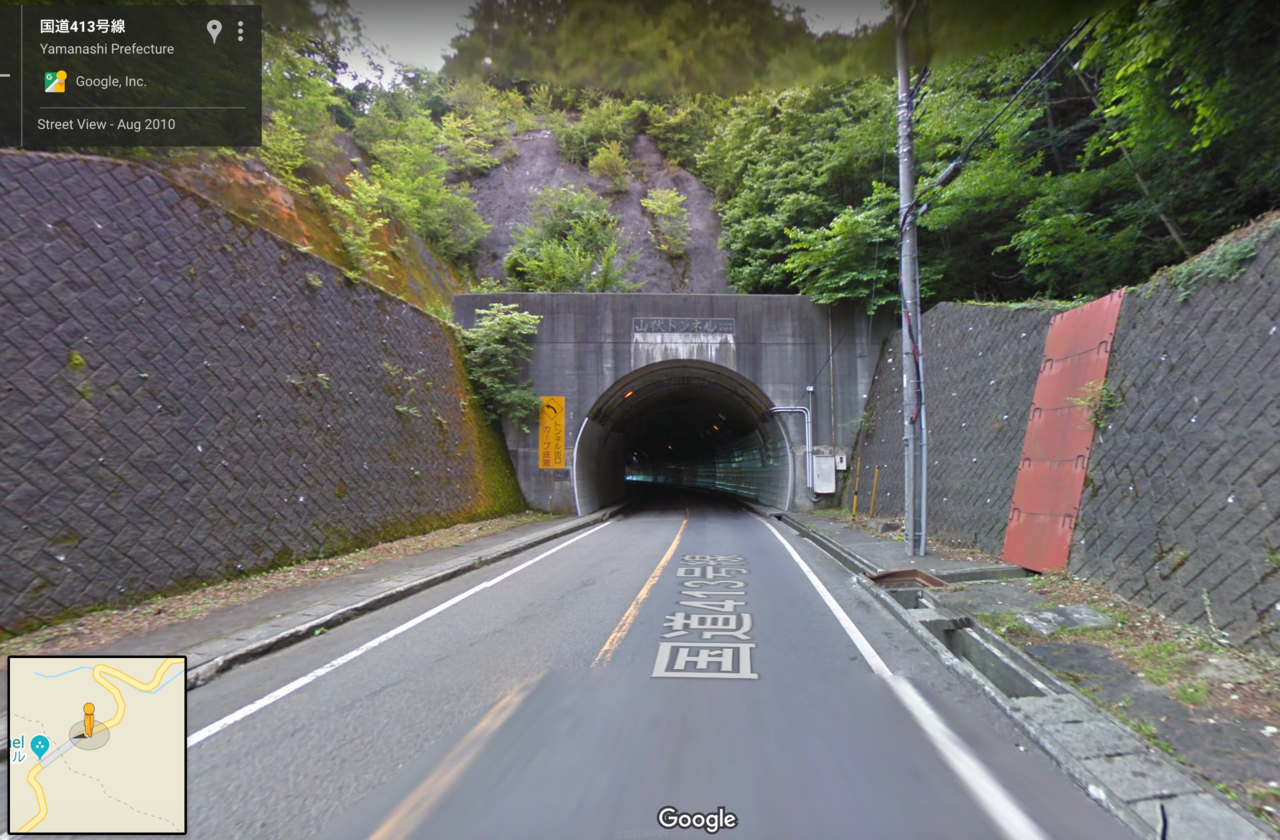 This isn’t a pass you go over, but through. There’s a short tunnel with concrete surface indented with groves just about the right size to sink your tires in, they’re not deep like tram tracks, nor the “valley of death” on a betonweg but enough to preoccupy you and influence steering. Emerge from the tunnel and you can stop to put on a jacket or gilet if it’s cold but the descent down is short, you’ve reached a plateau. Oddly the roadside is littered with tennis courts, most of which look abandoned. What happened? A tennis boom that turned to bust? A weird tax break? Just as you ponder this the road bends and Mount Fuji comes into sight and the stunning view of the vast conical volcano takes over your mind, it’s mesmerising, both beautiful and ominous.

The Verdict: a long climb but not a difficult one. It doesn’t look decisive for the Olympics but it’s over 1,000m of vertical gain early in the race and it’s the sort of climb where the strong teams will each use up a rider to set the pace. For the local or the visitor it’s strategic if you’re in Tokyo and want a ride into the mountains, it’s scenic but busy on weekends.

Ride more: keep going and you pass the countless tennis courts and the Marriot hotel – a likely base for teams racing the Olympics – and reach Lake Yamanaka and you can take other roads to the north (say Otsuki and the railway line) or south towards Hakone, or just ride back down turning the long climb into a shorter descent.

You can also take an scenic detour, turn off the 413 in Hokyoji (宝鏡寺) and you cross the Dōshi river with spectacular views of the river and then climb up a quieter road – passing the Team UKYO service course – and then the Dōshi dam before you can rejoin the 413 again.

History: I couldn’t find out if this has been used before in a race like the Tour of Japan but so it’s the future that puts it on the map given the 2020 Olympic road race will go through. It’s the first climb of the race – labelled Doushi road above – and both the men and women’s pelotons will climb it, unlike some other parts of the course. The race finishes far from Tokyo but for reasons of municipal pride and politics it has to start in the suburbs meaning a procession across uneventful roads before the Tama hills and then out to this climb.

Name: Yamabushi pass gets its name from the ascetic mountain priests and hermits of Japan. yamabushi (山伏) means mountain and to prostrate oneself, it’s for those who bow before the mountain, this blog’s kindred spirits. There’s a following today in Japan, many lay practitioners will dress in the white robes and participate in various activities, such as chanting while sitting under an icy waterfall, less appealing. These people have an intense and comprehensive appreciation of the mountains.

Travel and access: it starts 50km outside of central Tokyo and a long ride given all the junctions, traffic lights and more if you were staying in town but the traffic is safe, it’s not Copenhagen or Amsterday but it’s not far off at times with many locals on mamachari bikes. You can take your bike on any train in Japan as long as you pack it in a “rinko bag”, a small unpadded sack, normally you remove one or both wheels and some bags fold up small enough to fit in a jersey pocket or you can stash it in a coin locker at the station.

There’ll be a piece looking at the Mikuni pass on here soon, likely the decisive climb for the men’s road race. More roads to ride at inrng.com/roads