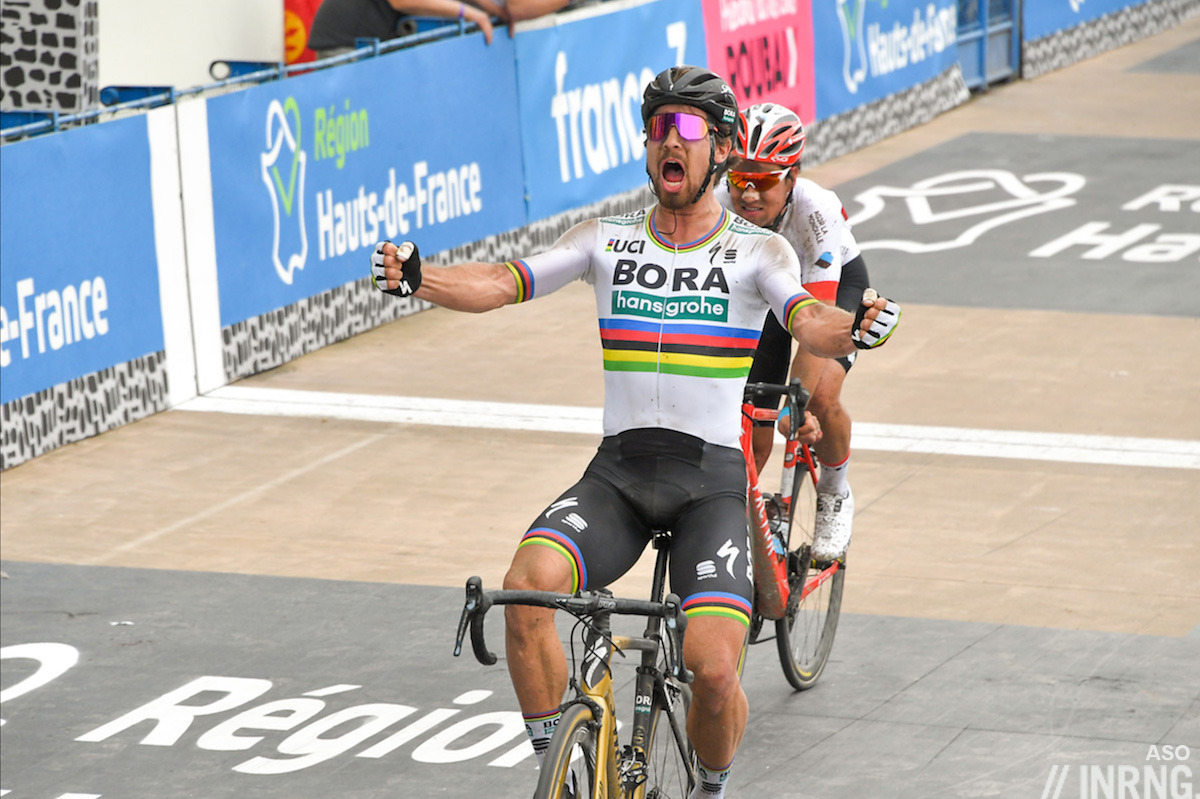 Who is Peter Sagan? He’s the rider in the green jersey and the rainbow bands, the one who does the wheelies, the videos and more. Yet for all the iconic images and animated GIFs the person behind them seems elusive so here’s his autobiography with 260 pages to explain more.

L’Equipe’s Philippe Brunel, who has seen some champions in his time, has put Sagan alongside Merckx for the way we describe how others may win races but it is also a story when Sagan loses. In Merckx’s case it was because the Cannibal won so often, so compulsively; with Sagan it is perhaps more because he’s a media phenomenon too, the kind 12 year olds will have posters stuck to their bedroom wall, so his autobiography is bound to be of interest to cycling fans and possibly a wider audience too.

“My World” is structured around his three world championship wins with substantial chapters devoted to first-person accounts of these triumphs. It makes a change from the routine rider autobiography: childhood, their start in the sport, the rise up through the ranks, turning professional, the first pro win, more success, sometimes a setback or two, then more wins. Departing from this is interesting but the result is the book skips a lot of the background to Sagan’s pro career to focus on what we already know, namely he won three rainbow jerseys. There is a section on his early years but it’s brief and at other times the book touches on his upbringing, family life and suchlike but it’s oblique at best. I remember a Slovak TV report with his devout mother packing rosaries into his luggage before a Liquigas team camp, the kind of scene the book doesn’t cover.

It’s ghostwritten and at times the voice is that of a Briton rather than a Slovak, for example the second page describes his approach to the World Championships in 2017: “suffice to say the last fortnight was not the preparation I’d had in mind”. This feels like a turn of phrase an Englishman might deploy in between sips of tea, rather than Sagan. Sagan can communicate in English but he’s not fluent, his Italian is better but ideally he’d have told his tale in Slovak for translation. Similarly if the audience is mentioned, at one point he says you are probably a “roadie” if you are reading, non-cyclists might struggle with some references, for example we know what pavé means but the wider public may not.

I got a preview copy and it’s possible things were corrected prior to publication but there were several errors. Rival sprinter Matteo Trentin is called Guido, a mix up with the homonymous ex-pro. “Michal Kwiato” is mentioned throughout the entire book, a more casual sports fan might be confused as it’s never once mentioned this refers to Michał Kwiatkowski. Slovakia is part of “Soviet Europe”. Sagan says he had no Slovak riders to look up to before Ján Valach came along, although Giro stage winner Jan Svorada might have something to say about that even if he did later switch to Czech nationality. The book has Sagan recounting an anecdote about Sean Kelly and Adri Van der Poel but is Sagan a student of race history? He was once asked by a French journalist if, of all the past riders, he thought he resembled Sean Kelly the most, only he didn’t understand the question as he’d never heard of the Irishman. There are pages dedicated to his wife and their marriage but they announced their separation back in July.

You do learn more about Sagan, especially his entourage, “Team Peter”. It’s common for star riders when hired to come as a package with a trusted soigneur, a mechanic or a leadout guy. Sagan too with his agent Giovanni Lombardi as well having his own PR handler and general gopher in Gabriele Uboldi and their set-up is explained. While some riders and staff plan how to win races, Sagan and his crew almost assume he will and make dares and bets with each other should he win: a tattoo here, a sports car there. “Why so serious” is a mantra throughout the book, he’s out to enjoy life and doesn’t bore the reader about watts, diet or ascetic training regimes.

Sagan doesn’t give us too much new info. He briefly mentions he bought some land, started building a garage for his cars – is he a car enthusiast? – added some living space, one thing led to another and it ended up as a sports centre to house promising Slovak athletes. It’d be interesting to know how and why this all went from a parking lot to a sports facility, perhaps it might tell us more about him? We get more on the years with the Tinkoff team. One day Oleg Tinkov declared he wanted to cut Sagan’s pay after he missed out on the spring classics. The threat to shred Sagan’s contract prompts him and his agent to check their small print by which time Tinkov has laughed and forgotten about it.

He seems to have gotten into cycling thanks to his older brother Juraj. Why is Sagan just so good? It’s never explained, no VO2 Max or data feature nor how he got those technical skills although as a child he’d play in the woods while Juraj sat in front of the TV watching Marco Pantani, so we’re left extrapolating from a couple of lines about an active youth to early mountain bike riding and when he resumes the MTB for the Olympics the reflexes come back quicly. He does explain some of his approach to sprinting and that he probably won’t bother to challenge or change his body type, he won’t be targeting hilly stage races any time soon. He also mentions a recurrent hip problem which might explain his sometimes asymmetric position on the bike. 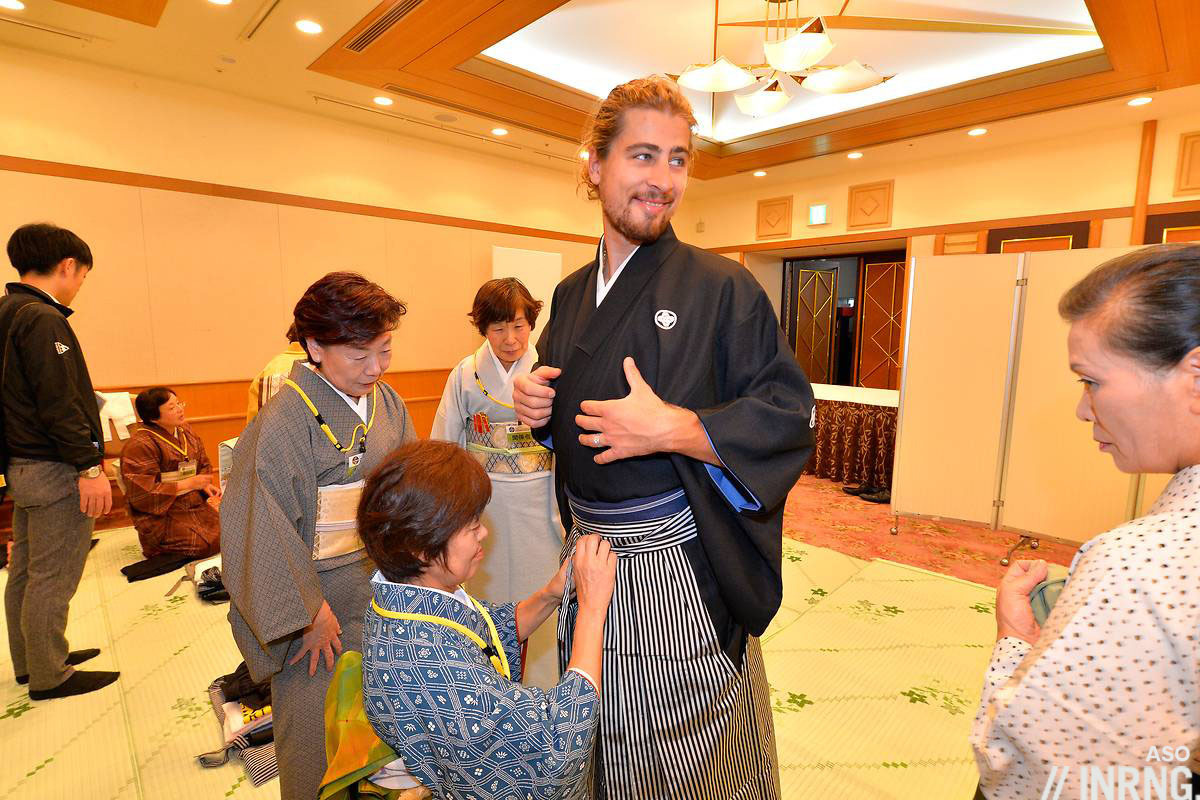 The Verdict
An easy read, “My World” tells only a part of Sagan’s story. There’s much on his three world championship wins, a remarkable feat with detail added such as his expectations ahead of the race to his cornering technique in the final moments. As such it’s more “My Rainbow”. Yet we know he won the worlds already, surely it’s the other parts of Sagan’s world that fascinate, from his background to his talent and skill to his atypical charisma and his view of the world around him remain largely unexplored. It’s fine to be guarded about private life but at the same time he does explore topics like family life including celebrating his marriage which has ended prior to this book’s publication. If he were to read this review he might say “why so serious” but the UK edition is £20 for the hardback, which is a lot. If there’s a diligent Slovak biographer out there – and perhaps they are sensibly waiting for his career to end before drawing conclusions – then there’s a good read about the Sagan phenomenon to come out one day.