The Moment The Worlds Were Won 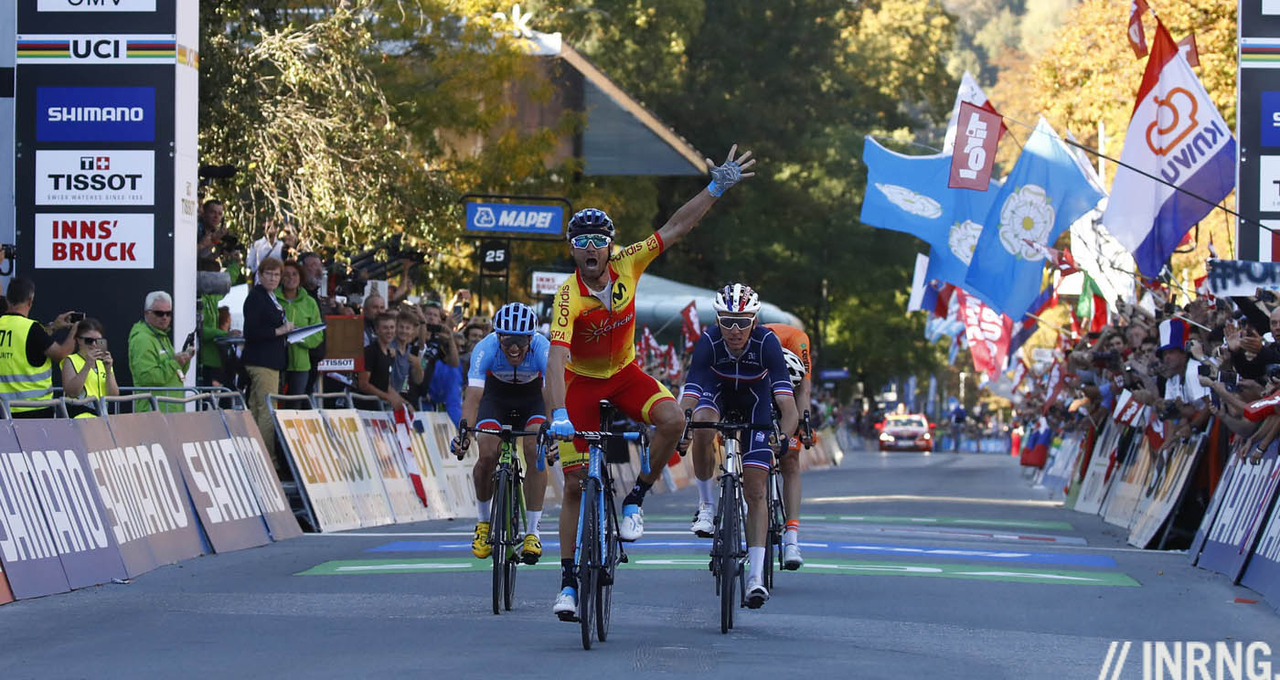 350 metres to go and Alejandro Valverde leads. He opens up the sprint and wins, holding off the challenge by Romain Bardet to stay clear and finally land the gold medal and rainbow jersey that had eluded him.

The day began in glorious autumn sunshine and Innsbruck has been a good host, a model to copy. If only more winter sports destinations could bid for the worlds but for most ski resorts late September is close season with the summer tourists long gone and no snow expected for months. Still there must be more Alpine towns able to host the worlds and put themselves on the map as a cycling destination, think Annecy in France or Bassano del Grappa in Italy. We’ll see what the joint Aigle-Martigny ticket brings in 2020. 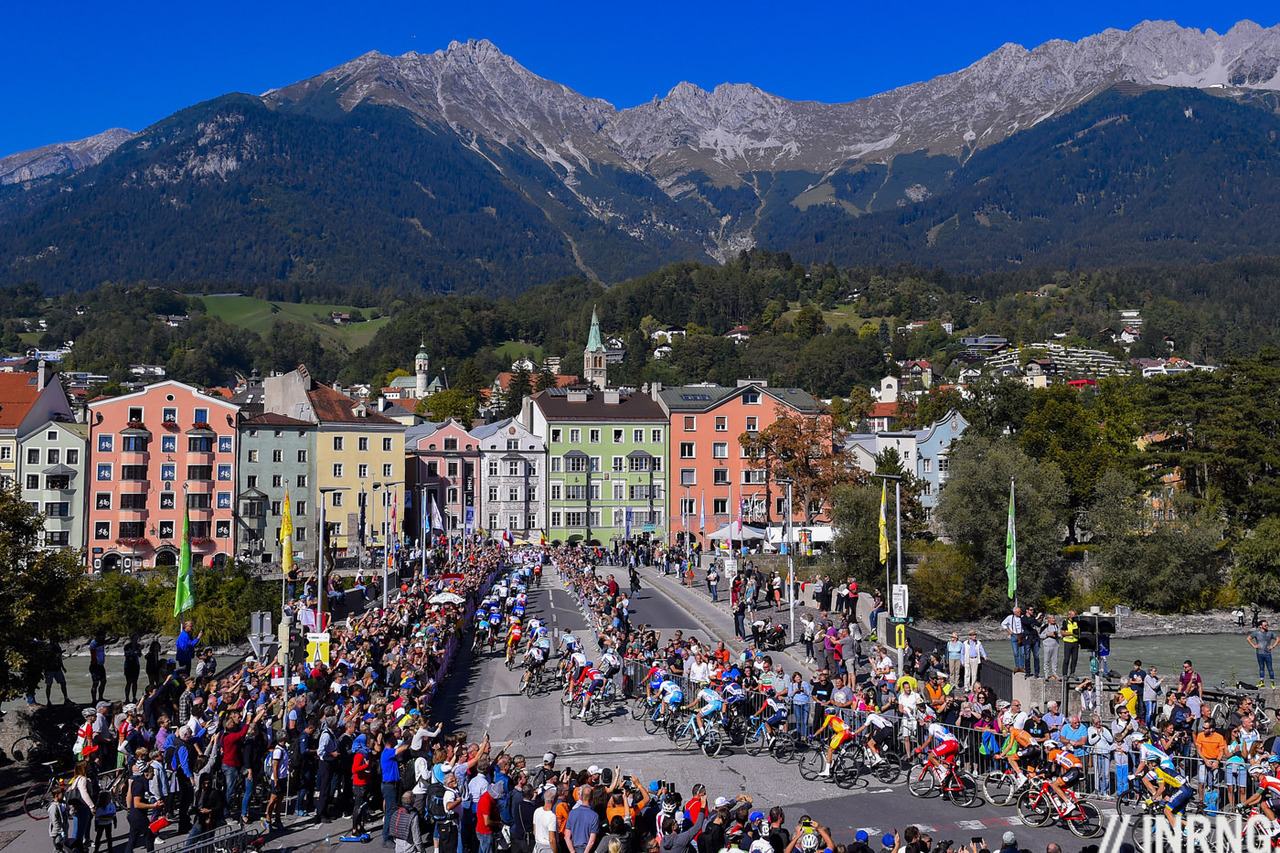 The early breakaway went clear and their lead reached 18 minutes at one point. Huge but as the race proceeded up the Inn valley it was inevitable, a lot of heavyset rouleurs were in the move and behind the teams with ambitions for the day hadn’t bought many riders to chase on the flat valley roads. Once the race reached Innsbruck and the Alpine circuit the lead began to fall steadily.

It wasn’t just the lead falling. Warren Barguil and Primož Roglič literally as they crashed, Barguil left the race injured, Roglič chased for 10km and got back on. Others fell out of contention. On the penultimate “Olympic” lap many fell away including pre-race picks Simon Yates, Wout Poels and Michał Kwiatkowski. Much of this was down to the work of the Dutch and Italian teams. In fact there was a long phase of the race where the Italian team were at work, it began with Dario Cataldo’s attack with 66km to go and ended when Vincenzo Nibali was among those dropped later on.

On the last time up the Igls climb there was a flurry of attacks. Peter Kennaugh got a gap but was counted by Denmark’s Michael Valgren who led down the descent with a chase led by Rui Costa ahead of a group of containing Kennaugh, Thibaut Pinot, Ion Izagirre but all with the bunch close by. Valgren though opened up a lead of 30 seconds, it was impressive but he need a lot more as a buffer for the final climb.

Into the final climb billed as “hell” with its 20% pitches and the French team set to work with a mountain train, first Rudy Molard who dropped off to leave a tricolore trio of Thibaut Pinot, Romain Bardet and Julian Alaphilippe, a scene that must have had veteran French team boss Cyrille Guimard purring with delight. Only this would have been short-lived, this was where Alaphilippe was supposed to launched but he misfired like a damp firework leaving Bardet suddenly tasked with “saving the furniture” as they say in French. But in no time the peloton had vanished – partly down to the struggling TV production –  and the contest was quickly reduced to Bardet, Michael Woods, Alejandro Valverde and the brooding presence of Gianni Moscon. Moscon looked like he was in trouble and began to make handling mistakes and trying to get his weight power over the back wheel meant his front wheel veered left and this put him into the rough and if he tried to get going again the effort needed was too much and he was out of the picture. A few seconds behind and Tom Dumoulin was pacing himself in a chase. 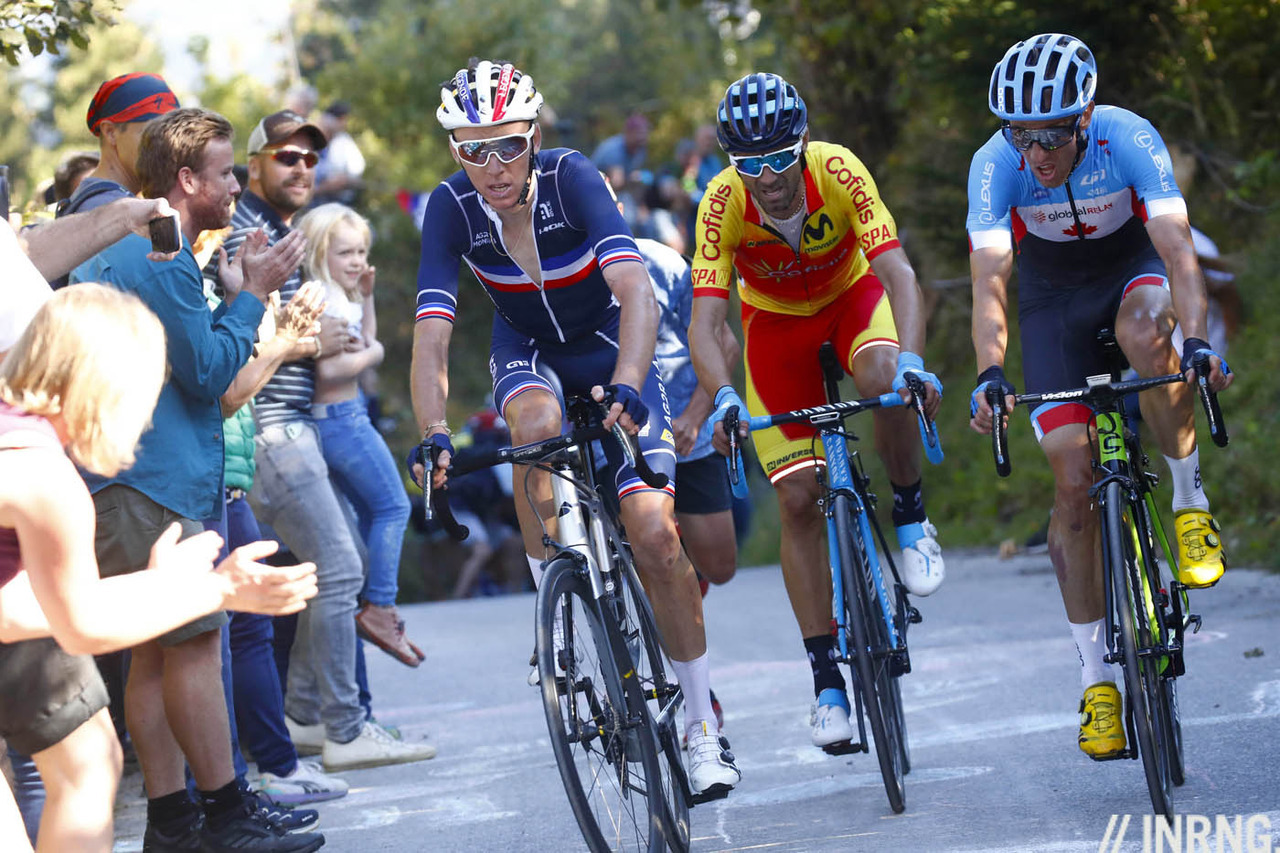 On such a steep slope it was near impossible to attack but Bardet had a quick shake but dropped his chain, for a moment he looked to have lost it but was back. All along Valverde was present but not needing to provoke any changes to the scenario: Woods and Bardet for company was surely the dream scenario, little threat to him in the sprint but they needed to keep riding to hold of the chase of Moscon and Tom Dumoulin.

The result seemed inevitable but Valverde launched with over 300 metres to go, a distance where even Alexander Kristoff or Arnaud Démare might hold back. As much as Woods and Bardet seemed to be drawing closer the result was inevitable. 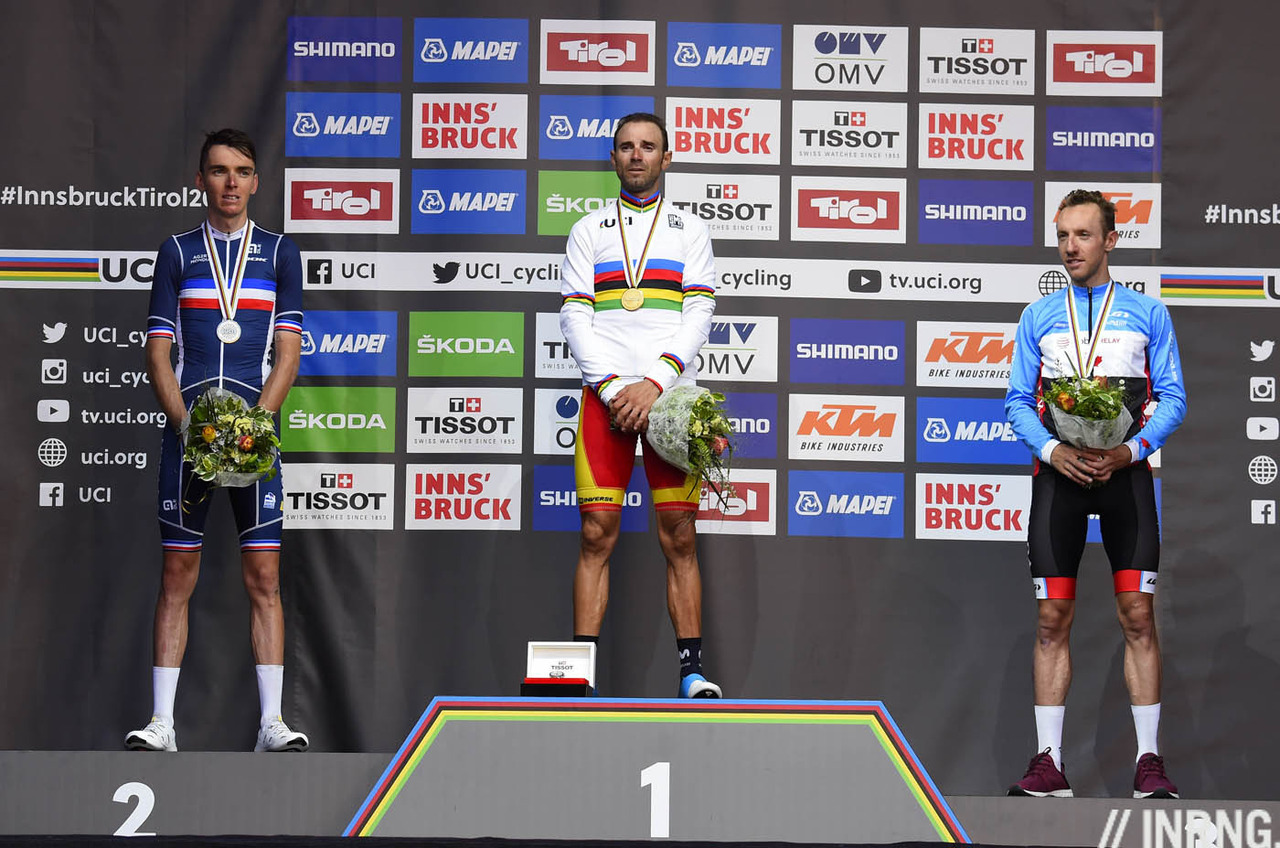 The Verdict
An exciting race to end an enjoyable week. The race came alive in the final hour although it wasn’t total suspense, this was a race of attrition as is often the case with the worlds. The TV production was middling, the KM to go caption went missing towards the end and for long stretches at a time when the action was happening in the final lap we got helicopter shots filmed from on high and little else.

Valverde wins and was delighted, bordering on overwhelmed by the win. There’s usually a swagger about him after a win but this time he was in tears, this wasn’t just another win for him. The win fills the blank on his palmarès, it’s it’s hard to name something else he could win, or at least a race. The one thing he’s yet to do is win over skeptical observers, he comes with as much baggage as Barajas: suspended for blood doping and only after a long chase that finally had him convicted thanks to a DNA match which he protested rather than apologised for. This is old news and has been every time he’s won – which is a lot – but he becomes more of a figurehead with the rainbow jersey on his shoulders. Is he that good, a crafty poker player? Or the second oldest World Champion after Joop Zoetemelk thanks to old habits? You probably don’t know, I don’t know and so guessing will probably say more about you than him.

Romain Bardet and Michael Woods surround Valverde on the podium, deserving rewards for their punch on the final climb, not just to launch the moves but to have the energy in the first place. Bardet didn’t ride the Vuelta but adds another podium this year after the Strade Bianche and Liège, Woods did ride the Vuelta and parleyed a stage win into going the distance for this one day race. A chocolate medal as the Spanish say for Tom Dumoulin, already a star rider with only two wins this year, each a time trial stage win, but second overall in the Giro and Tour and silver in the time trial earlier this week, and still aged 27, so if he’s not go the wins this year it may well be a matter of time.