You’ve surely watched the Tour de France on TV but have you seen it for real? The Tour belongs to the crowds and readers regularly email in questions about visiting the race. With this in mind here are a few suggestions and tips to help plan ahead.

Route and maps
The maps and full route details tend to be published on the letour.fr website in May and not before. This is a sub-FAQ with people emailing in to ask where they can find a route map because they’re not online: they don’t yet exist. It is frustrating because many want to make plans for holiday visits but can’t find the route. I’m told one explanation is that if the route is presented every October it has to get validated by all the layers of local government in France and getting every assembly, council, mayor to say oui can take time with decisions to route the race through a village or around it in play and in turn if the used road needs to be resurfaced – you can probably spot the Tour route from space in late June by all the fresh blacktop – which leads to budget discussions and so on. Whatever the reason you don’t have to wait, it’s possible to work out the route yourself, you can take a stage profile and work out the likely course between the towns mentioned, easier for mountain stages where there’s often only one route but not too difficult for other stages either. Start or finish?
The Tour de France is so big that it tends to be more fenced off than other races and both the start and finish areas can be frustrating because of the crowds and the segregation where you need a pass to get inside. But even those with a pass, like the media, find most of the riders remain in the team bus for as long as possible rather than strolling around the village départ. On balance the stage start offers a bit more access as riders mill about and you can walk by the team buses, check out the bikes and more and things get lively with all the teams in place with an hour to go before the listed start time. 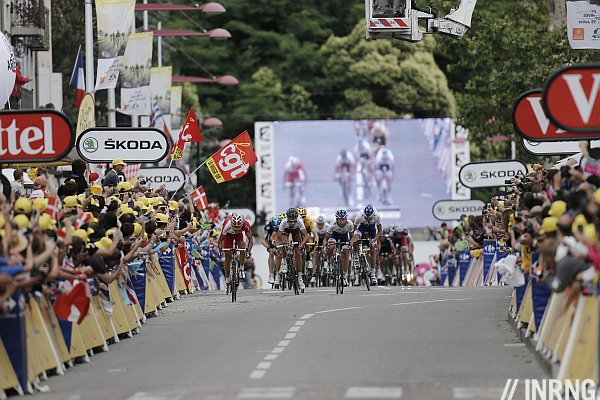 The finish is worth seeing too but requires planning and persistence, if you want a roadside spot you’ll need to get there early as the crowds build with hours to go. Pick wisely and you can stand near the finish and within sight of a giant TV screen so you can watch the race. The publicity caravan will pass and the riders flash by. Beyond the finish line is a cordoned off zone but keep going a couple of hundred metres and you’ll often find team buses and vehicles – the exact configuration varies – and you can spot the riders and staff.

Getting a pass: you need to have some connection to the race, to know a race sponsor or someone linked to the start or finish for your lanyard open sesame… or you can buy one from a Tour travel operator, expect to pay a few hundred euros. 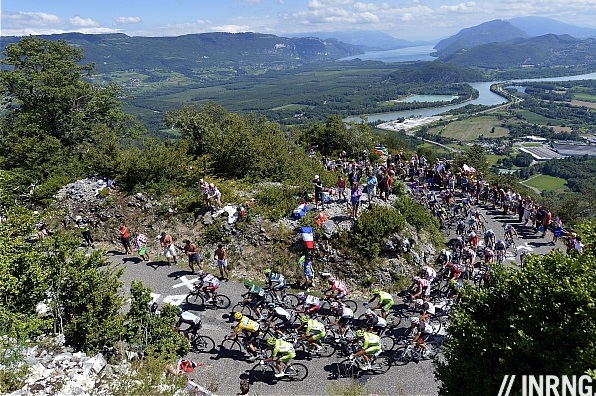 Roadside
Outside is free and perhaps the best way to see the race is to pick a scenic spot and enjoy a picnic. Imagine being sat on the hillside pictured above, the race passing would almost be incidental to enjoying the views and local foods. So far so sybaritic but getting there needs planning. The stage route will be closed to traffic in the morning and mountain passes could be closed at dawn. You can approach by car on a sideroad, park and walk to your spot, probably following many others too but this is not possible for many mountain passes where you’ll have to park near the foot and make your way up: be prepared for a long walk.

You can ride up as the police will tolerate people walking and riding into position but from about three hours to go the road becomes off limits for cyclists with the gendarmes stopping cyclists. But thing about where to stash your bike, it’s unlikely to get stolen but you may want to lock it to something so that on the off chance there’s a thief they boost someone else’s ride instead.

If the weather is good set up camp with food, drink and sit back. If you’ve come equipped you’ll probably find others doing it better with folding chairs, an umbrella for shade, perhaps even a TV or even a fridge for cold drinks. If it’s bad then a local café is a good idea as it will probably have warm drinks and TV and all the locals will dash out in time for the action. Waiting: A parade of vehicles will go by including the bizarre publicity caravan and then things go quiet until the whack of helicopter rotors announces the race is coming. This is a long wait to see the riders speed past, so much that it’s culturally accepted in France, for example the 2001 film Amélie features the line that “luck is like the Tour de France, you wait ages for it only for it to pass quickly” or the apparent explanation behind the title of Beckett’s Waiting for Godot. But that’s the point of the picnic, aim for a day in the countryside rather than watching the race unfold.

Which stage to watch? Take your pick from 21 stages. Many will go for the mountain stages and they offer a longer show with up to 40 minutes between the first and last rider and things you don’t see on TV such as the dropped riders and the gruppetto and the ability to actually see the riders as they go past at 15-20km/h rather than 50km/h. But easier said than done as the roads are closed early meaning access is harder. Even if you drive up the day before you’ll find most of the vantage points already occupied by camping cars and other vehicles so one suggestion is to ride up in the morning instead, after all many readers will be visiting in order to ride in the mountains as well. Just take a backpack with clothes appropriate for the day’s weather, food, drink and some shoes so you’re not click-clacking in your cleats. Race hotels
The riders want and deserve their rest and you may never get over the sight of your preferred rider in natty knee length compression socks but a hotel is still worth a visit if only to see the mechanics at work as they clean bikes, vehicles and get laundry done.

Rest day
Riders typically head out for a morning spin and amateurs tag along like suckerfish but don’t get in the way. Again you can see the mechanics at work in the hotel car parks.

Accommodation
Plan ahead. The Tour de France is a travelling circus and the riders, team staff, officials, media and more need a bed for the night. Some of the race workers sleep in special buses but otherwise the race hogs a lot of hotels and that’s before others have made their bookings to visit the race on top of all the millions of tourists who visit France every summer too.

Why not visit another race? The Giro and Vuelta are good too, for example the start zone at the Giro is almost open to everyone. In general the smaller the race the easier are, you’ll get better access, be it transport or to the riders. For example the Route du Sud in late June promises the peloton plus the Pyrenees minus the traffic and crowds; or the Italian national championships offers a lively circuit race around the same time of year too. Of course readers in, say, the US, Australia or Japan are unlikely to fly to Europe for niche races but if you live closer and have seen the Tour de France already then trying a smaller event can be rewarding too.