The UCI has announced several changes for the World Tour in 2018 including smaller team sizes for the grand tours, a topic covered late last year. Another novelty is going to be tested in the Tour de France starting next week, where the time gap to classify a group of riders, versus a split in the field, goes from one second to three seconds. It’s to help safety in the finish but will require a perceptual adjustment from inside the peloton and the outside.

The current system: a group of riders finish with the same time as the first member of the group to cross the finish line and the group is defined by no more than a gap of one second between all the riders, as soon as a gap wider than one second is measured then a new group is labelled and the second group gets the finishing time of the first member of this group and so on. The time gap is measured on the finish line, first by the timing mats and chips on the bikes for a provisional result and then confirmed/adjusted with a photofinish camera capable of measuring to the nearest one thousandth but adjusted to the nearest second.

New for the Tour de France: and the grand tours in 2018 that a group of riders will still be a group as long as riders are within three seconds of each other. Here’s an excerpt of the UCI announcement:

The revision changes the time gap for a split to three seconds – instead of one – and is intended to address the issue of increased stress and risk during Grand Tour bunch sprints, while retaining the sporting integrity of the sprint and stage.

We can infer that this rule relates to the so-called “sprint stages” only (update 26 June: Stages 2, 4, 6, 7, 10, 11, 16, 19, 21), and likely to be those where the Three Kilometre Rule applies and not to mountain stages and uphill finishes. It’s another way to address some of the concerns over the Three Kilometre Rule which have been voiced from time to time in and around the peloton. 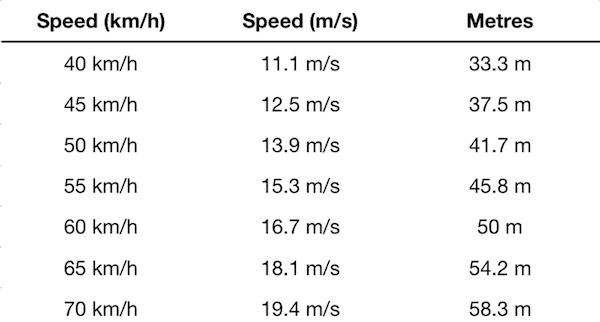 Will it solve anything? We will have to see. We can run through the physical effects but whether this is accepted psychologically by the peloton remains to be seen. The table above shows the distances involved for a given speed across the finish line. At 60km/h a gap of 16 metres is still within one second and with the new rule at the same speed the gap can go out as far as 50 metres and riders will finish on the same time. By definition this allows more room in the finishing straight, riders no longer have to be bunched together so tightly and should it reduce the pressure on some riders to fight for every metre, especially when coupled with the three kilometre rule. But it’s no panacea, when the Tour de France thunders into town the pressure is on and we will still see some teams with overall ambitions racing for the three kilometre banner in order to place their leader inside the safety zone. Everyone in the picture finished on the same time

It’s not just the peloton: watch on television and slow motion replays of a sprint finish and in time we’ve got an instinct for spotting a gap only now everyone has to reset their impressions. This changes the habit of a lifetime whereby a group gets the same time as long as they finish as a group, the group can be spread out over the finishing straight and may not look like group but as long as there’s no gap larger than three seconds they all finish together. Reductio ad absurdum it means if the riders came in at 50km/h then each rider could come in every 2.99 seconds and be spaced 40 metres apart from each other like some giant conga yet still make a “group” almost eight kilometres long where the first and last rider get the same time. Absurd, of course because this won’t happen but also because it can happen to a lesser extent with a one second gap today: one second or three, it’s an artificial construct either way. What happens now is that this will be more flagrant. To watch a stage race already involves a certain understanding of the rules and procedures, from how the yellow jersey is awarded to synthetic time bonuses and the three kilometre rule and this new rule revision will require explanation and education. Why not go the other way? Grouping riders made sense in the past when an official at the finish line had a mechanical stopwatch. Today the technology exists to time riders precisely so why not base the overall classification on realtime? Probably because if the tech exists, the road doesn’t. This would incentivize teams with a contender for the yellow jersey to place as high as possible on a stage and so we’d see GC teams launching their sprint trains on a daily basis in order to take time, all while the sprinters are trying to win. It would make things very crowded and therefore accident prone.

Conclusion
The rule change will make the finishing straight safer but doesn’t take away the pressure among the top teams trying to pace their GC leaders into position for the final moments of a sprint stage. They will still be racing for the three kilometre banner and trying to maintain a place near the front on the run in to the finish, it’s only in the final moments that they might relax but given the pressures of the Tour which team will back off? Yes the revision is synthetic because riders are not timed based on their finishing position but this has long been the case, the difference is now that the definition of a group has changed.