Less is more. Yesterday ASO, RCS and Flanders Classics announced in concert that they would shrink the team size for their events down by one. The grand tours go from nine riders per team to eight and the major classics from eight to seven riders. The race owners say it is to improve safety and enhance the sporting spectacle.

Will it make a difference? Yes but it won’t be transformational. For safety the smaller peloton will have more room on roads which are increasingly clogged by street furniture and traffic calming. There will be fewer crashes, the arithmetic of fewer riders means fewer chances of someone sliding out on a corner or getting their rain jacket tangled in their rear wheel and wiping out. Beyond individual accidents the reduction won’t change the collective danger that much. A smaller bunch is a shorter bunch because whether there are 198 or 176 riders it is still essential to be near the front which creates the tension and fight for space. It does not follow that there will be eight crashes for every nine we had in the past.

For the sporting side the idea is smaller teams will not be able to control the race as well. Team Sky’s cycle catenaccio is highly effective for them but frustrates rivals and viewers alike who want pyrotechnic attacks rather than a high tempo procession. The move to shrink the peloton is already being labelled as “anti-Sky” but a move from nine to eight is incremental, not radical. If the rule applied to this year’s Tour then for Team Sky it would mean leaving out say, Nieve, only to still have Landa, Henao, Thomas and Poels in the front group at the foot of the final climb to tract Froome and deter rivals. It’s likely to hit smaller teams too, those with multiple ambitions in a grand tour, like top-10 on GC and a sprinter. Team Sky see their team reduced by one ninth while a squad with a GC outsider and a sprinter – like Lotto-Soudal, Orica or Katusha – may have to cut their sprint train by a quarter and perhaps they’ll feel this rule change more. 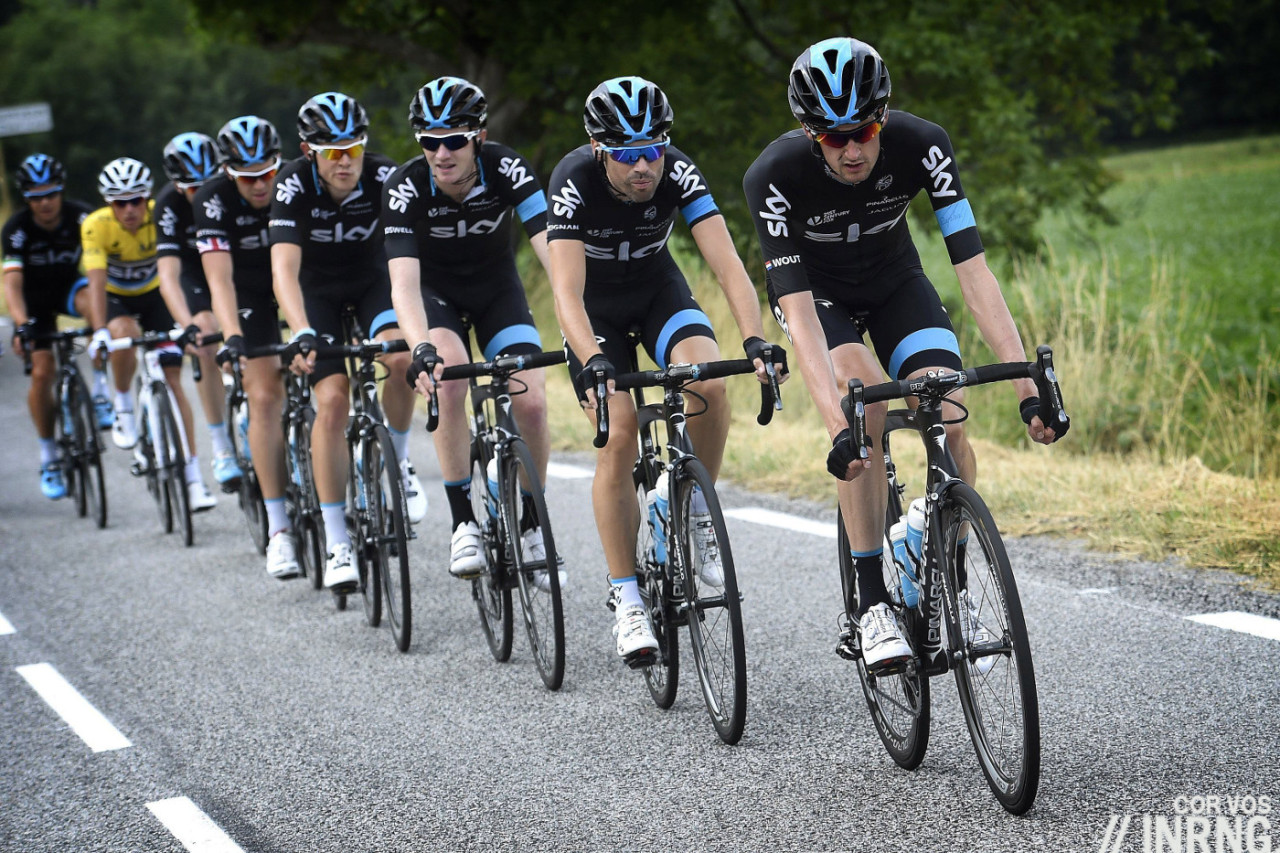 None of this is new: we’ve long had eight riders in stage races like Paris-Nice, the Tour of the Basque Country, the Tour de Suisse and the Critérium du Dauphiné (pictured). Are they more exciting? Maybe but it’s hard to measure. Team size is only one component of lively racing, another major factor is the status of the event. The Tour de France is a high stakes race where it pays to play it safe. The Politics: the story goes that when French statesman Talleyrand died the Austro-Hungarian diplomat Metternich asked “what did he mean by that?“, that an action has an agenda. Last night’s announcement was sudden. Tour de France boss Christian Prudhomme has expressed an interest in smaller team sizes again and again since taking over the role of race director in 2007, indeed voicing a preference for much smaller teams, perhaps six or seven but of late he’d been saying it would need agreement from the teams and they were not on board. The move from nine to eight on the very same day the UCI announce the World Tour teams is another indication of how the sport’s rules can be confectioned at the last moment. No sooner are the teams confirmed for 2017 than the recruitment need for the major races falls. There appears to have been neither consultation nor consent.

The UCI? The announcement came in a press release issued simultaneously by ASO, RCS and Flanders Classics rather than the sport’s governing body the UCI. You may think the UCI determines the rules and you’d normally be right but a portion of those relating to the World Tour are the preserve of the Professional Cycling Council (PCC), a joint committee between the UCI and others including the teams and race owners. To confuse things more the relevant rule isn’t very well drafted. Here’s an excerpt from the rulebook:

2.2.003 The number of starting riders per team shall be set by the organiser, with a minimum of 4 and maximum of 8, 9 for Grand Tours…

…Special provisions for UCI WorldTour
In UCI WorldTour events, the number of starting riders per team is 9 for Grand Tours and 8 for other events. However, subject to prior approval by the Professional Cycling Council, the organiser may fix the number of starting riders per team at 7. The organiser shall request the permission of the Professional Cycling Council on or before 1st January of the year of the event.

So the rule says a “maximum of 8, 9 for Grand Tours” which implies an upper limit rather than a fixed level or a minimum; but read on and there’s a special provision for World Tour races which says “9 for Grand Tours” and then goes on to say the PCC must agree if the number goes to seven. There must be arguments behind the scenes already and this could rumble on in committees and even go to arbitration but will the teams and the UCI want to provoke the big races?

The teams have a right to be frustrated. Some have gone through expensive recruitment to build teams only to find they don’t need as much. You’ve probably read several pieces from riders saying they’re planning their objectives for 2017 and will sit down with their team managers around now to discuss things. Well some riders who might have been hoping for a role in the spring classics, a start in the Giro or a berth in the Tour are now bumped onto a reserve list. What will really annoy team managers is not leaving out one rider, it’s the systemic problem of a lack of consultation, many learned of this by email or social media last night like you did rather than being involved in the decision. The tone of the joint press release is unilateral and presented as a fait accompli.

Money saving? Yes but it’s incidental. When we say a team goes from nine to eight the accompanying support staff is unlikely to shrink much and there’s all the race crew to accommodate every night to if there’s a saving on the race’s hotel bill it’s not probably not significant enough to drive the decision. Conclusion: going from nine riders to eight makes a difference but will we be able to notice it? We already have eight rider teams in other big stage races and the big budget teams dominate them too. The tactical element is incremental but the political aspect is certain as the major races unite to impose this sudden rule change leaving team managers fuming.

Update – 3pm CET: the UCI has issued a statement saying:

any changes to the regulations governing men’s professional road cycling must be agreed by the Professional Cycling Council (PCC), on which the race organisers are fully represented. This subject was discussed at the last PCC meeting in November 2016, and it was agreed to consider in detail the implications of such reduction over the coming months, with no change for 2017

This shows the gulf between all parties who are now playing press release tennis, responding to each other via public statements rather than deciding on matters together.