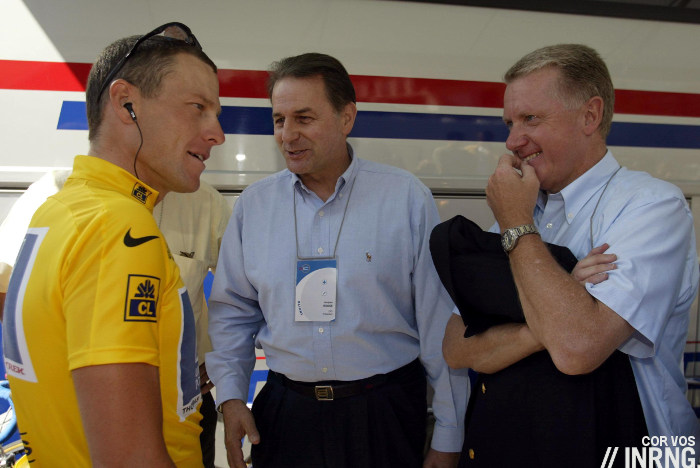 Born in 1941 Verbruggen remembered the likes of Fausto Coppi and Gino Bartali from visits to with his grandfather to criteriums in the Netherlands. Did these exhibition races with their hidden business practices leave their mark on Verbruggen? It’s tempting to see something but he was probably just a kid enjoying the show.

After graduating with a degree in marketing he started work in Belgium and five years later joined Mars, a US food multinational, and promoted a brand of powdered milk. He persuaded Mars to sponsor a cycling team and the Flandria team bore the Mars logo from 1970-71. The man from Mars found pro cycling an alien place as he told Le Monde in 2008 (translation):

I discovered a feudal world where the riders were victims, the last of the last. During the criteriums the managers decided who took part and who was going to win.

Mars stopped sponsorship but Verbruggen got started. He set up a private consultancy and worked with the Dutch cycling federation. He joined the Fédération Internationale du Cyclisme Professionnel (FICP) in 1979, then pro cycling’s governing body and in 1984 he was elected its president. A powerful role? Not at all, the FICP was a small body outside the Olympic movement and as ex-team manager Roger Legeay recounts, at one point took to meeting in the kitchen of its secretary. Verbruggen impressed others sufficiently for the Amaury family to consider appointing him as directeur of the Tour de France in the late 80s, a role he declined. He got to work on the sports admin and began to make the FICP, and himself, more powerful, establishing a ranking system and then a World Cup in 1989 including new rounds in Britain and Canada in what the French called mondialisation perhaps before the word globalization had become familiar. In no time the FICP points became the currency by which riders were ranked and paid.

By 1991 Verbruggen was elected head of the UCI, then operating out of a small office in a seedy part of Geneva, Switzerland. The following year the amateur racing governing body, the FIAC, merged with the FICP under the UCI umbrella giving Verbruggen and the UCI unified control but only over a thin rulebook. Symbolically the UCI moved to more plush headquarters in Lausanne, home to the Olympic movement. Soon after men’s pro cycling entered the Olympics in 1996, a partial consequence of uniting the governing bodies but also a reflection of the Olympic movement’s embrace of professional sport across many spheres. A decade later and Verbruggen moved to the UCI to its current headquarters in Aigle, a modern complex complete at the foot of the Alps with an in-house velodrome and a budget that had gone from six million Swiss Francs to 75 million and a workforce that went from a mere secretariat into over 100 salaried staff including the developmental World Cycling Center. By then Verbruggen had established himself over the sport and beyond, sitting as a member of the International Olympic Committee.

At the same time a blood-boosting medicine called erythropoietin (EPO) had become a pharmaceutical blockbuster and as well as benefiting chemotherapy patients its use was becoming widespread across aerobic sports. EPO was banned but for years there was no approved test. The only clues to its use were rumours, at least until police raids and border guard made vast seizures, notably the Festina affair. Verbruggen’s UCI started blood testing riders in 1997 and forcing them to rest if their haematocrit exceeded 50%, not proof of doping but a health test. Was this the UCI taking a lead or having to adopt measures to contain a problem that was out of control? Arguably both. The 50% limit was soon gamed, much like motorists slowing to pass a speed camera only to accelerate once past detection zone. But for rider health better the check than none, even if it lead to public scandal with riders and teams not able to dilute their blood quickly enough in the event of the UCI “vampires” appearing for dawn blood tests. Many riders were forced to rest, notably Marco Pantani who was ejected from the 1999 Giro d’Italia while in the race lead and two stages away from winning the race overall. Verbruggen happened to be at the Giro that day and defended the policy which only a handful of other sports dared copy.

Along came Lance Armstrong, marketing manna thanks to his nationality and the backstory of “fighting” cancer. Verbruggen helped out when Armstrong tested positive for cortisone in 1999 on his way to his first Tour de France win (since stripped by the UCI). Procedure was waived as the UCI broke its own anti-doping rules. Easier said than done to stop the yellow jersey over a procedural point in the wake of the Festina scandal that almost stopped the Tour the previous year. Verbruggen kept the show on the road and personally took to the media to defend Armstrong, clouding the topic with mentions of dosages and prescriptions rather than sticking to the dull matter of the UCI’s rulebook. The proximity between Armstrong and Verbruggen led to claims of corruption when the Texan donated money to the UCI so that the governing body could purchase a blood analysis device. Corrupt? Not proven but it looked terrible and embarrassed the UCI for years and there were more claims of overlap, for example Verbruggen had a portfolio of assets under management with Thomas Weisel Partners, a bank but also the sponsor and supporter of the US Postal team.

Verbruggen admitted in an interview in 2015 that taking the Armstrong donation was a mistake. This admission was a rarity for someone who seemed to avoid nuance or grey, at least in public. In 2001 he penned a report titled “UCI – 40 Years of Fighting Against Doping” which illustrated his certainty and defiance – complete with his hallmark use of repeated exclamation marks – but by then pro cycling had become sport’s scapegoat. The arrival of EPO and subsequent blood doping didn’t put the cheats a step ahead of the testers it put them a hop, skip and jump ahead. There was simply no way to catch them via the usual toxicology tests for banned substances. Instead criminology caught more, such as in Operation Puerto. 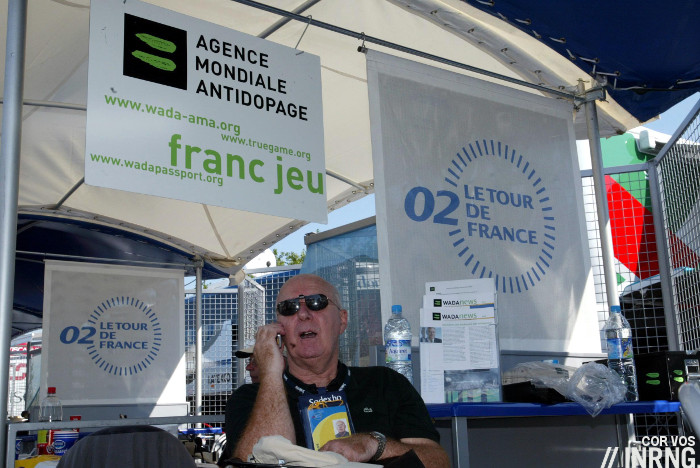 Verbruggen worked closely with fellow Dutch-speakers Lon Schattenberg (pictured) and lawyer Philippe Verbiest. The UCI’s Cycling Independent Reform Commission (CIRC) published its report in 2015 and painted a picture of Schattenberg working to prevent doping scandals… by ensuring nobody got caught. When Armstrong’s samples were suspicious in 2002, the CIRC writes Schattenberg questioned the test rather than the rider. He wrote to teams in 2002 to tip them off over the EPO test:

“…even though it was announced that the urine test could only detect EPO in the 3-4 days after it was first taken, the laboratories have noted that in certain cases, it can even be detected one week later!!“

The World Anti-Doping Agency had its genesis in the wake of the Festina scandal and Verbruggen’s was a key IOC insider but far from leading the fight the UCI was dragging its heels as one of the last sports to adopt the WADA Code, signing in 2004 just in time to avoid cycling’s exclusion from the Athens Olympics. Verbruggen continued to be at loggerheads with WADA and its President Dick Pound, for example over the Vrijman Report which cleared Armstrong of suspicion of EPO use during the 1999 Tour de France.

In 2004 the UCI Pro Tour was launched, the forerunner to the World Tour today. Building on the World Cup Verbruggen had promoted at the end of the 1980s, the Pro Tour offered guaranteed starts to member teams in the big races in return for their commitment to participate in every event in the UCI’s Pro Tour. Comparisons were drawn to Formula 1 which were surely excessive, albeit illustrative of a single premium calendar with defined participant; it certainly reflected the efforts of a President with a business and marketing background and a future in power-broking. The plan created a more coherent calendar but also gave the UCI more power because it could determine who rode the Tour de France rather than ASO, the Tour’s owners. The UCI and ASO went into a cold war and ASO won, just. Things came to a head in 2008 when the UCI tried to forbid teams from riding ASO’s Paris-Nice event but teams did not not want displease ASO for fear of not being invited to the Tour so the UCI’s authority cracked, resulting in the stand-off that persists today between the UCI, the teams and ASO. By this time Verbruggen had handed over the Presidency to his desired successor Pat McQuaid in 2005 but did not relinquish his role, keeping a title of Vice-President and his own office in Aigle. The CIRC report even stated emails sent to McQuaid could receive a reply from Verbruggen.

Verbruggen worked more on his role within the IOC and the Olympic movement stipulated he give up his job at the UCI. He did and forged close links with the Chinese government ahead of the 2008 Olympics in Beijing and this led to the ill-fated Tour of Beijing race. There was even talk he helped sink Paris’s chances of hosting the Olympics that year, in part after a battle to stop French law applying to the Olympics, the subtext being that the Olympics could face its Festina moment if it wasn’t in charge of the anti-doping rules. A true story or sour grapes from a French minister on a losing bid? In some ways it doesn’t matter, the mere possibility that Verbruggen could do this made enhanced the image of a power-broker who could pull strings. He’d come a long way from those kitchen meetings of the FICP.