Should the UCI have Disqualified Armstrong in 1999?

Le Monde made some serious allegations against the UCI yesterday. The French newspaper accuses cycling’s governing body of “covering for Lance Armstrong” and even alleges that they accepted a “falsified document” to help Armstrong escape a doping ban in 1999.

Some these tales have been doing the rounds before but paper published the documents relating to the controls in July 1999. Now a backdated and falsified document is a very serious charge. But I can reveal another document from 1999 that should have seen Armstrong ejected from the Tour de France: the UCI rulebook.

Background
Let’s tell the story again. Back in 1999 corticosteroids were allowed for therapeutic reasons when applied locally, for example a rider could apply a cortisone cream to a saddle sore. But its abuse is banned, for example injecting corticosteroids into muscle tissue to relieve sore legs is doping. In order to accommodate the ambiguity the UCI rules in 1999 stated a rider had to declare whether they were using any substances on the anti-doping paperwork that was signed during the test procedure, for example “yes, I have a saddle sore and have taken Product XYZ” so  if the molecule showed up in the lab sample it could be explained for medical reasons.

This led to a grey area. One notorious French rider would rub rock salt into his scrotum – no kidding – until it was red and visit a doctor complaining of soreness from chafing shorts and so he could obtain a cortisone cream by prescription. Equipped with permission to use cortisone a cheating cyclist could then abuse it by injection and waive their prescription back at the anti-doping testers.

Armstrong 1999
In 1999 Lance Armstrong underwent several anti-doping controls and it emerged that he tested positive for cortisone four times during the race. Le Monde went to town during the race with this but the UCI fired back stating there was no concern as this was a case of therapeutic use and a prescription was presented. Here’s an excerpt of their press release:

Information on UCI anti-doping controls is based on two principles:

We confirm that the controls performed up to 19th July during the Tour de France have all produced negative results.

Without prejudice to the medical secrecy which the UCI fully wishes to maintain, but at the express request of Lance Armstrong and his team, taking into account the exceptional situation brought about by certain publications, the UCI is making an exception to this principle by confirming that:

the rider used the ointment Cemalyt (which contains triamcinolone) to treat a skin allergy.

The medical prescription has been shown to the UCI… … the UCI, after discussing the case with the competent French authorities, affirms in the strongest terms that such use is permitted by the rules, and therefore does not constitute any form of doping.

Only Le Monde has shown us the paperwork from the anti-doping control signed in triplicate by a doctor running the test, an anti-doping officer and Armstrong’s team manager Johan Bruyneel. And on médicaments pris (medicines taken) line is the handwritten néant or “nothing.” Therefore the testers were told there was no therapeutic use of cortisone.

Which brings us to the UCI’s rulebook. Here’s Article 43 from the UCI’s 1999 rulebook: 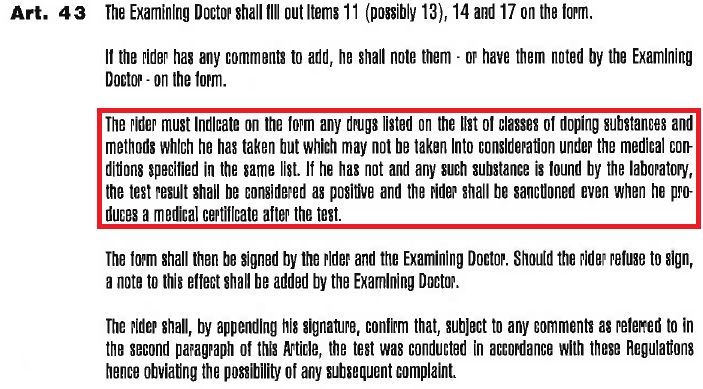 Oprah and Le Monde’s conspiracies
The UCI stated in its press release that “the medical prescription has been shown to the UCI” but we now know this was backdated. Here’s an excerpt of the transcript from the Oprah Winfrey interview with Armstrong:

Winfrey: “What about the story [masseuse] Emma O’Reilly tells about cortisone and you having cortisone backdated – is that true?”
Armstrong: “That was true.”

It’s not clear if the UCI was complicit in this and knew the prescription was created ex post to justify the positive test. Le Monde seems to say this, writing “L’UCI a protégé le coureur en acceptant ce document falsifié” which translates as “the UCI protected the rider [Armstrong] by accepting this falsified paperwork.”

So what happened?
Only let’s forget Le Monde’s conspiracy allegations for a moment and look at the rules in black and white there. If the signed form read néant for declared medicines then the rules are clear, the rider is suspended.

I’m not the first to point this out. When this came out in 1999 Armstrong said he didn’t put a note on the paperwork because he didn’t think a cream was a medical product only the press pointed out Article 43 within days. More recently the story has been doing the rounds, for example, Gerard Vroomen blogged about this last October. But in the light of Le Monde’s allegations I wanted to dig up the rulebook to see for myself.

This caused a big stir in 1999 – we’re talking about the yellow jersey in a doping scandal –  and later the UCI explained events in greater detail in another press release. Here the UCI stated that the quantities found were small and therefore, in conjunction with the French sports ministry, that was “enough proof to suggest that the substance was administered in a non-prohibited method” stating that if the product was being injected then the Armstrong would have tested positive for several days in a row. Instead he tested positive four times over several days with some clean days in between. Only if the helpful hypothesis advanced by the UCI can explain things, the rulebook didn’t allow for debate over dosage, there was no threshold and the failure to declare the medicine meant Armstrong would be disqualified from the Tour de France and get a suspension for six months to one year.

Go back in time
We have a rider in yellow and a positive test thanks to a paperwork blunder. Be generous and imagine that Johan Bruyneel signed the form without knowing Armstrong had been given a saddle sore cream by a team soigneur. It’s 1999 and one year ago the Festina affair had almost stopped the Tour de France. Could the sport risk ejecting a rider from the race? All because someone messed up the paperwork? This would take the sport from tragedy to farce.

To get a feel for what it was like in 1999, read the Independent newspaper which explains how Armstrong won the race and “had to counter a spiteful media campaign” along the way. Armstrong won the day with the media but obviously now revealed to Oprah that things were fixed.

Inexcusable leniency or sensible pragmatism?
Is this inexcusable, did the UCI go easy on Armstrong? Or maybe leniency was tolerated back in those days? Maybe it was a sensible decision not to bust him because of a paperwork blunder? Judged against today’s standards something went wrong but 1999 was a very different place.

However what concerns me is that the press releases issued by the UCI and quoted above never cleared up the matter, for example debating the dosage whilst ignoring Article 43 or saying a prescription was supplied whilst again Article 43 says a prescription’s irrelevant. They have a story but didn’t explain why the UCI seemed to ignore its own rules. It’s as if a rider is being excused from the rules only there’s no provision for this.

Conclusion
Le Monde have made serious allegations against the UCI it’s conduct in the past. This is no cheap tabloid, it’s France’s establishment newspaper and we’ll see if the UCI is moved to deny the allegations, after all they were quick to claim vindication following the Oprah Winfrey interview despite the admission of a backdated prescription during the show. Perhaps they will sue the newspaper?

But tales of fake documents and conspiracy theories are one thing. The published rulebook is another. Le Monde doesn’t even need to talk about faked documents when the UCI’s own rulebook said at the time Armstrong should been stopped.

With today’s hindsight many will say the UCI should have acted all those years ago, after all what good is a governing body that can’t apply its own rules? Yet things were so very different in 1999. Most of the media at the time seemed to buy into the dosage hypothesis, hypnotised by Armstrong’s press conference chutzpah and the last thing the sport, including the UCI, needed was yet more scandal. There were cautionary voices but they were ignored.

If you were running the UCI what would you have done?