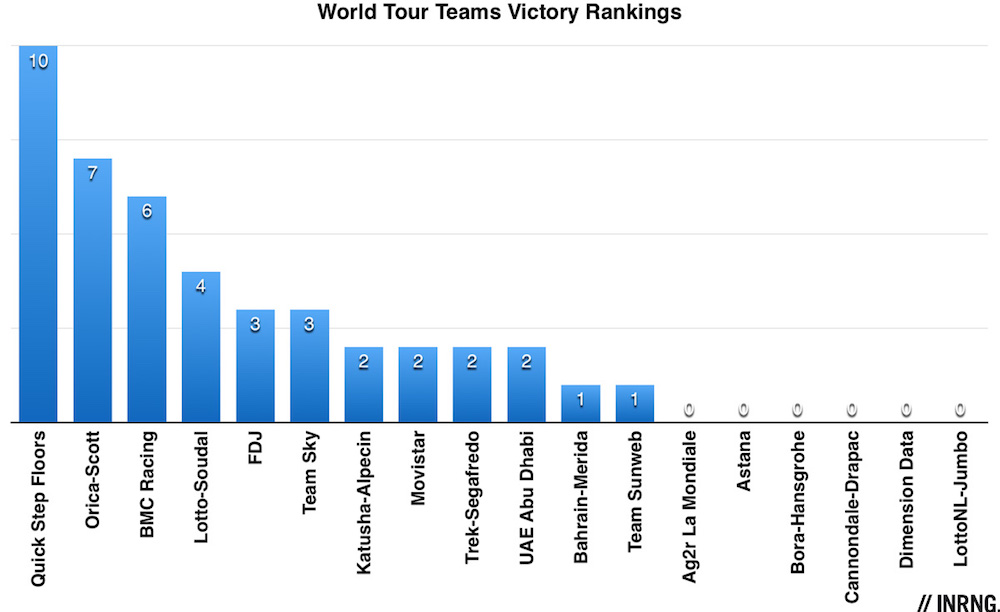 The season’s barely begun, right? Technically we’re already one sixth of the way through the 2017 season and with a pause this week given the vanishing of the Tour of Qatar and the Tour Méditerranéen it’s a good moment to take a look at the standings so far. Quick Step step quickly to the top of the table with 10 wins from five riders. Over the years the team consistently won races with many of their riders, last year 18 of their 30 riders took individual wins, ie excluding team time trials. The Belgian team is off to a lucky start this year too in terms of podium distribution with 10 wins and only one second place and one third place.

Orica-Scott are on seven after enjoying Australia’s “summer of cycling” thanks to Caleb Ewan’s four stage wins in the Tour Down Under and two from Damien Howson in the recent Herald Sun Tour, a good win for a rider who has until quietly impressed as a mountain domestique. Magnus Cort Nielsen’s picked a win in Spain already, carrying on from his Vuelta stage wins last year.

BMC Racing are third thanks to a double at the Australian nationals where Rohan Dennis and Miles Scotson won titles and then Richie Porte’s two stage wins and the overall classification in the Tour Down Under add to the tally. Porte is looking like a contender for the podium in the Tour de France but his triumph Down Under isn’t behind this, instead it’s his record in races like the Tour itself and regular wins in Paris-Nice that earn him podium contender status.

Lotto-Soudal have enjoyed a nice start to the season with two wins in Majorca and Tony Gallopin took a time trial win in yesterday’s final stage of the Etoile de Bessèges, his first in a time trial and perhaps a sign of the raw power he’ll need as he switches his focus towards the cobbled classics this year when in recent years he took aim at the Ardennes races. Tim Wellens took two wins thanks to his explosive, daring ways and aided by team tactics with his squad able to mark out rivals.

Among the others FDJ and Team Sky are tied on three wins but different stories as FDJ have seen two of their three leaders win in Arthur Vichot and Arnaud Démare while Team Sky have seen three domestiques enjoy a rare win, even if Luke Rowe and Ian Stannard are classics contenders in the spring too. Trek-Segafredo have two wins, a pleasing sprint win for Degenkolb to show his recovery from that training crash a year ago and an intriguing win for Bauke Mollema in the Vuelta San Juan. The Argentine race had a bantamweight start list but it was the manner of Mollema’s win that impressed, he almost won the time trial stage and it’ll be interesting to see how he fares this year given he’s notionally second fiddle to Alberto Contador. The chart includes the teams without a win if only to remind us of all 18 teams in the World Tour. Lotto-Jumbo are all in behind Dylan Groenewegen for wins and they’re bound to get off the mark with the 23 year old Dutch champion who has beaten the likes of Marcel Kittel and André Greipel in straight sprints. Bora-Hansgrohe are waiting for that first win, Sam Bennett came close already in Australia but all eyes are on Peter Sagan. Remember that until he won Gent-Wevelgem last year the story was all about how the Slovak simply couldn’t win a race rather than the nonchalant ease he went on to display for most of the year. Dimension Data were almost relegated last year but won’t suffer on the victory rankings with a sprinter like Mark Cavendish. Astana have lost their sprinter Andrea Guardini but recruited neo-pro Riccardo Minali who has yet to win but has started well and if the name is familiar to some, it’s because his father was a prolific winner in the 1990s.

Ag2r La Mondiale and Cannondale-Drapac are the two that might need more time. The French team doesn’t have a house sprinter and Nico Denz’s mountains jersey from the Etoile de Bessèges doesn’t count as a win but they’ve had two podium places already. The US team has a sprinter in Wouter Wippert but he hasn’t won since June 2015 and the team has yet to have a top-three finish. 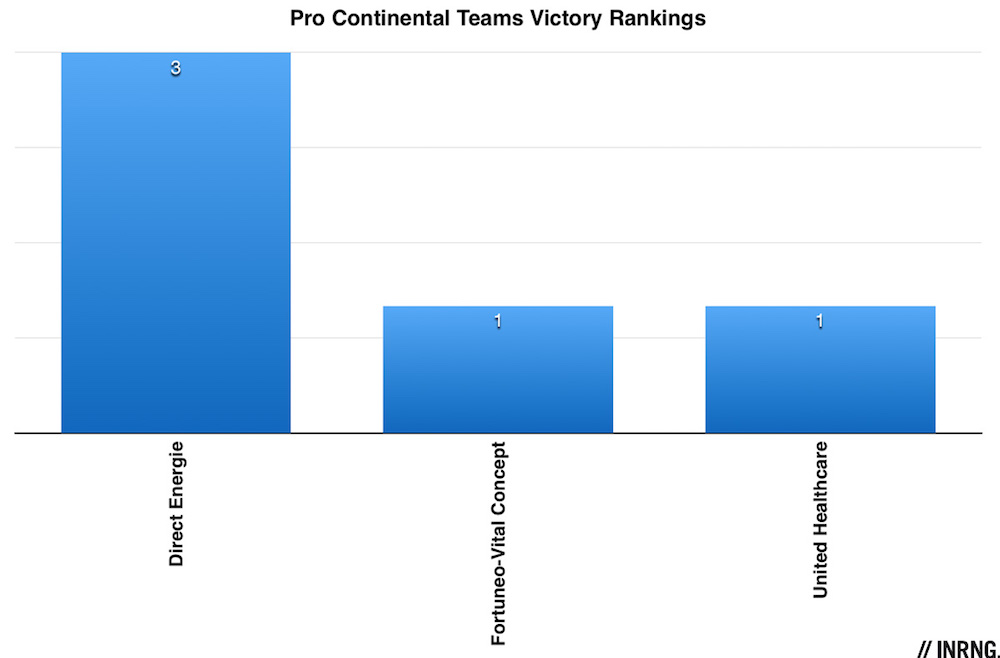 We might be some way through the season but there are slim pickings for the second tier of teams who have just three wins between them, an obvious sign of the dominance of World Tour teams. Direct Energie took two wins yesterday to propel to the top of the chart thanks to Lilian Calmejane and Bryan Coquard. Fortuneo-Vital Concept have a win thanks to Dan McLay and United Healthcare scored in the Herald Sun Tour with sprinter Travis McCabe. In each case having a sprinter on the roster is good for the wins. But absent from the list so far are Cofidis where Nacer Bouhanni has two second places and a third. Does a winning start bring success for the rest of the year? There’s the hypothesis that a successful start to the year allows teams to look ahead to the rest of the season with confidence, that success breeds success and those teams struggling begin to get nervous and risk being stuck in a rut. This blog’s done the maths and the correlation between early wins and success over the whole season seems weak but it’ll be worth revisiting the topic again soon with fresh data from 2016 because at first glance last year seemed to suggest a good start did help.

Team victory rankings methodology: all World Tour, HC and *.1 races count as well as national championships. A win is a victory in a one day race, a stage victory or the overall classification in race. Annex competitions like best young rider, the points prize or a mountains jersey don’t count.

Technically we are one sixth of the way through the season, there have been 67 days of racing so far out of a calendar of 435 days of racing. But this is because the UCI starts the new season the day after its annual “gala” held in mid-October last year. So any race taking place after this awards ceremony is formerly part of the 2017 season (UCI rule 2.1.001 in case you need to know). However the rankings displayed on this site are for the calendar year because this is when each team is formed: there’s no point having a set of rankings for teams that have changed composition along the way. This points to the continual absurdity of a season that is defined in opposition to the registration of teams and rider contracts.