Outside is Free (For Now) One of cycling’s greatest attractions is the popular communion on a Sunday between the peloton and the spectators. A race goes to the people, it passes your front door and the local café, school, supermarket and church. No other sport can reach these places in the same way.

Now a survey of Belgian races has raised the prospect of charging for access to bike races and the idea of getting ticket revenue from roadside spectators. Outrageous? Not really. It’s been done before and happens already but it would mark a cultural and economic change if it spreads further. With this in mind it’s worth exploring further.

First this isn’t new. Races have long charged spectators, indeed one reason Paris-Roubaix begun in 1896 was a ruse to fill up a new stadium with fee-payers. Many races used a velodrome or even an athletics track in ensure a captive audience paying tickets and people were only to happy to buy in. Because there was no TV this was the way to see the “giants of the road” up close.

Today some of the post-Tour criteriums do it and several pro races in Belgium do too. The Tour of Flanders has the giant VIP zones on the Paterberg and Oude Kwaremont within those white tents and lowlier events like the Nokere Koerse and Belgian national championships close off part of the circuit and charge for access. It’s not just that it can be done, it is done. 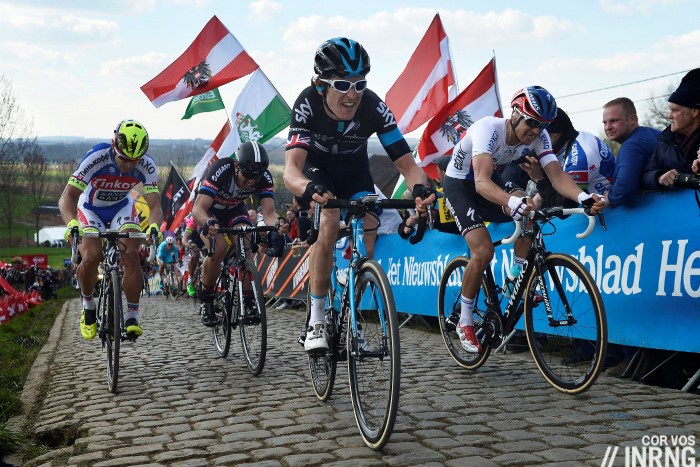 Spot the white VIP tent in the background on the left?

So the next question is whether this will happen more? The arguments are obvious when set against the sports constant refrain: a lack of money in the sport. Marketing literature from the Tour of Flanders claims there are 600-800,000 people roadside and if you could tap them all for two Euros then you’ve got a nice earner. Only the likes of Flanders Classics, owner of the Tour of Flanders, tells Belgian newspaper Het Nieuwsblad it doesn’t want to go down this route. Instead the newspaper raises the plight of races with shakier finances and suggests they’re the ones in need of new income. This is a taller order, for example this week it sounds like the season-ending race in Belgium, the Nationale Sluitingsprijs, could be back on after initially announced as finished and it’s this kind of race that needs a boost but it’s a hard sell. How much would you pay to stand here for three hours?

This brings us to the existential question of whether it’d be worth paying for. Frankly standing beside a road waiting for a race to speed past at 45km/h is not always the best of experiences and having to pay would force people to confront this. One solution is to offer something in return for the money: catering, toilets, wifi and large screen TVs within your line of sight so you don’t miss a thing. Pricing what has been free may not happen in isolation. Others could quickly get €-signs in their eyes. Nowadays a lot of bike races happen precisely because people are not out to charge everyone the going rate, for example the police don’t charge at all, or if they do they attend then they bill a subsidised rate. Right now a local mayor or regional politician might take pride in hosting a race but tomorrow they could demand a day’s rent for the private space or even bill the race for litter collection. In no time at all a bike race goes from the public space to the private sphere. It happens already, the Heuvelland municipality tries to tax races for climbing the Kemmelberg and ASO changed the route of the Flèche Wallonne to detour a town called Ham rather than get taken for jambons by the mayor who demanded payment for use of the roads. Another issue is who gains? If it’s just to expand the profit margin for event promoters then it’s bound to annoy some. But if it’s to keep a race going it might be more tolerable. Remember this is Belgium we’re talking about and having a bike race on your doorstep is practically a birthright. No joke: the locals of Geraardsbergen protested when the Muur was dropped from De Ronde. Similarly pro cycling is deemed so central to public life that it’s enshrined in law that many bike races that have to be shown free-to-air in Belgium, as opposed to subscription or pay-per-view broadcasters. The cast of extras

Let’s go beyond Belgium, what if the huge crowds on a summit finish could be tapped for cash? Imagine ticketing Alpe d’Huez or Mont Ventoux? A bonanza perhaps but once again this would bolster the wealthy races that don’t need the money while the smaller races struggle. Also to reprise the notion of a bike race as an event in the public sphere, races like the Tour de France hold a place in French cultural life precisely because they’re popular, they’re socio-cultural rather than mere sports-business events. Instead the money is in the adage that “if you’re not paying for the product then you are the product” and all the millions who stand beside the road enrich the race. Literally because their presence enables the publicity caravan and metaphorically because the roaring crowd – minus a few morons looking to get in the way – ennobles the event. Even the spectators sport branded hats

Proof of the “you’re the product” concept is the publicity caravan. The Tour de France has a huge one and it’s both lucrative and effective, a massive money-spinner for race owners ASO and multinationals participants like Nestlé and Mondelez attribute double-digit sales growth to participation. As well as being very receptive to the messages by the time it’s passed through, tens of thousands of people are dressed in the sponsor’s gear. Flanders Classics owns the Omloop Het Nieuwsblad, Dwars Door Vlaanderen, Gent-Wevelgem, the Ronde van Vlaanderen, the Scheldeprijs and the Brabantse Pijl so there’s possibly an avenue to explore here but again it’s a case of the best races being able to earn more. Meanwhile a lesser event struggles, it just won’t have a valuable proposition for a corporate caravan, let alone the marketing department to coordinate this. Conclusion
As things stand the big races don’t need to charge and the smaller ones would struggle to get away with it. A few races already charge money and if more want to try then why not? The irony is that the sport has become more free to watch these days, you can even walk into the Roubaix velodrome without paying.

Ticketing could become a thing but it’d be a cultural shock if done in established places, perhaps it’d be easier for Brits to pay up than Belgians? Proponents may need to beware of unintended consequences, especially if the police and local government respond by trying to charge for road closures and more. It’s risky act of pricing something that has always been free because it prompts a monetary cost-benefit analysis that wasn’t there before. The holy grail, or at least the golden fleece, would be to make a Tour de France summit finish ticket-only but you wonder if this simply becomes a boon for fencing suppliers and private security guards and if fans have to buy tickets then mayors will ask for money, the police will want to paid the going rate and in no time the race is uneconomical. What could work instead is a “fan zone” where there are big TVs and other facilities to help pass the time, a zone people can enter.

Photo credits: main image by Thomas Sweertvaeger and men sitting outside a house by Gert Verbelen from the Belgian book “Supporters Leven Voor de Koers” which documents the crowd at bike races, via the publisher’s media pack