A tricky time trial with some fast moments and some surprisingly steep sections making harder than a classic mountain time trial. How much will Chris Froome extend his lead by today? 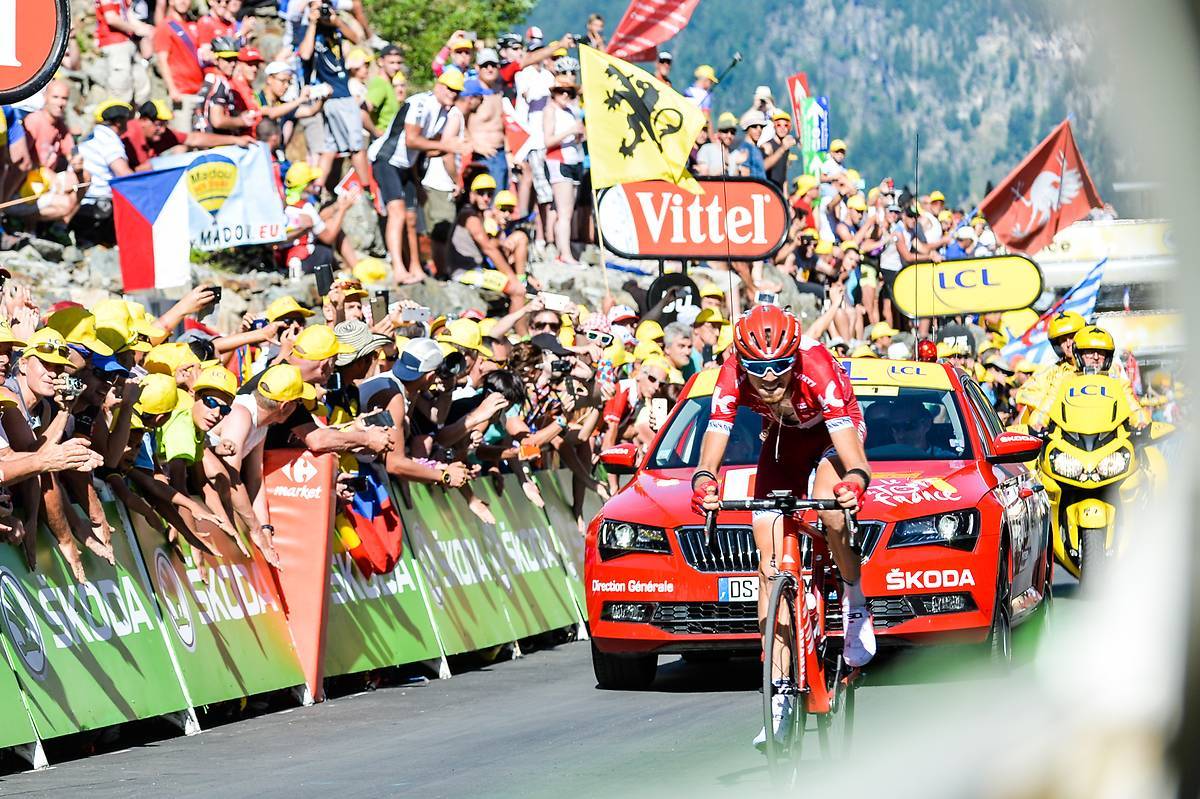 Stage 17 Wrap: ideally the stage would have got a separate write-up yesterday evening but it wasn’t significant enough. Not that nothing happened, the breakaway took a long time to form as they did 51.8km in the first hour but finally a 14 rider move went with the two breakaway picks of Rafał Majka and Ilnur Zakarin among them. Others gave chase but Peter Sagan was in the move too and got work on behalf of Majka to keep them at bay.

Over the top of the penultimate climb Majka jumped away with Jarlinson Pantano and the two started the final climb to the Emosson dam together with Ilnur Zakarin quickly bridging across soon afrer. On paper it looked like a contest between Majka and Zakarin as the two best climbers but the Pole seemed fried by the heat and so it was a battle between Zakarin and Pantano and the Katusha rider cracked his rival. He might have gone solo for the win but it seems Zakarin cannot escape a positive doping test from 2009, he is one of the five riders in the race to have a past doping suspension hanging over them.

Behind the GC battle was another exercise in suffocation. Let’s not confuse this with a parade, it’s not that nobody would attack it’s that nobody could. Dan Martin tried, did a boomerang and it was only in the final kilometre that the top riders were split apart with Richie Porte proving the strongest and so far keeping the “he can’t do a grand tour” maxim at bay. Alejandro Valverde slipped two places to seventh overall while Tejay van Garderen was the big loser of the day, not just falling out of the top-10 but coming in 18 minutes down after cracking on the Forclaz. Once again Wout Poels was instrumental in locking down the race. Chris Froome is in a commanding position but isn’t running away with the race, he only put eight seconds into Adam Yates and 11 into Romain Bardet but in these small margins there’s still a gulf. The Route: a 17km uphill time trial with 765 metres of vertical gain. The course is in five parts: The Contenders: it’s hard to see past Chris Froome to the point of wondering how great the margin of his victory will be. He was second in the Ardèche time trial stage last week and is obviously climbing well. His only problem today is having to cope without Sherpa Poels.

Richie Porte is the momentum pick, he’s on the up and as long as he can pace himself better than last week should set a big time. He was climbing better than Froome yesterday or as least looking more explosive in the final moments until Froome spun his way across.

Can Tom Dumoulin win? Normally this is not a course for him, if it looks rolling on the profile the reality explained above should make it too hard for him. To his advantage though he came in 30 minutes down yesterday meaning a relative rest. Still it’s likely the steep parts take their toll compared to the likes of Froome and Porte.

Bauke Mollema gets a chainring today. I got some flak for not giving him one yesterday but if a top-5 place seemed within reach on the stage the win seemed out of the question. However today he can ride at his own tempo rather than respond to attacks and his ability to suffer could see him haul himself to a result.

The local pick is IAM Cycling’s Jérôme Coppel, strong in the Ardèche time trial and able to climb well in conditions like this, a top-5 is possible.

Weather: the chance of rain early on but dry for the later starts. It’ll be a hot 32°C at the start in Sallanches and humid 25°C higher up at the finish in Megève. There will be a southerly wind meaning a headwind in places but much of the course is sheltered.

TV: riders off in reverse GC order with Sam Bennett at 10.51am CET and the full list of riders and times can be found here.

TV coverage starts at 2.00pm CET and Chris Froome is forecast to arrive in Megève at 5.30pm Euro time. 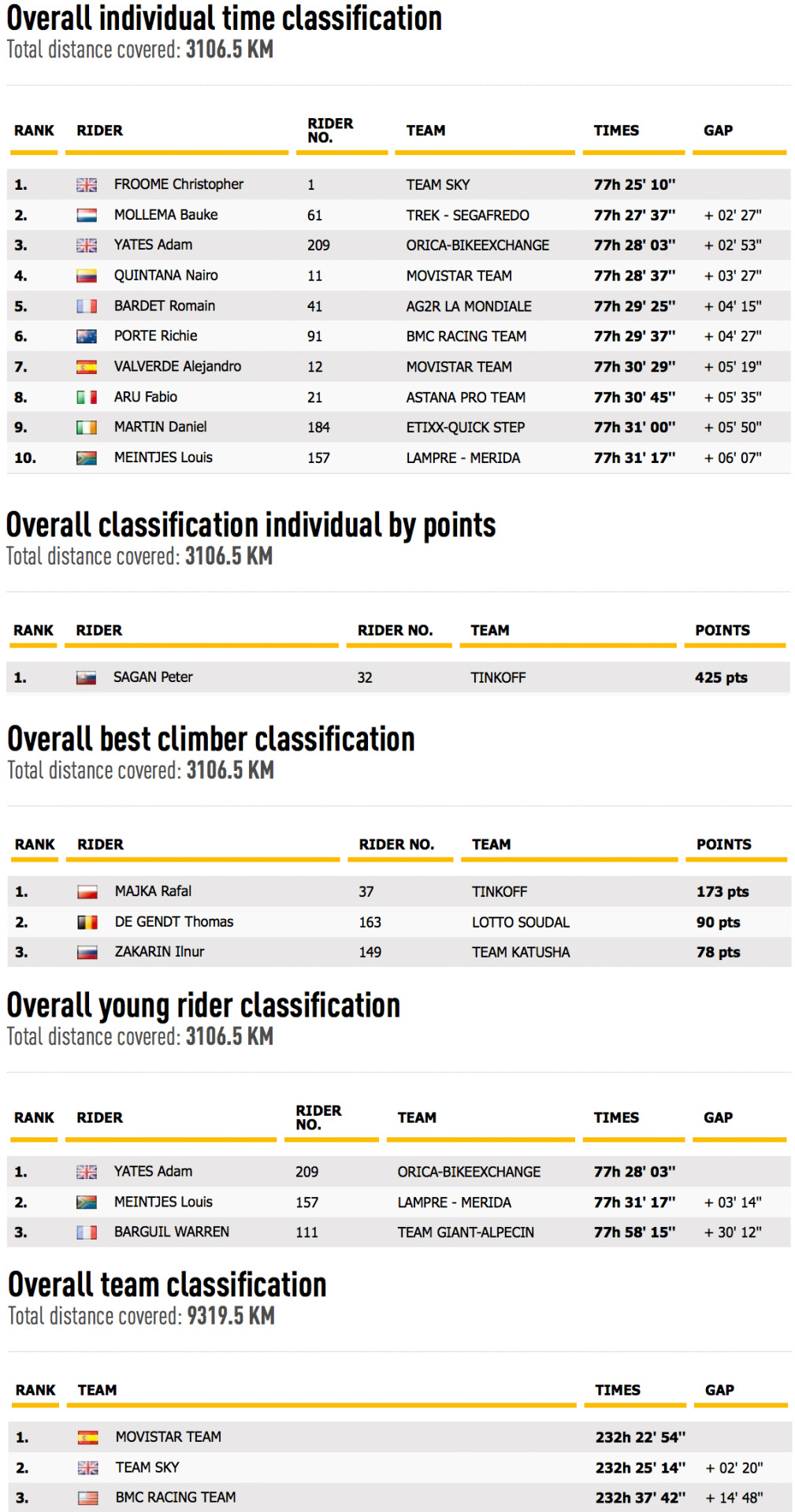 Next post: A Day On The Side of The Road