A Day On The Side of The Road Watching the Tour de France on TV? It’s only one way to see the race. Every year an estimated 12 million people line the roads and a day beside road reveals plenty about the event.

D-20: The Tour is a travelling Keynesian public works programme. Kilometres of the route are relaid with fresh blacktop to the point where you wonder if the peloton thinks France smells of tar in the same way the Queen probably thinks Britain smells of fresh paint. Other roads get repaired but the Tour seems to get priority, as if mayors and prefects are worried about comments on the poor state of the roads in their area during live TV. D-1: Before the race comes through the roads are prepared. Roadsweepers are busy the days before and municipal workers are out preparing the course, filling in potholes and attaching hay bales for safety in certain places.

10.30am: Come the day of the race and what first stands out is the experience and wisdom of many. There’s what the sociologist Pierre Bourdieu calls cultural capital as many beside the road come prepared thanks to years of experience. The passage of the Tour de France is an intergenerational rite as grandparents, parents and children line the road and the elders have it all worked out. A novice might bringing a camera and a bottle of water, the French family arrives with cooler boxes, chairs, a folding table and an umbrella for shade as well as games and books for the children.

The roads are closed by police from the morning onwards. Every side road coming onto the course has gendarme in their blue uniform. This means a lot of gendarmes. Do burglars and villains exploit this?

11.00am: Those painted names you see on the road are not as simple as they look. Some Britons emerge with roller brush and tray full of paint and set to work in front of the idle crowds, something to watch before the race arrives. They paint a giant F on the road while pre-race Tour traffic comes past. They paint a giant R on the road as they try to steer oncoming vehicles around the wet paint which is drying quickly in the sun. They draw two large Os and then an M. Only by now they’ve reached the edge of the road leaving a giant FROOM as they hurriedly painted a compressed E in what was left of the road. This was all the more heroic given the price of paint in France, typically €15 a litre on the Castorama website meaning a pot needed to paint the ubiquitous ALLEZ ROMAIN probably represents a €10-30 outlay depending on its size. 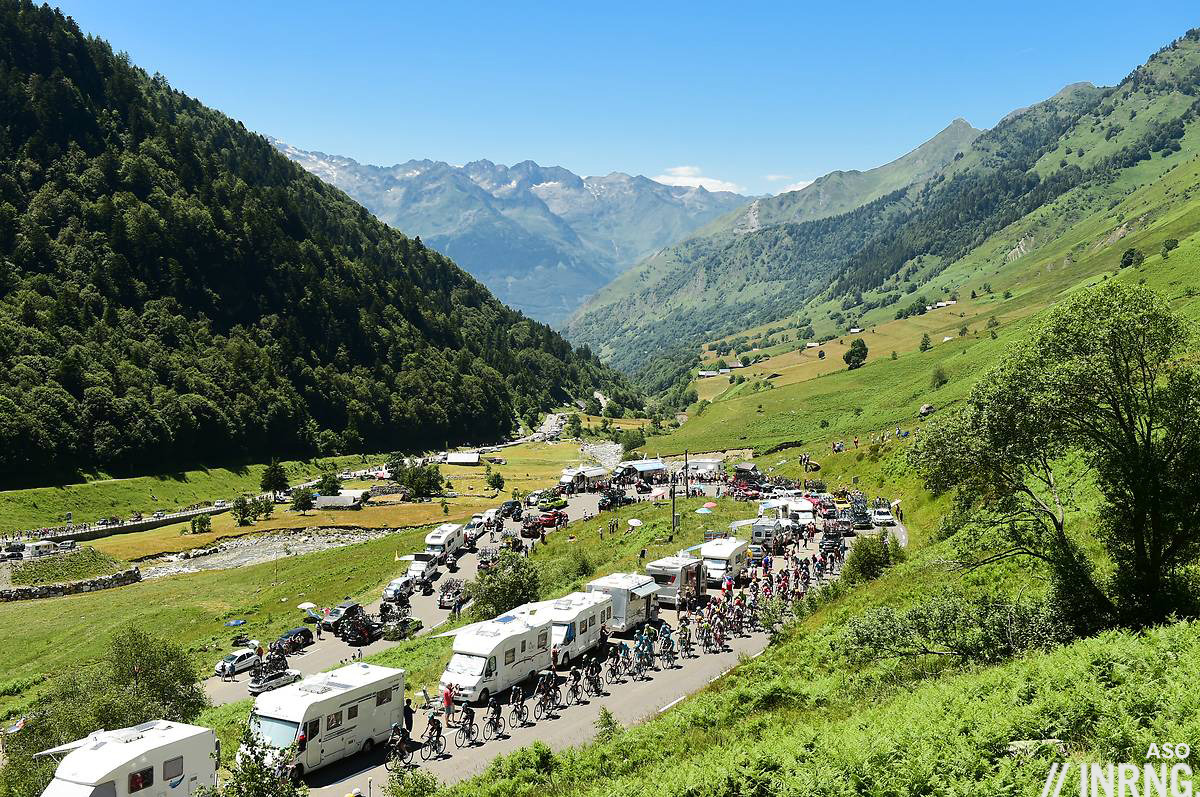 Midday: The camping cars are a feature of the race but they attract little attention from the TV cameras. Many are draped in flags, anecdotally there are a lot of Norwegians and Czech supporters by the road as well as many Belgians, Brits and Germans. Shirtless Norwegians sit in the shade as if the 21°C heat is sweltering. Most camper vans come from France and judging by the vehicle number plates from the flat north and west regions. Yet they seem homogeneous and interchangeable, invariably a married couple in their 60s. He’s not necessarily a cyclist. She’s got a book of crossword puzzles. A bottle of rosé sits on the table ready to be shared with fellow campers. France smells of barbecue. Better still is all the decoration along the way. The TV can only pick up the big things, notably the farmers with their staged displays in the field. All that’s designed for television to the point where the farmers’ union phones in the GPS coordinates to the television producer so that the helicopters can pick them up. All that’s invisible for the roadside. Instead you notice the smaller decorations, yellow painted bikes hoisted on walls, polka dot flower beds, small “Vive Le Tour” signs in people’s windows, a lot of this is invisible to TV but tells of the anticipation in villages. The Tour is the biggest thing to happen all year. 12.30pm: The publicity caravan is a hit with the crowds, especially the vehicles and staff that interact with the people. It’s an incongruous sight as giant vehicles roll past and their bass-heavy soundtracks rumble nearby farm buildings. It’s as if Times Square was dismantled, put onto trucks and driven through rural France. It’s nakedly commercial and the people love it. You might think the French are cautious about capitalism but watch as people dive into ditches to recover a keyring or pry apart stinging nettles to fish out a temporary tattoo of a corporate logo. Most often the caravan workers aim their goodies at the people. A packed of Haribo sweets here, a hat there and a bunch of key rings. 14 million items in total. It’s junk, collected in the cold light of day it’s underwhelming but the crowd goes wild. It’s astonishing as people fight to get a free product sample from a multinational and don the green caps of Skoda or the yellow hats of LCL seconds after catching them. Unloved companies like Monsanto, Goldman Sachs or Halliburton should take note. There’s politics in the caravan as the trade unions and the French employers federation take part.

1.30pm: It’s noticeable there’s a small exodus once caravan has passed. The actual race might be due but a few people simply are not interested, they came to see the weird vehicles and collect freebies. Among those that remain there’s an indifference. Many aren’t following the race too closely and just want to see the maillot jaune without necessarily knowing who is wearing the jersey let alone how they came to lead the classification. Few are listening to radios or checking their phones for the latest info on the race.

2.00pm: There’s a lull after the caravan as race vehicles pass, a mix of soigneurs driving to the feed zone and the media keen to drive the course. Cars come past blaring messages warning people to stand back and telling parents to hold onto their children.

2.44pm: The police bikes appear and the helicopters signal the race is close. The red Skoda car appears and the riders flash by. It brings to mind the quote from the film Amélie, “luck is like the Tour de France, you wait a long time for it and then it rushes by“, the cultural expression anchored in French minds is apt. The race is fleeting and there’s barely time to spot the riders. There’s Froome in yellow and his angular elbows. Thomas De Gendt. André Greipel looks pale. They’re gone.

The parade of team cars drives by with a few riders in the mix, are they dropped or fetching supplies? Finally the broom wagon comes past, today without a broom on top and most likely empty too. There are few abandons these days and when riders quit the usually use a team car. The broom instead belongs to the municipal workers who come along to clear up the debris left by the crowds.

2.47pm: Time to pack up. Those with camper vans or the full set of chairs and tables don’t seem in a rush to move on. All told it’s a grand picnic by the road interrupted by some wacky publicity vehicles and the fleeting chance to see the cyclists flash by. The race is made so much bigger by the crowds with their presence, vibrancy and noise yet the crowds hardly see any of the racing.