A stage to Montpellier, almost a copy of a stage from 2011 won by Mark Cavendish. A sprint finish is likely and crosswinds are forecast again. 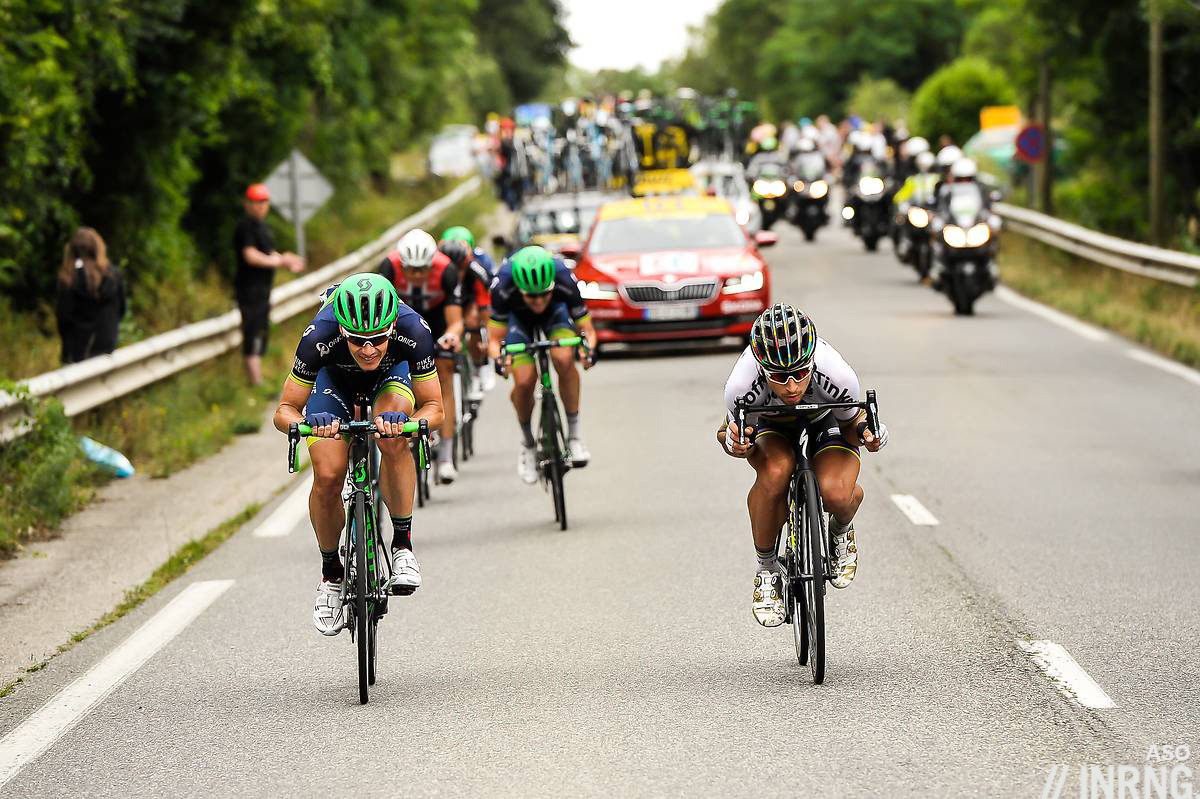 Stage 10 Wrap: a flurry of attacks on the way out of Andorra and the move only went on the descent. Peter Sagan dragged Samuel Dumoulin clear and a chase group of heavy hitters came across, most of whom had already won a stage of the Tour during their career: proof of the quality of the move and the effort involved to go clear. Katusha missed the move and were forced into the punishment chase but this didn’t last long. It left 14 riders and their team managers pondering how to beat Peter Sagan. Orica-BikeExchange had the best plan: have more riders. Sagan got to work thinning the group with an acceleration that caught out the likes of Rui Costa, Vincenzo Nibali, Sylvain Chavanel and Stephen Cummings. All paid for sitting at the back and trying to save their energy for later and missed the split but none of the Orica riders were lost. In the finish Daryl Impey’s attacks forced Sagan to chase, this was a way to make the Slovak lose. In the five-up sprint Michael Matthews won with ease, the fastest and the freshest thanks to team work, a visible effort after questions over their cohesion last week. Sagan was second and as a consolation back in the green jersey. The Route: 162.5km and almost a copy of Stage 15 from 2011 as the race heads east from Carcassonne to Montpellier: the final 25km are identical. After the Disney start in Carcassonne –  those medieval walls were largely built between 1850 and 1900 – the race heads east. It’s not flat but the elevation changes are small. The town of Alignan-du-Vent gives a clue to the geography, vent meaning wind. Once again the wind is going to get up and if the race briefly split yesterday it could do so again. The intermediate sprint in Pézenas – better known for gonzo singer Boby Lapointe – is on a long straight road. Many of the roads are exposed to the wind. The Finish: the same used in 2011 and 2013, it’s outside the city and near the city’s rugby stadium, a shame the race doesn’t show off the city’s charm but they don’t want the traffic gridlock. The peripheral nature of the approach means roundabouts, underpasses and slip roads.

“The prince owns everything in the kingdom, except the wind.”
– Victor Hugo.

The Scenario: a likely sprint finish, there are not many sprint opportunities left and the terrain doesn’t suit a breakaway. Watch the wind to see if things get mixed up late in the stage, the picks below for sprinters still hold as the sprinters are adept at getting into position in case of split in the field. If the weather forecast does hold it could be a stressful day for the GC contenders. 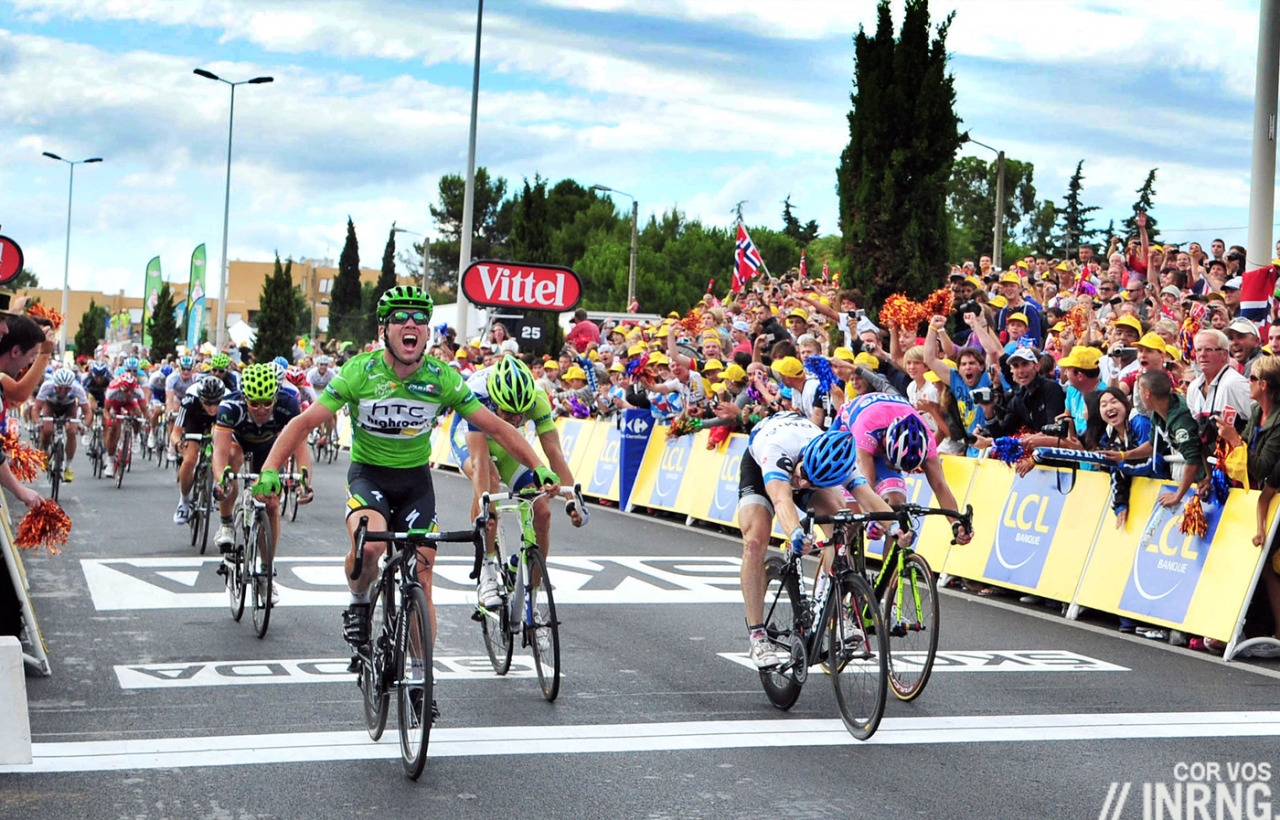 The Contenders: Mark Cavendish has won in Montpellier in 2011 (pictured) but that doesn’t make him any faster today. His condition seems good but how has he fared in the Pyrenees? Marcel Kittel is the other obvious choice, a dragstrip finish for him and his team.

Next comes a second pairing of sprinters led by André Greipel. The German champion ran close on the opening stage but since then he’s been struggling, complaining about a loss of power along the way. Still he won here in 2013 and when German champion too so if you see him celebrate in Montpellier it’s déja vu for real. Bryan Coquard is still hunting for that stage win and his Direct Energie team are almost trying too hard, wasting energy in dud chases and deploying their train prematurely. Both get two chainrings but just.

Don’t write off Dylan Groenewegen, he’s going to win a stage of the Tour someday but whether it’s today or in three years’ time remains to be seen. He’s got the power and leg speed but Lotto-Jumbo are not a force to be reckoned with in the final. The stealth pick is Alexander Kristoff, almost forgotten in this Tour but he can’t be ignored and his Katusha team tried to chase yesterday, a clue he wants to contest the finish? Meanwhile the likes of Dan McLay and Edward Theuns will try but a win seems a shock. Finally Sam Bennett’s recovering from injuries but surely still an outsider for the win?

Weather: sunshine but cooler temperatures than normal with 22°C. The Tramontane will blow, a NW breeze will blow at 30km/h and could gust to 60km/h.

TV: the finish is forecast for 5.30pm Euro time. 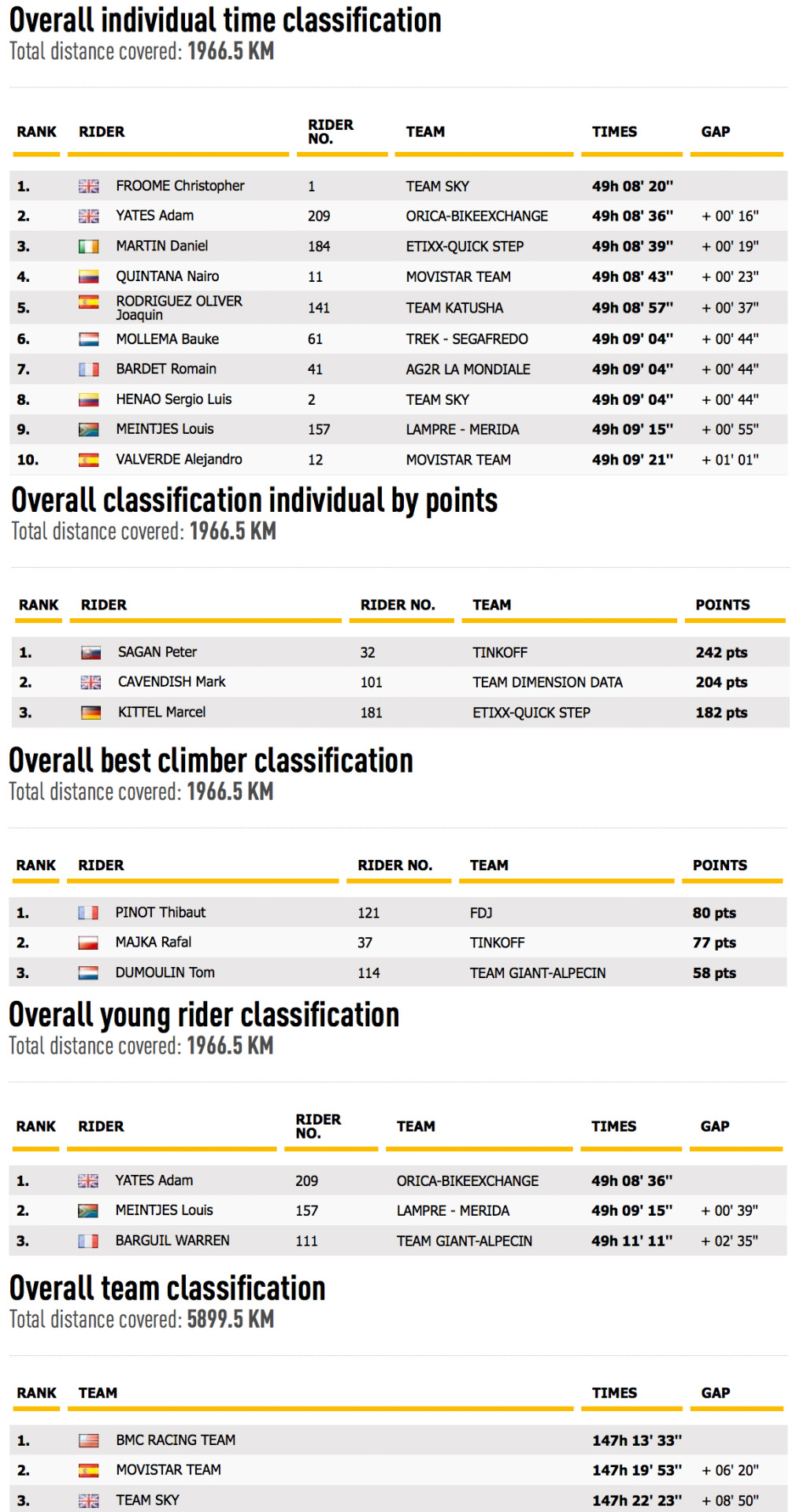