The Moment The Tour de Suisse Was Won Miguel Ángel López attacks over the top of the Flüela Pass. He started the final day of the Tour de Suisse with three riders within 16 seconds of him on the overall classification and once he’d run out of team mates on the climb he took matters into his own hands and attacked to distance his rivals. This aggression was the hallmark of López’s win.

The race began with a home win for Fabian Cancellara, a hit for him on his valedictory season, he took the Strade Bianche race and but just missed the Tour of Flanders and was ill for the Giro so this was an important moment. Only the spell in the yellow jersey was to be brief – a theme all week with the overall lead changing seven times during the nine day race – as Jürgen Roelandts was the right side of a split on the next day and took the yellow jersey. Peter Sagan, part pro cyclist, part stuntman, took the next two stages in part thanks to the work of Orica-Greenedge. It was like one of those youtube clips where a fisherman is proudly reeling in a giant tuna only to find a great white shark chomp it away within sight, certainly Sagan ate Orica’s lunch. In recent years Sagan’s enjoyed a festival of stage wins in Switzerland before going on to win the green jersey in the Tour de France and nothing, or at least no one, seems able to stop him again.

Max Richeze took a sprint win dominated by the final corner, a sharp right-hander in the final 150 metres. The Tour de Suisse often seems to include an unnecessary finish like this. Yes cornering is a skill to master but riders are under pressure. Somehow Danny Van Poppel stayed upright but got relegated by the commissaires for poor handling, a cruel joke it seemed only reports proved false and he wasn’t penalised. The mountains arrived and in the survival of the fittest from the early breakaway Darwin Atapuma won the stage, finally a reward for the Colombian worker. Behind Warren Barguil was the best of the rest among the main GC contenders with Tejay van Garderen working hard at one point, citing “instinct” which should keep Richie Porte on his toes. Ion Izagirre was 15th and lost 27 seconds to López: with hindsight this was the moment the race was lost. Pieter Weening won the next day from the breakaway and marked a good week for the modest Roompot team who collected the mountains jersey with Antwan Tolhoek.

It rained almost all week and this wasn’t the warm summer rain and gentle marination but cold showers that iced many riders. Will this affect the pre-Tour build up for some? “It’s only in the difficulty that you get stronger” said Warren Barguil although this can equally apply to budding viruses looking for a chance to break through. Pierre Latour took the yellow jersey after the first summit finish only to lose it the next day and quit the race ill, still a promising ride and if he could “only” finish 15th when ill he was one place ahead of Geraint Thomas while Tejay van Garderen fared worse that day, lost time and saw his hopes for the overall classification collapse. Continuing the theme of reversals Wilco Kelderman may have taken yellow off Latour but cracked the next day on the high road to Sölden while van Garderen won the stage. Van Garderen was perhaps given more room because of his GC collapse but still out rode everyone else, his late attack was not the kind where anyone could clip away and build up a lead while the others hesitated. Team Sky led the chase with Vasil Kiryienka pacing Thomas until Barguil overheard Thomas asking Kiryienka to slow down, at which point the Frenchman took his cue to attack. He couldn’t close the gap to van Garderen and was joined by López and the pair put 15 seconds into their rivals, putting López into yellow and Barguil up to fourth overall. Behind yellow jersey Kelderman lost two minutes, it seems he ignored team advice and went for too big gearing instead of fitting a 34T inner ring. The stage to Sölden was the Queen Stage. It’s reasonable to ask why the biggest stage of the Swiss race finishes takes place Austria and if the answer is “money” it’s reasonable to question whether this is a revenue stream too far as it undermines a race defined in name by national identity.

Come the time trial and Fabian Cancellara had a long stint in the hot seat, you wondered if he should have brought a book to pass the time. Izagirre dethroned Cancellara and López was also one second faster. This was a surprise but notable as he’s another Colombian who defies the pure climber stereotype, on the bike the resembles a ball of muscle and as an U23 he was better in the time trials, or at least the hilly ones and now did this again in Davos.

Lopez went into the final stage with a slender lead and three riders within seconds of him on the general classification. But if anyone can fend off attacks it’s Miguel Ángel López. He hails from Boyaca in Colombia, the same area as Nairo Quintana. He grew up at 2,600m above sea level on a small farm where his parents owned a few cattle and he sold corn and potatoes by the roadside to earn a few pesos. He got into cycling because he had to ride to school, 8km away according to one interview, 30 minutes away according to another. This accidental training gave him the foundation to win a village bike race and things went from there via a start in mountain biking. He never had it easy, those saved pesos were parleyed into a better bike costing him about $200 but he got attacked one day by thieves who tried to steal his bike but despite being stabbed in the leg by the attackers he saw them off, the story that generated his “Superman” nickname. As for protecting the yellow jersey he’d been here before too. He led the Tour de l’Avenir in 2014 going into the final stage. He had to see off a series of attacks, whole teams were trying to dislodge him but he proved too strong, first attacking to thin the group of his rivals, then setting a fierce tempo to asphyxiate anyone left on his wheel.

So López duly attacked, bridging across to a group of three others including Jarlinson Pantano on the Flüela Pass before attacking again to drop them and lead down the descent. Did he want to win the stage or just begin the descent with a head start? He’s said before that descending has been his weakness, maybe it’s still a concern. As they arrived in Davos Pantano took the stage win and Barguil and Rui Costa just caught the front group while Andrew Talansky had been distanced and fell off the podium. 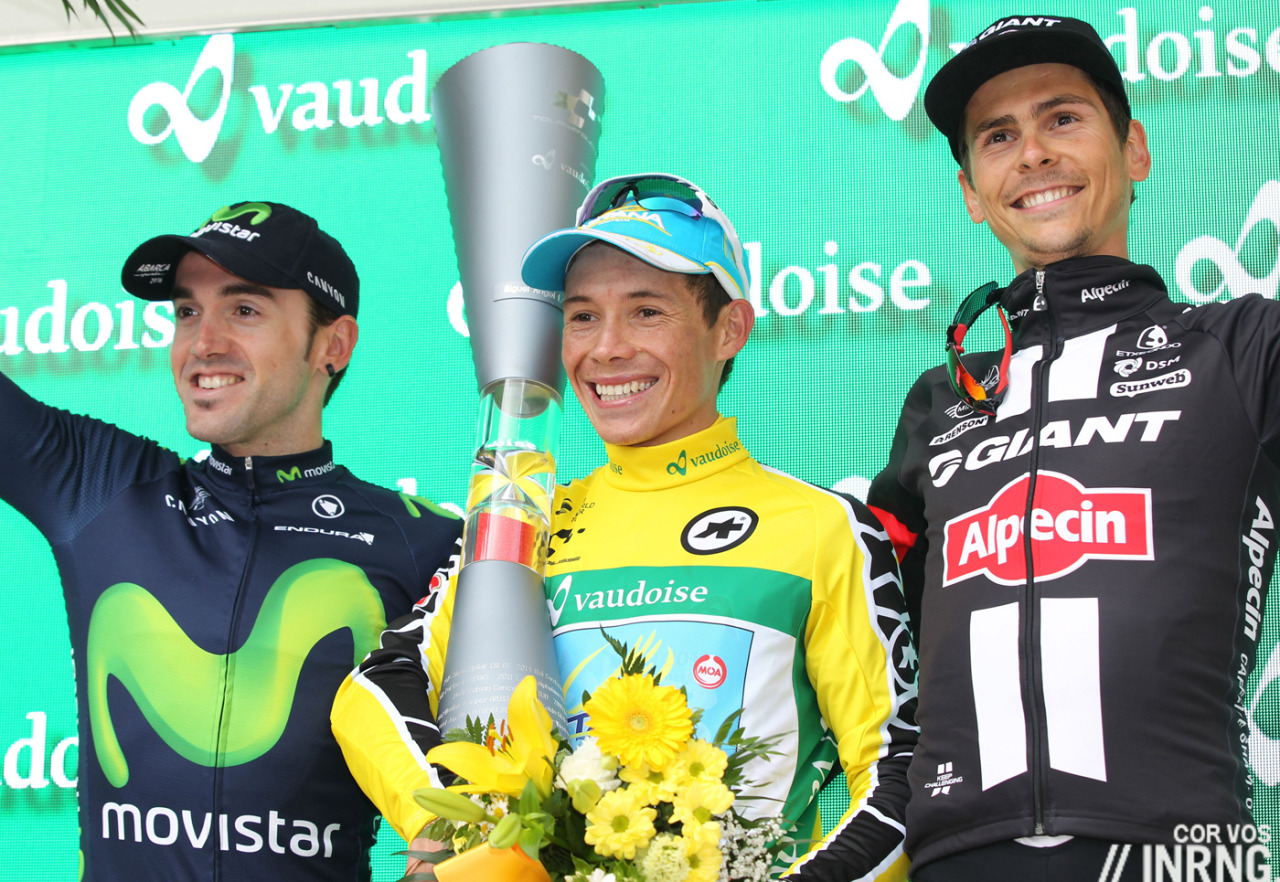 The Verdict
The yellow jersey kept changing shoulders but this wasn’t a vintage edition, too often riders fell away rather than battled side-by-side on the slopes; the result was more a last-man-standing survival contest in the grim conditions. Here there was only one rider, Lopez was among the best every day and showed it on the final day. Izagirre and Barguil join him on the podium and their upcoming goals are more modest, Izagirre to help Quintana in the Tour and Barguil has his sights on the white jersey in the Tour de France. 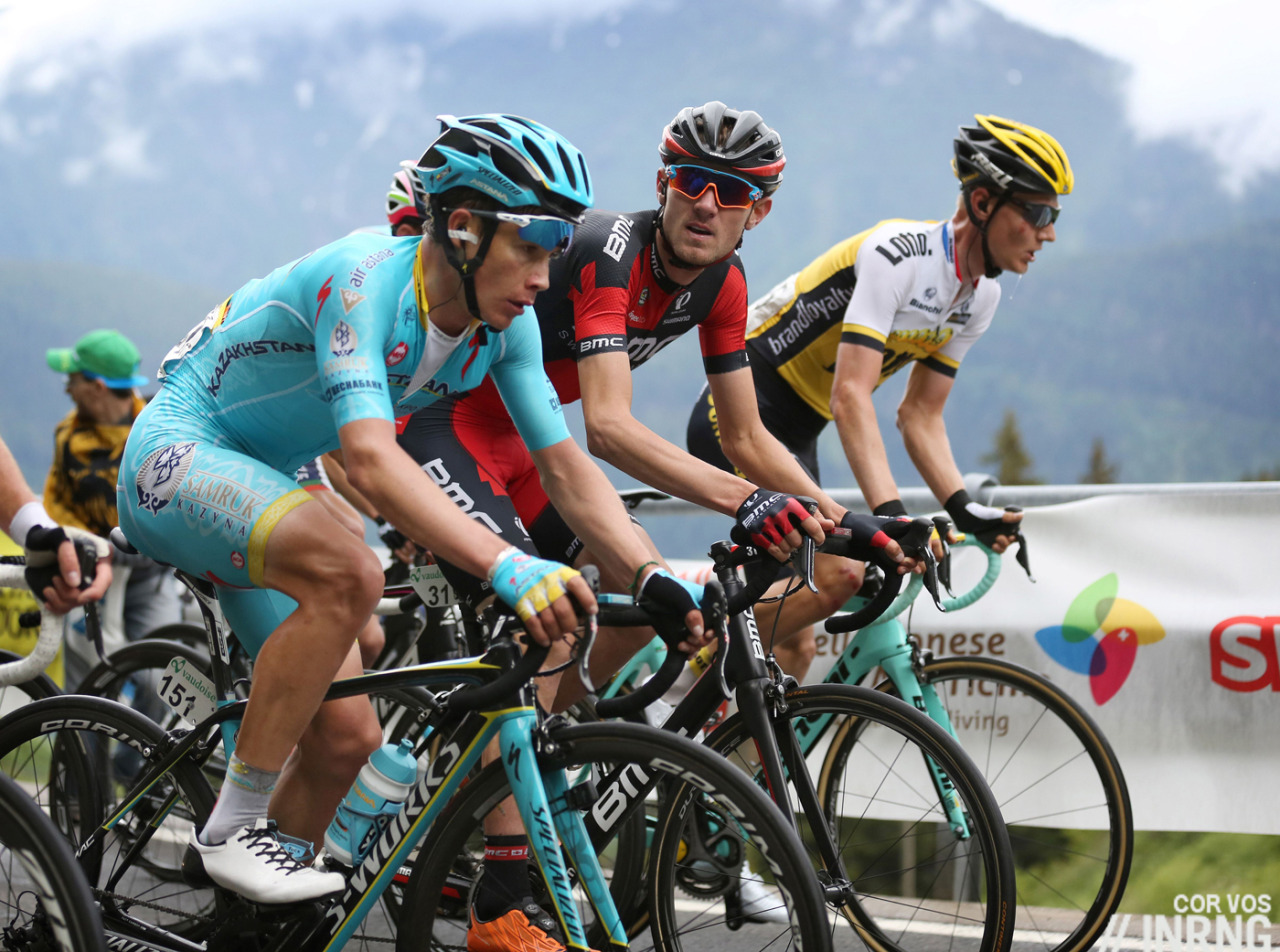 Some other thoughts… What if Tejay van Garderen was Ukrainian? It’s merely a thought experiment but if he didn’t represent an entry route into the giant American consumer market would he be nurtured and groomed to the same extent? He had a solid race but cracked once and saw his hopes of a high placing fall away. The Sölden stage win was more than a consolation, there was no luck here so he’ll be pleased with this, an important win that ensures co-leadership for the Tour de France.

Fellow American Andrew Talansky is back. He delivered a gutsy ride during the week, no more than at Sölden where he put up a fight worthy of his Pitbull nickname only he could not quite seal the deal in the time trial to take the race overall. Infamous among team mates for his rages he’s unlikely to see the glass half full for the comeback here but he is in shape in time for the Tour de France.

Jarlinson Pantano finally delivered big with his first win Europe after years of trying and fourth overall. This will no doubt secure him a job contract but it was the moment that was more impressive, sunshine and showers with his beaming smile and sobbing with tears. IAM Cycling’s demise looks certain now but this may not have motivated him: the team always give one year contracts.

What happened to Team Sky? Their most visible moment might have been Van Poppel’s save. Thomas was climbing ok at times but proved irregular and suffered from the cold on his way to finishing 15th overall. Leopold König quit the race on the final day with a sore throat.

What next for Lopez? The Tour of Austria in July as he’s too young for a grand tour and then he’s part of Colombia’s team for the Olympics and then he’ll ride the Vuelta. During the same weekend the Tour de Savoie Mont Blanc took place, a 2.2 stage race orientated towards small pro teams and development squads and for all the promise in race a 22 year old Colombian had just stamped his name on a World Tour race.