Time for another look at the victory rankings with the Giro completed. The Italian race got a lot of limelight and there were many more chances during the month to take more wins. Here’s a look at the stats and some of the back stories too. 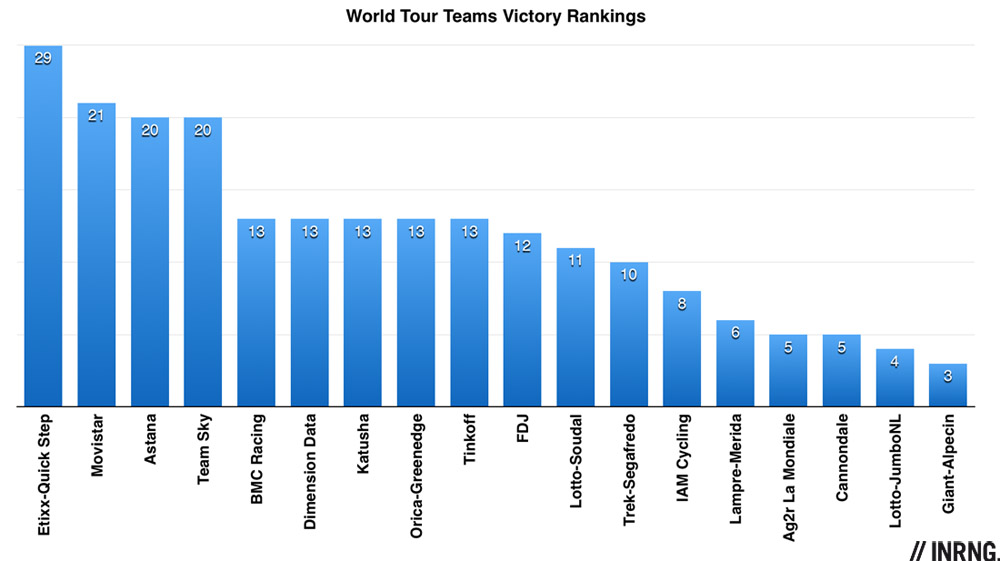 Etixx-Quickstep keep adding on the wins, they had a great Giro and a successful Tour of California thanks to Julian Alaphilippe. 29 wins and look at the width of the team too. 12 riders have won races and all but seven riders have had their own top-10 places this year.

Movistar, Astana and Team Sky come next. The Spanish team is punching above its weight, at least financially as it doesn’t have quite the same budget as the others. If anything Movistar could have taken more wins if house sprinters Rojas and Lobato had enjoyed a better start to the season. All three of these teams have had wins from many riders: eight for Movistar, nine at Astana, ten at Team Sky. Dimension Data have had a good month of may with several wins from Edvald Boasson Hagen and Mark Cavendish but only five riders have won races. FDJ were impressing people with their improved time trialling but haven’t won a thing this month, Arnaud Démare tried in the Giro until he got ill; Alexandre Geniez made the top-10 last year but crashed out early. They’re now hoping to renew Thibaut Pinot and Arnaud Démare’s contracts, both want to stay if the price is right but finding the budget is not easy, their continued presence on the team is dependent on salary but also having the support in place from key – and expensive riders – like Steve Morabito. Today’s L’Equipe says it’s been discussed at the highest level in the offices of the French state lottery.

Lotto-Jumbo’s lowly position in the table is another way to view just how painful Steven Kruijswijk’s Agnello crash was. Success is rare for this team, even small victories are hard to come by so losing a grand tour and falling off the podium because of a mishap must be crushing. If cycling did relegation and promotion then several teams are near the drop zone. But it doesn’t and the likes of Cannondale are safe, indeed the US team is said to be merging with Pro Conti team Drapac. The UCI caps teams sizes so a merger isn’t like a business deal where 1+1=2. In reality Cannondale’s merger looks like a way to get a co-sponsor on board with Australian real estate mogul Michael Drapac. The team has done it all before when the Garmin and Cervélo teams merged. It was said IAM Cycling looked at a merger with BMC but that didn’t work out so the Swiss squad is stopping, meaning one of the newest joiners to the World Tour is leaving. There’s no news on Tinkoff‘s future either but during the Giro La Gazzetta reported Alberto Contador could be working with Ivan Basso to take over the team. Meanwhile of the new Bahraini team links up with Lampre it’ll mean changes in this team, in comes Nibali and his circle of riders and staff meaning out will go some; possibly including Merida too with Argon 18 coming in which means changes for the Bora team. It all makes for a big merry go round, a game of musical chairs.

In one day Giant-Alpecin trebled their win tally in a day going from one win to three thanks to Nikias Arndt’s Giro stage win – at the expense of Giacomo Nizzolo  – and Zico Waeytens’s stage in the Tour of Belgium last Sunday. With neo-pro sprinter Max Walscheid back to racing in the Tour of Belgium all of the riders involved in the crash in January have returned to racing. 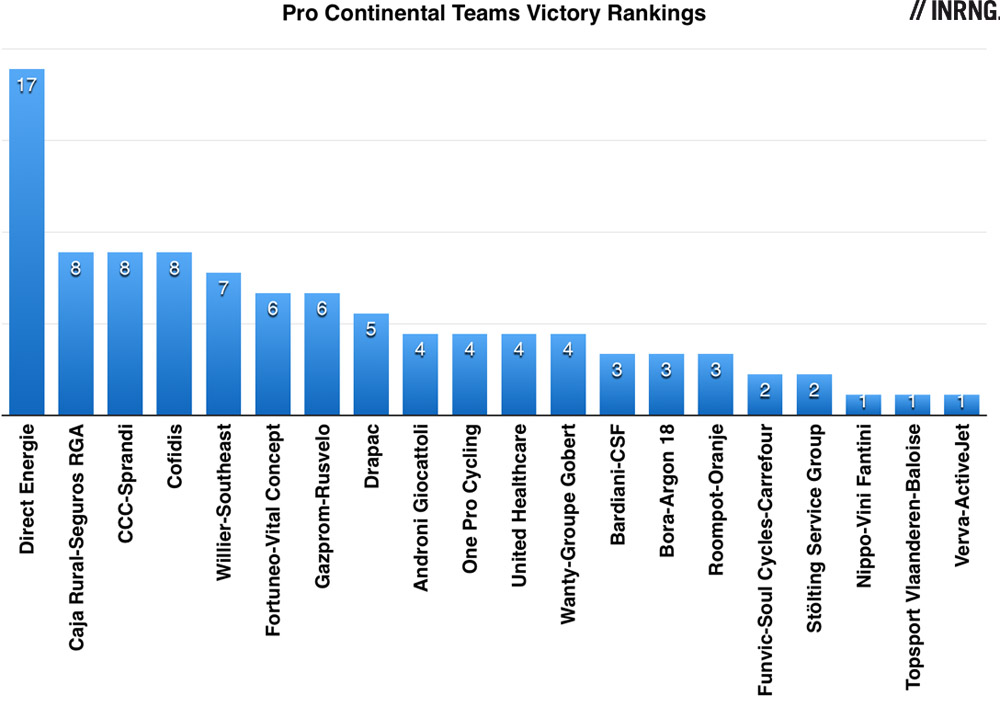 Direct Energie have more wins than the next two teams combined. If this was a football league table then they’d look like prime picks for promotion already. Only it isn’t and they’re not. I suspect you’re trying to think where those wins all came from?

British readers will surely recall Thomas Voeckler’s two wins in the Tour of Yorkshire when he took the final stage and overall classification. Since then Bryan Coquard took three stages and the overall in the Four Days of Dunkerque. All good but promotion to the World Tour isn’t on the radar, they’re happy where they are. Coquard is central to the team but yet to win a World Tour race and has only twice won outside of France, two stages of the Tour de Langkawi in 2013. He’s got his eye on the Tour de France but so does Peter Sagan, John Degenkolb, Greg Van Avermaet when it comes to an uphill sprint.

Caja Rural are becoming a promising team, the new Euskaltel. Whereas once all Iberian races had to pick Caja Rural out of obligation given the lack of other local outfits to join now they’re a lively prospect who promise to bring more animation than Disney to a hilly stage race. Hugh Carthy’s been a revelation and the subject of interest from several teams although he says he’ll consider renewing with Caja Rural. Meanwhile CCC Sprandi have been invited to some World Tour races but have collected wins in their backyard with the Tour of Estonia and the Bałtyk-Karkonosze Tour. Cofidis are on eight wins and as ever built around Nacer Bouhanni who has resumed racing recently after a post-classics break and took two stages in the modest Tour de Picardie and the overall. The real test for him is the upcoming Dauphiné and the Tour de France. Pro Conti vs World Tour
As far as wins go there’s little contest. Among the second tier of teams Cofidis have three World Tour wins, all thanks to Bouhanni. Bardiani-CSF have one with Ciccone’s Giro stage, mission accomplished especially as it was achieved in the team’s home region. Gazprom-Rusvelo took a stage of the Giro too thanks to Sacha Foliforov mountain TT. Wanty-Groupe Gobert won the Amstel Gold Race thanks to Enrico Gasparotto. And that’s it, just six wins in the World Tour across all the Pro Conti teams. Of course winning isn’t everything but it does highlight just how hard the smaller teams have it when they compete in the biggest races, a win is very rare.

Bora-Argon 18 are a good team and getting all the best invites but have few wins to show. House sprinter Sam Bennett has been very quiet. Androni are among those teams with no wins, they have taken the Tour of Bihor in Romania but this is a 2.2 race and so doesn’t count for the rankings. Fortuneo-Vital Concept used to be Bretagne-Séché, a team with a big regional identity but so far all their six wins have come from foreign recruits with Dan McClay on three.