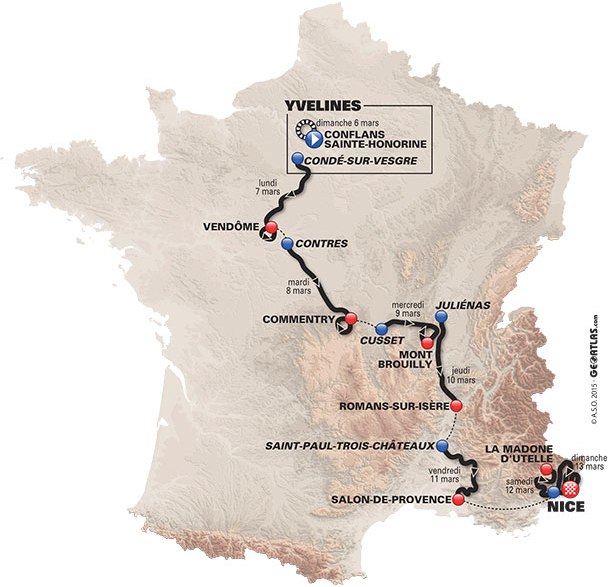 The route for the 2016 Paris-Nice (6-13 March) is out. It lets us look through to the other side of winter to one of the first major stage races of the year. There’s a blend of old and new with familiar places alongside novelty like the introduction of gravel roads for one stage.

Already there’s a strong list of contenders with Richie Porte, Chris Froome, Alberto Contador, Fabio Aru and more. Here’s a look at the route and more. 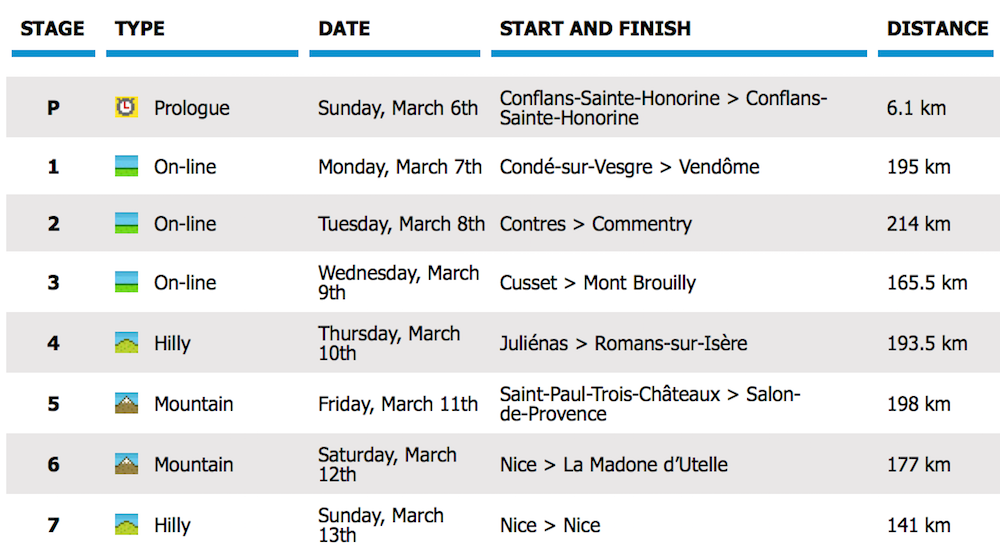 The race opens in the Yveslines area outside of Paris so once again a race has the “Paris” label without starting in Paris, even if it’s a regular haunt of Parisian cyclists. The 6.1km prologue time trial is the only race against the clock all week and it should be one for specialists given the area, at the confluence of the Seine and Oise rivers, is flat. Nicolas Roche was born here, maybe a swing factor to encourage him to start.

Stage 1 looks set for the sprinters as it heads southwest to Vendôme using those flat exposed roads you see in Paris-Tours only this time there’s a genuine novelty: gravel roads. There’s one 600m segment and another of 1300m, both limestone gravel to be covered late in the stage and it features in the clip above. ASO uses things like this as a test so it might not be long until this kind of obstacle appears in the Tour de France. It’s made for TV with added drama given the track runs alongside a cemetery. It’s been used before in the Tour du Loir-et-Cher.

Stage 2 offers more certainty for the sprinters with the longest day of the week to Commentry and again on exposed roads in case teams want to exploit the crosswinds. Commentry is unremarkable but sits on a plateau among the Combrailles hills so there’s a chance to derail the sprinters… and to engineer a win for local hero Julien Alaphilippe who lives 15km away.

Stage 3 is the first summit finish at Mont Brouilly (more at Roads to Ride – Mont Brouilly). This is no high altitude climb and despite the graphic from ASO, doesn’t even reach 500m being 486m high and 3.5km in length. It’s notionally 3km at 8% which would be spiky enough but the difficulty comes in the stairway feel where steep ramps are followed by brief landings making hard to time the effort, surge on a 14% ramp and you have to change to a big gear on a level section. The race visited in 2014 crossing the climb before a rendez-vous in nearby Belleville. Tom Slagter went clear and was joined by Geraint Thomas over the top and the Dutchman won the two-up sprint. This time the race will climb up, take the sketchy descent back down and then return for the summit finish outside the Our Lady of the Grapes chapel. Champage for some, sour grapes for others. Stage 4 is another day for the sprinters as the race leaves Juliénas, famous for its wines, and heads to Romans-sur-Isere, home of Ag2r’s impressive neo-pro Pierre Latour.

Stage 5 borrows the slopes of Mont Ventoux going from Bédoin towards Chalet Reynard and then down to Sault meaning it takes the hard section of the climb through the woodland but descends just before the lunar scenery. We might want a monster summit finish but it’s unwise in March given the weather. This is a gentle tribute before the Tour de France visits in July. It’s a scenic tour of Provence as long as the Mistral wind isn’t blowing and a good day for a breakaway or a sprint among more versatile riders who haven’t been sapped by the climbing along the way.

Stage 6 has the race starting in Nice and heading inland for a series of climbs known to all the local pros and Monaco expatriates, this could be one of Philippe Gilbert’s training rides. The finish is particularly scenic, a blend of the profane and the sacred as ASO’s commercialism exploits the Utelle sanctuary for the first time. Effort wise it’s 15km at 5.7% and not unlike a mini-version of last summer’s La Pierre St Martin summit finish in that the steepest parts are mid-way, a rider like Chris Froome or Richie Porte will look to attack here and go into TT mode moments later once the gradient eases.

Stage 7 is the final loop around Nice and a repeat of previous years with the Col d’Eze featuring in the finale. The day features punchy climbs and nervous descents before a finishing circuit.

Route summary: a mix of the old and new. On paper the prologue and first two stages look benign but if the wind is up and the riders stress about the gravel roads then it’ll be game over for some GC contenders before they even reach the fun mini-summit finish atop Mont Brouilly. Otherwise the time gaps will stay small until La Madonne d’Utelle. Likely Contenders: there’s a good mix of stars and interesting prospects on hee provisional startlist already. 2015 winner Richie Porte returns and will be both a friend and rival to Chris Froome who comes with Geraint Thomas, now keen to pick of stage races. Alberto Contador is planning to ride and so is Fabio Aru, the Italian is now among the best but has yet to win anything outside of the Giro or Vuelta so this a both a chance to gain experience and spread his wings. Simon Špilak is specialist in one-week races who thrives in cold weather. Romain Bardet can test his nerves in the opening stages while Andrew Talansky will be podium hunting after a lean 2015.

Wildcard invitations will be announced in January.

TV: it’s on TV whether Eurosport or the same channel you use to watch the Tour de France