The course changes every year but the race remains the same, a long distance test across the plains, valleys and climbs of Italy’s Lombardia region, a scenic race for viewers and a technical challenge for participants with double-digit gradient climbs and numerous twisty descents. The Course: another year, another new course although this includes all the classic ingredients of recent editions. A start in Bergamo – last year’s finish – sees the race head to the Colle Gallo, a good steady climb of 6km at 6.9%, maxxing at 10% and followed by a wide descent with some tight bends yet few surprises before the race takes the Serio valley back to Bergamo and the feedzone. The climb to Colle Brianza is 4km at 7% which sounds fine only near the top it’s 20%. A descent and then the scenic loop alongside the shores of Lake Como to Bellagio and the start of the Madonna del Ghisallo climb. The climb, thanks to this race and the sanctuary at the top, is among the most well-known roads in the sport, a marriage of sport and religion. It starts hard with 10% gradients and tight hairpin bends. The first four kilometres continue at 9% with some steeper ramps before the road levels out from Palaino to Civenna before the final ramps to the Ghisallo chapel. It is really two climbs, a steep early section followed by flat and even downhill sections as the route goes through the village of Guello before the final kick via snaking hairpin bends to the chapel… and then there’s a pesky false flat that drags on and then a high speed descent with blind bends and some off camber corners.

Next comes the Muro di Sormano, a climb so steep that it’s hard to attack with 2km at 15% and 25% for a while. It’s an infamous climb, described by 1958 Giro winner Ercole Baldini as unnecessary and “beastly, impossible to ride” but today’s gearing makes it more accessible. If anything the climb is the manageable part as you’ve either got what it takes or not and the descent is harder because it’s wild in places.

Next is the climb to Civiglio, a regular 10% ramp all the way up for 4km making it very difficult after 220km.

The Finish: the race dips into Como but heads out for the final climb of San Fermo della Battaglia, a series of 7% ramps winding up to the 5km to go point and then followed by a regular descent which flattens out with just over 1km to go. 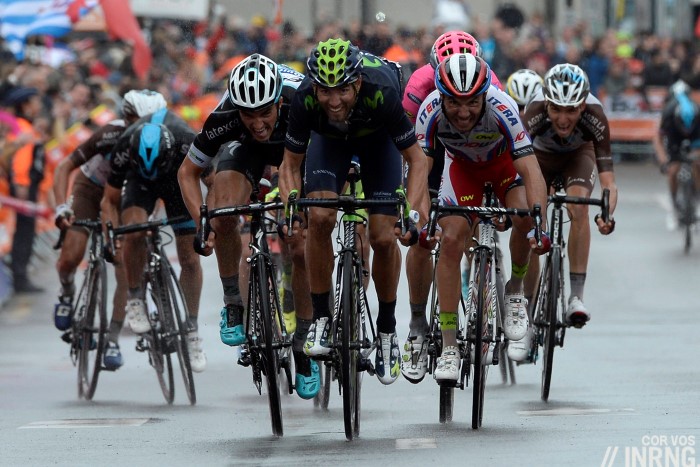 The Contenders: Alejandro Valverde is the prime pick. He’s got everything needed to win, from climbing ability to a fast sprint out of a small group as well as a crafty tactical sense and he’s still in form too as 5th in Richmond shows, a result even more impressive than previous third places given the course didn’t suit. He’s also having one of his best ever seasons but this is also a discount factor as he’s got to be tired but the Murcian surely wants more. Team mate Giovanni Visconti is in good shape and an outsider, especially adept at late attacks while the others mark themselves out.

Vincenzo Nibali is in top form and has had some excellent results of late including the Tre Valle Varesine on Wednesday. His problem is that he’s such an obvious contender and his style is to attack and ride solo for the win: all or nothing. It seems likely he’ll jump on the climb to Civiglio. The wet weather suits his skills and he comes with a strong Astana team including outsider Diego Rosa and helped by the presence of Fabio Aru… at the Tour of Almaty in Kazakhstan rather than standing in his way.

Katusha sidekick Dani Moreno is a contender too after his top-10 finish on the Superga and assumes team leadership after Joaquim Rodriguez pulls out with a knee injury.

Rafał Majka (Tinkoff-Saxo) was beaten in Milano-Milano but had to cope with the attacks from Astana. Sunday’s course should be more selective and mean he and others aren’t outnumbered, or at least less so. But how can he win? He’s a strong climber but a bit of diesel, presumably he’ll try on the way up to Civiglio. Rui Costa is a sleeper pick. If Valverde and Rodriguez are marking each other then who better to teach them a (repeat) lesson? He’s going well with good results in Canada but as ever wins come rare. Lampre-Merida team mate Diego Ulissi (pictured) is perhaps a stronger choice, the Tuscan is in good form and can climb and sprint well and needs a result to put his name back in the limelight after it’s been overshadowed by the performances of Aru, Nibali and others plus that anti-doping suspension. Philippe Gilbert (BMC Racing) has thrived in this race but that was back in the day when he seemed to have be invincible. The 2015 vintage hasn’t been as sweet as previous years and currently his form seems strong but not super. But he’s enjoyed Italy this year with two stages in the Giro including his stylish win in Verbania on similar roads. If he can manage with the attacks from the climbers he’ll back himself to win a sprint.

Thibaut Pinot has been dreaming of this race for years and now starts as a contender after trying to make dreams come true with 275km training sessions. He’s in form with a strong showing in the Tre Valle Varesine and Milano-Torino but this is also his problem, a tendency to show too early sometimes. He’ll also have to cope with the descending on roads that others know better. His FDJ team are offering good support with Alex Geniez and Kenny Elissonde.

Ag2r La Mondiale have Romain Bardet, Alexis Vuillermoz and Domenico Pozzovivo, all in good form. Vuillermoz is punchy but over 245km? It means Bardet and Pozzovivo the safer picks and the wet roads and tricky descents could be perfect for Bardet although the team has had issues with their tires in the wet. 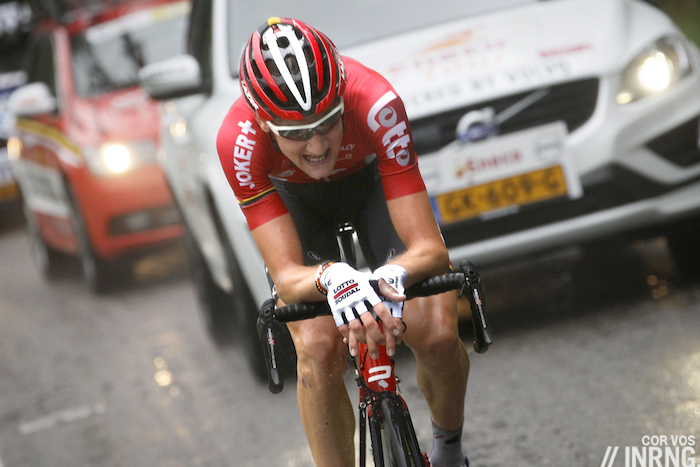 Lotto-Soudal have another trio in Tiesj Benoot, Tim Wellens and Tony Gallopin with the latter two as the best picks given the hilly course. But how Wellens and Gallopin get the better of everyone else is hard to see, they will have to take risks.

Orica-Greenedge have Simon Gerrans with maybe a little point to prove after a few stories in the week about whether he should have helped Michael Matthews more last Sunday. Meanwhile the Yates brothers offer more options on a hilly course as does Esteban Chaves but is he smiling again after a gruelling Vuelta?

From trios to a quartet as Trek Factory Racing have Frank Schleck, Bauke Mollema, Julian Arredondo and Fabio Felline. On paper the course suits Mollema but Arredondo’s in improving shape, making the front group in the Tre Valle Varesine and Milano-Torino. 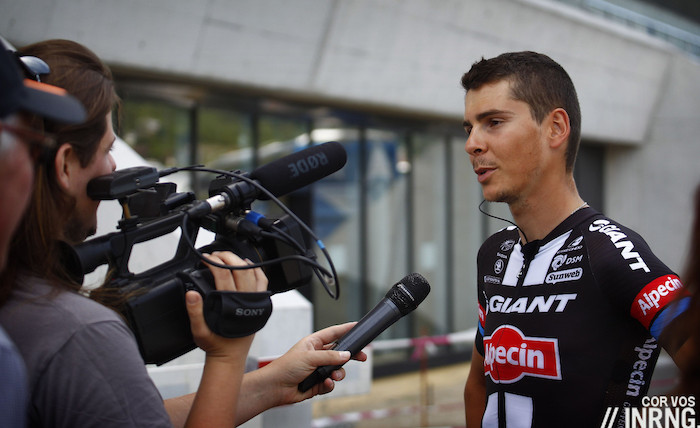 Warren Barguil leads Giant-Alpecin, ninth in Québec is promising but there’s not much more to go on, still his racing style is suited to the course and Tom Dumoulin is promising to help out too, the Dutchman is obviously more than a domestique.

Robert Gesink is Lotto-Jumbo’s best shot for Lotto-Jumbo. Over at Team Sky another Dutchman in Woet Poels is riding well with fifth on the Superga summit finish and he’s due a result but this would be huge for him, Sergio Henao is the team’s other option. Last year’s winner Dan Martin has history on his side because this is a race where many have repeated wins. In fact since 2005 every time somebody has won the race for the first time they’ve won it again the next year with the exception of Marmotte wannabe Oliver Zaugg in 2011. Martin’s should be suited to this course but is returning from injury and if his result on the Superga last Thursday was good, it’s another thing to ride away. Tom-Jelte Slagter is back in form and he’s shown strength on steep hills before but rarely in a races as tough as this.

Michał Kwaitkowski cramped up last year but is now freed from pressures about his rainbow jersey and leads Etixx-Quickstep and is in good shape, he could try a long raid or just try to stay with the climbers and beat them. Gianluca Brambilla rides on home roads and has been climbing well; a win would be a shock but he should show at some point while surely it’s all to hilly for Zdeněk Štybar?

Finally before we run out of time there’s Damiano Cunego (Nippo-Vini Fantini) and Davide Rebellin, 34 and 44 years old respectively. Both are in form right now and Cunego is riding his last race before retirement, he’s won this before and still packs a punch out of a small group.

Weather: wet with intermittent showers and a top temperature of 16°C in the valleys and plains, cooler at altitude.

TV: they start climbing the Madonna del Ghisallo around 3.00pm Euro time which is when the TV coverage from host broadcaster RAI3 starts and it’s relayed on Eurosport. The finish is forecast for 5.00pm. If you can’t find it on TV, try cyclingfans and steephill for a pirate feed.

Il Lombardia? The name has changed too, for decades this was the Giro di Lombardia, the Tour of Lombardy, but owners RCS want to make giro synonymous with Giro d’Italia and so they’ve been using the label of Il Lombardia. It still feels awkward but that’s normal given this race began as Milan-Turin in 1905 got relabelled as the Giro di Lombardia in 1907 and stayed that way for over 100 editions.

Next post: The Moment The Race Was Won: Il Lombardia