Roads to Ride: The Ghisallo 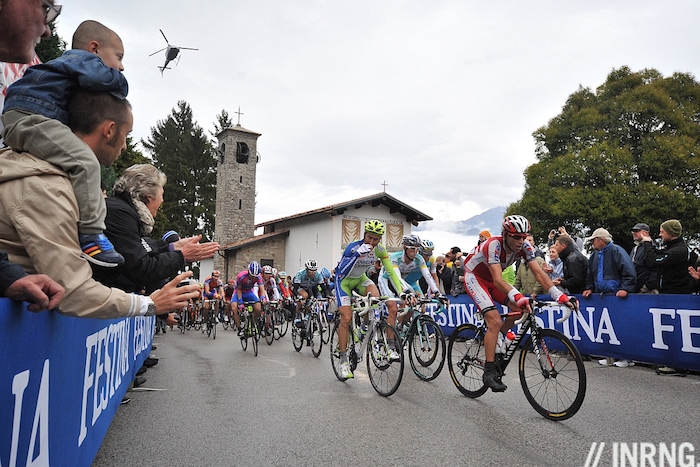 As the second part in a series exploring the famous roads of cycling, here is the Madonna del Ghisallo climb in Italy. The idea with this weekly series is to discover the road and its place in the world, whether its part in cycling’s folklore or to explore what it is like on a normal day without a race.

The Madonna del Ghisallo was described as “the poor man’s spaceship” by Italian writer Gianni Brera for the way it allowed someone with a bicycle to copy Neil Armstrong and go up to the heavens. It’s not the highest of climbs, perhaps the chapel at the top, a Catholic shrine to cycling, plays its part.

Some places can be significant in sport because of history but this is a climb that raises sports fanaticism to the exponential, propelling memorabilia and history into relics and spiritualism thanks to the chapel, the Pope and aided by sporting history and the stunning views.

The Route
Strictly this is the Colle del Ghisallo, the mountain pass. The Via Valassina climbs out of the swanky town of Bellagio, with its luxury lakeside villas. The climb is 10km long and averages 5.2% but beware as the climb is broken in two parts as the profile below shows.

The first part rises from the roundabout via a series of steep ramps that pick their way past houses and hotels. The road gradually becomes more verdant and often hugged by crash barriers whose diagonal slant testifies to the slope. The gradient bites with sustained sections over 10% and moments at 15%. And then it’s over, all of a sudden the road flattens out as you reach Guello. If you’re not used to the route you can wonder where the road goes, a turning to the right here offers more climbing but in fact it’s time to deploy the big chainring and speed along Civenna’s Via Provinciale before the road finally turns right after the church and the final ascent. As the buildings disappear a final set of hairpin bends approach, time to sprint when you see the Hotel Mirabeau and the pass finishes with the famous chapel on the left.

The Feel
Lake Como below is elegant but touristy and it is satisfying to escape. The climb starts hard and it is irregular, quietly changing gradient as it winds its way up. The chapel at the top gives the climb a spiritual vibe but there’s nothing heavenly about the early part of the climb and if an eternal flame burns in memory of deceased champions at the top, your legs will be on fire on the way up. If anything this is just a road uphill, an artery linked to the capillary-like paved driveway of the many houses that line the road.

The middle section is literally an anticlimax. After the effort the gradient eases then descends and heads into town where traffic lights await before the rider is cleared for the final section.

If the buildings crowd the climb there are still stunning views. Best of all this is a climb for all four seasons. Avoid on the coldest winter days, but if a warm sun is shining this is a treat all year. Lake Como offers blue water and reflects the sunshine while the woodland, a mix of pine and oak, provides changing tones, from the vibrant green of spring to the famous autumnal hues that helped the one day Tour of Lombardy race become known as the classica delle foglie morte, the race of the falling leaves.

The terms are used interchangeably but Colle Ghisallo is the mountain pass, colle being a pass. Madonna is the religious icon in the chapel.

History
The legend varies but in medieval times Count Ghisallo was fleeing brigands in the woods and either saw in a vision in the chapel which ultimately led him to safety, or worse his dying wish was that a chapel be built. Either way he left his name to the chapel but the construction was rebuilt and the building today dates from 1623.

Jump to 1944 and Don Ermelindo Viganò became the priest of Magreglio, the village at the top of the climb and he became responsible for the chapel. He seems to have been impressed by the passage of the cyclists and lobbied to link the chapel to cycling.

Race History
This is a very famous climb but it’s not always decisive. The Tour of Lombardy, now branded Il Lombardia, has often changed its start and finish point but the Colle Ghisallo has been a fixture since 1919. These days it is not a strategic climb but one that help eliminate weaker riders and sets things up for later attacks.

But the race has been ridden by every champion, starting with Costante Giradengo in 1919. By 1925 Alfredo Binda took the train from Nice to Milan, attracted by the prize offered for the first rider to the top of the Ghisallo. He attacked and won the small prize but rode on and landed the first of his four wins. After World War Two the climb was becoming easier thanks to smoother roads and bikes with more gears. “Capisco che il Ghisallo non dava più garanzie di selezione” said Ercole Baldini in 1960, stating that the climb was no longer selective, inciting race organisers to track down tougher climbs like the nearby Muro di Sormano.

More recently Paolo Bettini rode up in 2005 and set a record, reputed to be 19m30s and, at the time of writing, the Strava record is there for the taking at 22 minutes.

The climb has also been used in the Giro but its fame comes from extra-sporting rides. In 1949 Pope Pius XII ordered that the Madonna del Ghisallo become the patron saint of cyclists and soon a torch was carried by bicycle from the Vatican to the chapel with famous riders taking part in the relay.

The Chapel and Museum
You don’t need to be a devout Catholic to enjoy the chapel and venerate the sports history. The walls are insulated with cycling jerseys and various bikes hang there, from a tired looking Bianchi belonging to Fausto Coppi to the twisted frame crashed by Fabio Casartelli when he died during the 1995 Tour de France.

Next to the chapel is a broader museum of cycling which curates a lot of Italian cycling history. Both are worth a visit but note if you can click-clack in cycling shoes to look in the chapel, think twice about the museum. Be sure to stop and see the view of Lake Como from the top too. There’s also a fountain to top up your water bottles.

On a normal day
The road is quite ordinary. Inhabitants tend to their gardens, cars rev as drivers work their gearboxes to tame the slopes. There’s a good chance of spotting a pro or two, especially a Lampre rider as the team has its base nearby and tends to recruit from Lombardy.

Access
Milan is nearby although a busy ride for much of the way. A better base is to be found around Lake Como, perhaps Lecco where if the roads still buzz with activity you can escape uphill. The best time to visit is the weekend. The mornings see the roads crowded with cyclists, with many silver fox types who ride the finest bikes available. Just don’t expect Italian artisan bikes, a Specialized with SRAM is as common as a Colnago with Campagnolo.

The Triangolo Lariano area is the triangle of land between the two fingers of Lake Como that jut to the south. The Colle Ghisallo is a key road here but there are many ways to cross and climb this area. It’s also one of the rare climbs in cycling that is probably at its best in the autumn with the turning leaves.

Summary
It’s one thing to venerate a place for its history and scenery but the Colle Ghisallo is exceptional thanks to its religious links, perhaps the spiritual home of cycling. But it’s certainly not reserved for the devout Catholic; you can visit for the collection of jerseys and bikes and a glimpse into Italian life where sport crosses with religion and superstition. Plus there are statues outside and the cycling museum too.

Away from tourism this is a tough climb but the mid section allows everyone to recover before a satisfying series of hairpin bends to the top. Like Alpe d’Huez this is not the most scenic nor challenging route but it has its place in cycling mythology thanks to the chapel and the passage of races over the years.

Next week we will combine history, a tough climb, stunning scenery and if not religion then sacrifice and philosophy: Mont Ventoux.