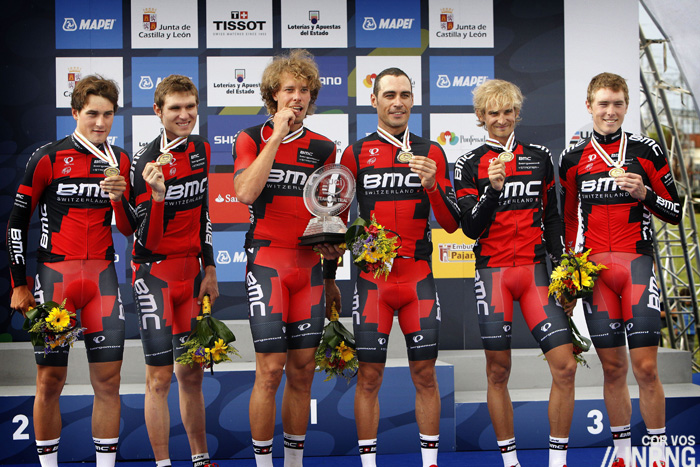 This Sunday’s team time trial world championships is the odd one out on the calendar for several reasons, whether it’s the trade teams gathering for the worlds which is all about competing nations or the presence of a team time trial race outside of a stage race, a rarity these days. Here’s a look at the format and the contenders for the first title in Richmond 2015.

A team time trial during a stage race can offer a challenge and added significance for the overall classification too but Sunday is all about one collective effort in search of the world championship title. You might not be that excited by this event but it really matters to team managers because they can handpick teams, work on the drill and please sponsors with the collective effort. However only a few teams are in contention and some resent this race as they must fork out a lot of money to fly their entire team including support staff and excess bike just to be humiliated by the big budget teams.

Team Size: six riders per team, small compared to the nine we’re used to seeing in a stage race. The time is be taken on the fourth rider. Smaller teams of six means much less rest per rider and punishes any teams trying to make up the numbers with non-specialists.

No Rainbow Jersey: There’s no rainbow jersey for the team time trial world champions. Instead the six riders and the team manager get a medal after the race. Next year the team gets “the distinctive logo” on its jersey (pictured). This is not for the six winning riders on the day but for the whole team to sport the following year. Indeed it is theoretically possible that all six could move or retire from the winning team but come 2016 the continuing team can sport the UCI logo.

The Course: 38.km and a vertical gain of 240m. The course starts north of Richmond, heading south and through the city to go back out towards Richmond Heights and then turning back again for a finish downtown. Along the way there are long straight sections to suit teams capable of holding 60km/h. The Contenders: BMC Racing won last year and return with four of the winning six from last year with Taylor Phinney instead of Peter Velits, arguably making an even stronger team. They won the Vuelta’s beach race and the Tour de France an Dauphiné stages too and Rohan Dennis is probably stronger than ever. Manuel Quinziato and Silvan Dillier might not be famous for time trialling but they are powerful engines and very well drilled.

Etixx-Quickstep have won before and come with a very strong team. Tony Martin counts for two riders while Rigoberto Uran is in good shape after a win in Canada. Yves Lampaert, Niki Terpstra, Tom Boonen and Michał Kwiatkowski are all strong and capable of working well together.

The third pick is Orica-Greenedge. The team’s DNA is full of the Aussie team pursuit programme and this forms the base for the squad. Svein Tuft is 38 but if anything the squad is young with room for improvement with the likes of Michael Hepburn and Damien Howson fresh out of the U23 ranks.

Movistar have a strong team with proven TT specialists Jonathan Castroviejo, Alex Dowsett, Adriano Malori backed by German rouleur Jash Sütterlin, the powerful Andrew Amador and odd man out Winner Anacona, no slouch when it comes to riding tempo but the others all look faster.

Team Sky have some strong rouleurs in Richmond but it’s not their A-team, especially with Elia Viviani in the mix, a handy rider but covering for absent riders like Geraint Thomas. A podium is just possible.

The course looks too flat for Astana. If it had more climbing then their more versatile selection would be a great pick to challenge BMC and EQS’s bulky classics riders. At pixel time the team isn’t confirmed but looking among their provisional list Rein Taraamae, Lars Boom, Andrei Grivko, Jacob Fuglsang, Alexei Lutsenko and L-L Sanchez are all good picks.

Tom Dumoulin stretches his legs with Giant-Alpecin and this time he’s got a team in support. Nikias Arndt, Chad Haga, Ramon Sinkeldam, Georg Preidler and TT specialist Tobias Ludvigsson all look useful but it’s hard to see them as world-beaters. Dutch rivals Lotto-Jumbo lack an obvious TT star but have a mix of solid TT riders like Jos Van Emden and Wilco Kelderman alongside classics powerhouse Sep Vanmarcke and Maarten Tjallingi.

Tinkoff-Saxo have to make sure Peter Sagan doesn’t rip things up. Maciej Bodnar, Michael Rogers, Michael Valgren, Manuele Boaro and Christopher Juul-Jensen are all strong against the watch and if they can get the drill right a medal is there.

IAM Cycling are well drilled and come with some strong, often underrated time trial riders like Mathias Brändle. A win seems impossible, even the podium seems unlikely but as one of the World Tour’s more modest teams they should punch above their weight. Cannondale-Garmin have some good engines in Ramunas Navardauskas, Moreno Moser and Dylan Van Baarle. Finally they’ve had some bad experiences this year but reduced to six Ag2r La Mondiale don’t have to carry non-specialists like they do in a stage race and their core of riders should stave off humiliation from the lesser teams. Weather: warm and sunny with a 15km/h breeze from the north-east meaning a headwind on the final leg into town. The course is exposed in places and urban in others meaning. The are seconds to be gained from exploiting the shelter along the way but otherwise it’s a calm day.