2015 is drawing to a close you might think that excluding the World Championships and its national team format there are only a few races to go like Paris-Tours and the Tour of Lombardy but there are still 66 days of racing left on the pro calendar, although half of these come from Chinese races where few World Tour teams venture.

For now Etixx-Quickstep lead the rankings and look set to stay at the top thanks because they’re so far ahead of the others. Scanning the chart Lotto-Soudal’s excellent season is visible and Marcel Kittel’s absence for much of the season is visible for Giant-Alpecin. As we’re well into the transfer season you can start to see some teams trying to change trajectory for 2016.

Etixx-Quickstep win on quantity but quality is debatable: 51 wins and eight in the World Tour. Timing matters and they got three stage wins in the Tour de France plus the Amstel Gold Race but they’ve racked up a lot in races like the Tour de Poitou Charentes and the Czech Tour where’s there’s not much TV coverage. Still it’s been an excellent season and the team is packed deep with talent, even stagiaires win like Fernando Gaviria. World champion Michał Kwiatkowksi can be missing from results but others take his place; if this happened on another team they’d be asked weekly for explanations. Alexander Kristoff has scored half of Katusha‘s wins. He had a lull during the Tour de France but is looking good for the end of the season and the upcoming World Championships. Joaquim Rodriguez has scored six so if he struggles to win a grand tour there’s still action along the way. It’s not all be champagne and joy with Luca Paolini’s Tour de France cocaine test and Giampaolo Caruso’s EPO retest, both of which rumble on.

Lotto-Soudal are next thanks to André Greipel’s great season. It wasn’t long ago that the team rhymed with chaos, not merely underdogs to compatriots Etixx-Quickstep but error prone. Now they seem more cohesive, perhaps it’s a sharper focus on winning? This might sound an obvious goal but they spent years and resources chasing the overall classification in grand tours and this has ended. It leaves Lotto-Soudal to focus on sprints and bringing on punchy riders like Tim Wellens, Tony Gallopin and Tiesj Benoot. Jens Debusschere and the recovering Kris Boeckmans have brought more sprint wins.

Tinkoff-Saxo sit mid-table. Alberto Contador won the Giro without taking a stage so a big win but without the additional score. Keen as ever, Oleg Tinkov says he wants to win all three grand tours and a monument classic in 2016 but how? The team’s got a Danish exodus led by Matti Breschel, he’s been good for a few wins and crucially one of the few riders left in support of Peter Sagan during the classics; the Slovak will arguably have less support than he did at Cannondale. There was talk Mikel Nieve to help Contador and Majka but won’t happen so they need more to turn dreams into reality.

Team Sky tend to be seen as specialists in the set-piece stage races and Chris Froome’s Tour de France win is the obvious highlight. There’s the Dauphiné, Paris-Nice, the Giro del Trentino and more as target races but they’ve won more across the board with Elia Viviani proving a judicious signing from Cannondale with a handy seven wins including three in the recent Tour of Britain. 17 wins only four teams with less, it would have sounded very disappointing for Giant-Alpecin at the start of the year. With a fully fit Marcel Kittel they’d be on, what 27 or more wins? More if Luka Mezgec was doing better too. But the 17 and everything else marks a very successful season thanks to John Degenkolb’s spring classics and Warren Barguil and Tom Dumoulin promising Tour and Vuelta rides. But promise is just that, the hope of something better in the future and confirming is big ask.

Trek Factory Racing have a conundrum, do they spend all their budget on a few big names or hire prospective talent and hope a few flowers bloom? Fabian Cancellara can deliver big but it’s been a bad year for him with crashes but there’s also a sense he’s approaching retirement which will free up a big chunk of the team’s wage bill. Niccolo Bonifazio and Edward Theuns should deliver wins in 2016, especially if Theuns sees the promotion from Topsport Vlaanderen as a stepping stone to bigger things rather than believing he’s made it by signing for a World Tour team. Kiel Reijnen is the latest in a line of US riders to make the transition from US racing to Euro racing but in recent years nobody has swapped a breakout performance in the US for big wins in Europe.

Cannondale-Garmin sit second last. They’ve been very active in the transfer market recruiting the likes of Pierre Rolland, Rigoberto Uran, Lawson Craddock… all are strong and entertaining but winners so the prospective win tally for 2016 doesn’t look too high. They will count on sprinter 25 year old sprinter Wouter Wippert for some wins but he’s not prolific, you might remember his win in the final stage of the Tour Down Under or his close calls in the Tour of California. The hope is he can improve and he at least brings sprint options which they didn’t have before and presumably comes at a keen price. Last is Lotto-Jumbo, the Dutch squad were a late save last season thanks to new sponsorship but it meant a diminished budget compared to the high-spending Rabobank days against which it’s easy to make comparisons. But it’s not just money, something’s not quite clicked either. Robert Gesink had a great Tour de France (but no wins) while house sprinter Moreno Hofland has had a lot of DNFs and just two wins thanks to injury. Sep Vanmarcke’s struggles sums up the team’s season, they can’t get a lucky break at times which is something a lottery-funded team won’t like. 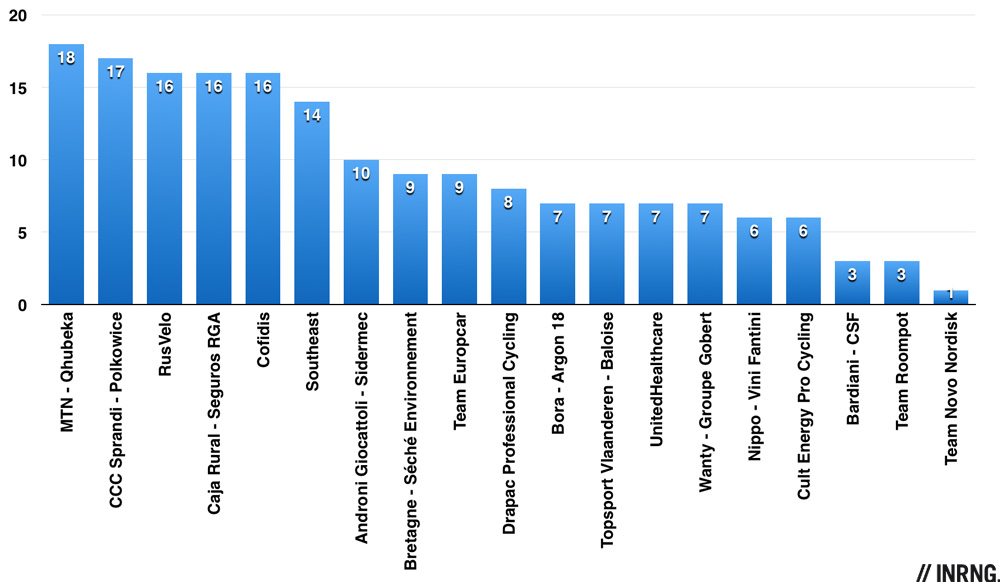 MTN-Qhubeka have 18 wins although one third of these come from national championship titles. They still count. With Mark Cavendish linked to the team it’ll be interesting to see how they handle their identity over the winter. Even if the Manxman doesn’t join they will no longer be the “first African team”. Instead they’re an established pro team and will be expected to ride like one.

CCC-Sprandi have had a good season and testimony to the resurgence of Polish cycling, a wider foundation that Michał Kwiatkowski and Rafał Majka. However second place in the table is achieved by winning smaller races like a stage win in the Tour of Croatia or the Baltyk-Karkonosze Tour. Maciej Paterski did get a stage of the Volta a Catalunya and Davide Rebellin keeps going too. If the Polish team won some lesser events, what of Rusvelo? They sit third but name one of their wins? In fact have you seen the jersey on TV? Russian readers can but otherwise this offshoot of the Russian track programme is not so famous.

Mission accomplished for Caja Rural thanks to Omar Fraile’s Vuelta mountains competition win and a regular presence in Spanish races all year. They represent a sponsor that has no interest outside of Spain but such is the calendar they must race abroad. By contrast Cofidis has operations in several countries and these pay for the team – budget €9 million – which relies on Nacer Bouhanni. He is good but underachieves and he’s been struggling to finish a grand tour for years.

Southeast are the best of the Italian teams but name a win? Not easy. Among the others Androni have resumed racing after their collective suspension. Bardiani-CSF have had a terrible season for an opportunistic team able to pounce many wins but saved by Nicola Boem’s Giro stage win.