The Moment The Race Was Won: The Giro Was there a winning moment? Alberto Contador won the 2015 Giro d’Italia after beating his rivals day after day, both out on the roads and in their minds. There were moments where he could have lost the race but these were used to muddle his rivals. Take the climb of Monte Ologno where Contador attacked not because he needed to or because there was a stage win waiting, he went because he wanted to teach Astana a lesson.

Contador wins the Giro after winning the Vuelta last year and now bids to win the Tour de France which starts in five weeks.

There are shorter routes from Sanremo to Milan. The Giro took the scenic tour and right from the start the course provoked action. Italy’s geography means the race is never more than one stage’s ride away from ambush country hills and high mountains. The first week war between Astana and Tinkoff-Saxo needed this terrain. Orica-Greenedge won the first week thanks to two stage wins and passing the maglia rosa around three riders. Davide Formolo took the thrilling stage to La Spezia, an impressive win while behind the bunch was shredded and team mate Ryder Hesjedal lost over five minutes.

The first summit finish on Abetone saw Lampre-Merida’s first stage win thanks to Jan Polanc. Alberto Contador took the overall lead after he, Fabio Aru and Richie Porte finished ahead of the rest, a scenario to be repeated with Aru aggressively sprinting as if to make a point of who was top dog. But the repeat wasn’t certain after Contador crashed the next day, a spectator with a camera lens caught Daniele Colli and a wave of riders dashed Contador onto the road. He was too injured to put on a fresh jersey on the podium. Contador was dominant. By far the best of the GC candidates in the Valdobbiadene time trial he’d been leading the race before. If the four pretenders for the win among Aru, Uran and Porte he was the obvious pick after the first week and then proved the strongest in the Alps. He cracked on the Colle delle Finestre but this probably boosted his popularity, the public prefers to know the winner has been tested and fought back. At times it seemed as if Contador was riding without a team and even Oleg Tinkov was joking that Contador alone was worth more than Astana’s nine. Contador never had that sidekick to ride shotgun in the high mountains but did get plenty of help elsewhere, see the help he got to the foot of the Mortirolo or when he launched the Verbania Vendetta attack up Monte Ologno just after Michael Rogers had stopped pulling. Even a subluxated shoulder was used to Contador’s advantage. Psychologists talk of “loss aversion” where people fear losing something rather than not having it in the first place. For example find and then lose a €100 note and you’ll end the day unhappy despite being no worse off than you were earlier, you finish the day kicking yourself about the loss. The same with Contador’s shoulder, he and his team were happy to let the story snowball into tales of a dislocated shoulder. When Contador was spotted leaving Castiglione with his arm in a sling champagne corks must have been popping in the minds of his rivals who though the biggest obstacle to victory had been removed by a banal crash. Only Contador was dashing the hopes of his rivals in days, turning an injury to him into a mental blow for others. For a moment they thought they had the edge on him then they lost it and probably ended up in a worse place than before. This didn’t win the race for him but it’s a useful case study in Contador’s total approach to grinding down his rivals. See him sprinting for time bonuses to increase his already large time gap or his attack on Monte Ologno, Philippe Gilbert won his second stage but behind Alberto Contador took off just because he wanted to make a point to Astana. 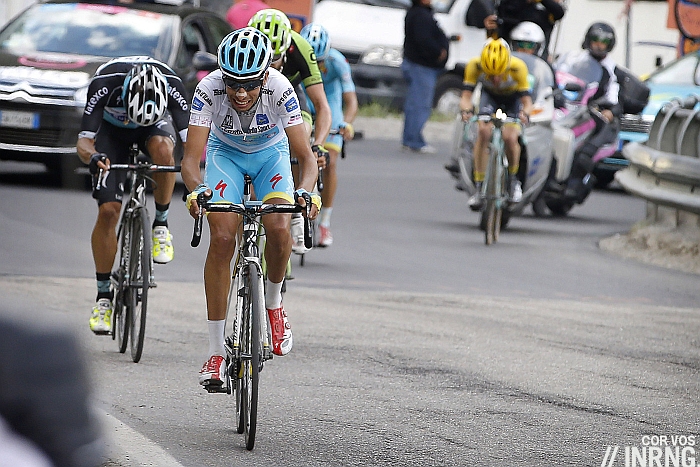 Fabio Aru lost the race but gained in popularity, barrels of paint have been consumed to paint his name on the roads. A promising support rider in 2013, an impressive stage winner in 2014, he’s now a fixture in Italian cycling although the excited mentions of his during the first half of the Giro dampened as he fell apart later on but the collapse was small, a wobble in Imola, a few seconds lost in Vicenza. Aru’s Mortirolo ride was an example, he was destroyed by Alberto Contador and left by his own team mate Landa but if he lost time on the Mortirolo he limited the damage on the road to Aprica. He’s still 24 and wins the white jersey with almost two hours over the next rider. Cohabitation on the Astana team with Vincenzo Nibali won’t be easy. Even if they were best friends – and they are not – their ambitions and race programmes are bound to overlap although for now Aru is sure to aim for the Vuelta and next year’s Giro. 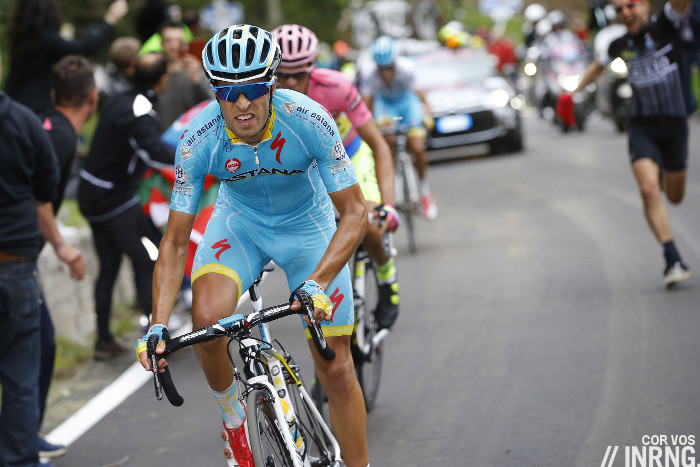 Aru had to cope with Mikel Landa’s ascending form just as his own form was coming off the boil. Some are saying Landa’s come from nowhere but he’s been rated as a top climber for years. He was just behind Nairo Quintana and Andrew Talansky as the best climber of the 2010 Tour de l’Avenir. As a neo-pro in 2011 he skewered Juan-José Cobo and Joaquim Rodriguez in the Vuelta a Burgos, a week before the Vuelta a Espana where Cobo won and Rodriguez took two mountain stages. Loyal readers will remember he was this blog’s number one pick to replace Spain’s ageing “musketeers”. None of this is proof of a pure diet and bread and water either, just that he’s been tipped for the top for years. Landa bombed in the time trial but seeing him being caught by Contador and then limit his losses suggests he just needs practice.

Astana took five stages but remember this is a partly an Italian team funded by Kazakh money so they’ve been excited by the domestic aspect. It’s one thing to boss the Giro’s relatively weak field, it’s another to do it in the Tour. Tinkoff-Saxo will have a much stronger team with Rafał Majka and Jesus Hernandez while Sky will show up with Nicolas Roche and Geraint Thomas although Vincenzo Nibali with Jacob Fuglsang will be there. What next for Rigoberto Uran? If things go his way he make the top-5 in the Giro and Vuelta every year which is valuable but climbing higher seems difficult. It’s lucrative niche to fill but one that attracts lesser teams keen to win points rather than Etixx-Quickstep which wants to be seen one of the best teams. Richie Porte had the worst time of all the contenders. There was that puncture and the time penalty but his crash in Jesolo made all the debate about UCI rules academic as he lost yet more time and got injured. To leave a race that was his big goal of the season because of a crash was terrible. But as the failure was rooted in bad luck rather than proof – if one grand tour is enough – that he can’t win a grand tour and it keeps the flame burning for another tilt just when his contract is up. But he needs to work on his public image, L’Equipe’s Philippe Brunel was virulent in his criticism of Porte in two articles, excessively so perhaps but the kernels of truth were that for all of Sky’s spending on helicopters and motorhomes they lost two minutes because their leader didn’t know the basic rules that are free to download; and Porte often vanished after every stage rather than meeting and greeting the media so the public never warmed to him, he was the foreigner who rejected the race hotels to some. 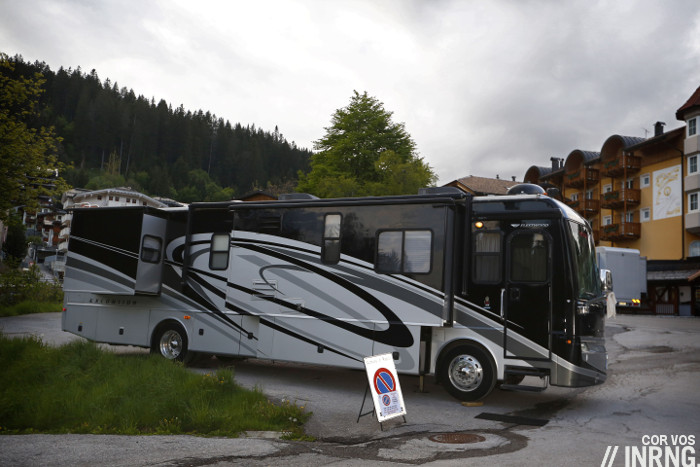 The motorhome is a good idea on paper. Recovery during a stage race is dependent on nutrition, rest and sleep and being able to improve the last factor can bring enormous gains. Especially in a three week contest where the hotels vary. But it was taken the wrong way by some, as if Sky wanted to insulate their rider from the Giro’s travelling caravan. At least ASO and the French press are warned if the vehicle shows up at the Dauphiné and Tour de France.

Among the contenders that’s about it. Before the race the field looked shallow with four obvious picks for the podium and Domenico Pozzovivo. Now the race is done glance at the top-10 overall it’s more Lieutenant Classification than General Classification, a list of luxury sidekicks gregarios rather than champions and stars in the making. Take Movistar where the likes of Ion Izaguirre, Jesus Herrada and Beñat Inxausti looked good for stage wins; Inxausti delivered but the big surprise was Andrey Amador who had looked set to shield the others from the wind on the flatter stages but his consistent riding put him high on GC. All good but can he return in 2016 to win or is he really an ideal lieutenant for Nairo Quintana? Another telling factor was the time gaps, only 18 riders finish within an hour of Alberto Contador and if there a few close examples along the way you have to go back to the 1950s to find so few riders within an hour of of the first rider illustrating just how hard the race was and suggesting a wide variance in the level of the riders concerned. Beyond the GC Lampre-Merida were big winners with four stage wins. In the Tour de they’ve often been one of the most invisible squads, the kind you almost forget are there but the Giro is their home race and it worked out bettter. For the Giro this year FDJ weren’t so visible although Alex Geniez was huffing and puffing his 72kg carcass over the mountains. But the invisibility cloak was shared by Southeast and CCC-Sprandi who barely made the breakaways. They can take some comfort in the domination of a few teams, of the 22 teams in the race less than half won a stage. Bardiani-CSF were the only wildcard team to win a stage thanks to Nicola Boem but they’ve got some explaining to do in front of the MPCC in the coming days. The Verdict
A thrilling race with action from the start to finish enabled by a good course and two teams who started the “fight for pink” early. If there was a DVD of the highlights it would need to be a box set. Alberto Contador was already in control by the stage to Aprica but this day demonstrated his grip on the race whether physiological with the speed of his ascent of the Mortirolo or psychological for the way he turned a disadvantageous injury into a mental win over his rivals.

As good as the match was it was the equivalent of watching a B-movie. Beyond Contador there were no superstar challengers. This was a race that began with supporting actors like Uran, Porte and Aru as GC rivals and when two of these fell away the cast looked even weaker. Contador hadn’t even finished the race before talk turned to the Tour de France. July will have a cast of stars but will the drama be as good?