“What are those black things under the saddle?” is the most frequently asked question from readers and Twitter followers this week. Riders in the Critérium du Dauphiné have a small black stick poking out of the back of the saddle. Look and you can see them in the image above. It’s for beaming data, it’s on trial this week before an expected launch in the Tour de France. 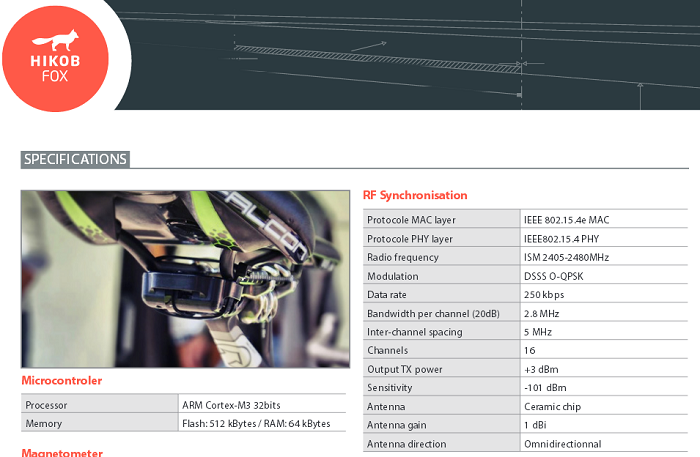 It’s called the “Fox”, or at least this has been the name given to the device used in trials for Project Smacs, the name given to the trials. The Fox is produced by a HiKoB, a company from Lyon in France that does a range of wireless monitoring, click here for the full spec of the product (PDF). The Fox can incorporate an accelerometer, a gyrometer and atmospheric pressure monitor but none of these are much use for cycling, the real interest surely comes from location tracking via GPS and RF where the signals from the bikes are relayed to vehicles in the race convoy and on then the signal is boosted onwards for TV production. It promises “ultra low power measurement and communication protocols: +8 hours of autonomy at full usage (50 Hz sampling rate)” which is essential for a bike race. As you can see in the image above showing the spec in 2014 it’s different in appearance and fixation to the version in use this week, pictured below, perhaps 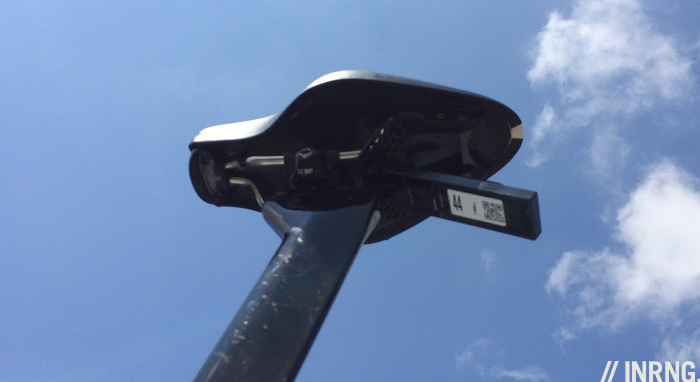 The stick version of the Fox is made out of plastic and encases a GPS chip and wireless transmission technology. All the units have a bar code underneath which can be scanned as well as a number which corresponds with the rider’s race number and there’s also a small port. It’s attached to the seat rails with zip ties which explains the varying angles as the poke backwards.

The company behind this, HiKoB, specialises in wireless data transmission. They can, say, equip a road bridge with wireless sensors to measure load in different points of the structure throughout the day. More relevantly for sport they offer live coverage via tracking of athletes. Their website shows they equipped ex-cyclist Laurent Jalabert with sensors for the 2012 Paris-Marathon to measure his heart rate and the number of steps along the course.

More recently the system was tested in Paris-Tours in 2013 and now it’s being used in the Critérium du Dauphiné this as a trial run before plans for a full launched at the Tour de France. It’s all for Euromedia, the television production company behind the images of the Dauphiné you’re watching this week and who produce the Tour de France. However the sticking point is that not all teams have embraced it, for now only the non-Velon members are adopting it, presumably the Velon members (BMC Racing Team, Etixx-QuickStep, Lampre-Merida, Lotto Soudal, Orica-Greenedge, Cannondale-Garmin, Giant-Alpecin, Lotto-Jumbo, Team Sky, Tinkoff-Saxo and Trek Factory Racing) are holding out for some type of cash payment. What to expect? For years time gaps in races would be done by a motorbike with a pillion passenger carrying a blackboard to inform the riders. Today on TV we have GPS time gaps but the signal for these is usually taken from motorbikes following the race so dependent on the position and proximity of each moto to a group on the road. From what I understand it allows riders to be tracked in real time and the output gets displayed on a map with the riders. If you’ve seen flight tracking applications this is similar. It opens up many possibilities, first the instant ability to know who is in the breakaway rather than wait for images of riders and their race numbers; although it’s not foolproof if a rider changes bikes or the transmitter fails. Being able to know exactly where a rider is could be fascinating, both in real time to see who is at the front of the peloton when a race starts a mountain pass and who is at the back. Or imagine a sprint finish played out in slow motion via data graphics so you can see the winning rider’s path through the peloton for the last five kilometres. Once we know where two riders are we can time them, so we could have instant info on where a rider is on, say, Alpe d’Huez and their time gap to the yellow jersey or a realtime “virtual yellow jersey” during a time trial.

With such rich data it’s up to the producer or possibly even the viewer/user to find what is valuable but it’s promising and about time.