A team time trial and three races in one. First to win the stage, second to place GC riders in position and third a dress rehearsal ahead of the Tour de France and its own 28km time trial. Stage 2 Wrap: Daniel Teklahaimanot went clear from the start with Europcar’s Pierrig Quéméneur and FDJ’s Arnaud Courteille, fresh enough despite the Giro in his legs allowing the Eritrean to take maximum points. However the bunch kept the trio on a leash with Cofidis and Sky doing the early work before Giant-Alpecin and Lampre-Merida agreed to join in. At one point the leaders were going to be caught so the peloton eased off, the idea is to leave them out there so that if anyone dares to attack out of the bunch they’ll have to bridge across to the breakaway and then find three riders eager to sit on their wheel and spoil things. Inevitably we got a bunch sprint and Cofidis barged their way through the field to launch Nacer Bouhanni. There was a headwind but it just served to make life even harder for the fatigued Sacha Modolo.

The Route: the race starts on the edge of the city of Roanne and crosses the Loire river to head out into the countryside and starts climbing gradually at 2.3%. The top of the first climb sees a left turn and then a rough country lane north and the race descends to Perreux and the first time check.

The route then heads east up a long dragging road for the final 10km climbing steadily from the 6km to go point before dropping to take the bypass road around Montagny before circling back to finish uphill in the tiny town. It’s uphill but just, a couple of clicks of a gear’s difference but this could be the undoing of some. The Contenders: Team Sky are the logical pick. They come with a very strong team including engines like Ian Stannard and Luke Rowe and have the twin goal of protecting Peter Kennaugh’s yellow jersey and putting Chris Froome ahead of his GC rivals.

Astana will be worth watching because they can win and to see how Vincenzo Nibali and his team collaborate with a view to the Tour de France TTT stage. Lars Boom, Andriy Grivko and Rein Taaramäe can help drive the team.

Movistar are contenders for the win with TT specialists Alex Dowsett and Jonathan Castroviejo helping to drive the team to support Alejandro Valverde. There’s a degree of uncertainty here because Beñat Intxausti could help but may be tired from the Giro for such a sharp effort.

Etixx-Quickstep have a powerful squad with Tony Martin who is always worth two riders. Niki Terpsta and Stijn Vandenbergh know how to roll.

BMC Racing have a very strong squad to support Tejay van Garderen with Daniel Oss, Manuel Quinziato, Rohan Dennis and Michael Schär to drive things. They’re the world team time trial champions, an odd concept given the whole squad that won the title could have quit or retired but in this case four of the six winning riders from Ponferrada are here. Orica-Greenedge are specialists at this kind of effort but this isn’t the team that pushed Sky so close in Romandie, then they had Svein Tuft, Brett Lancaster and Michael Hepburn, now the only TT specialist today is Damien Howson, a good engine but the squad doesn’t look like a team pursuit replica. A similar story for Katusha who don’t have all their usual locomotive riders to power the team. Bora-Argon 18 could be the surprise, it’s hard to imagine them winning but with powerful riders like Jan Barta and Bartosz Huzarski they’ll hope to beat a few of the big teams.

Finally watch the other teams to see how they fare. Ag2r La Mondiale in particular need to improve in order to support Romain Bardet and J-C Péraud.

Weather: sunshine and clouds, warming up to 24°C with a 15-20km/h breeze from the north, just enough to make teams fan out diagonally as they ride from the time check to the finish. 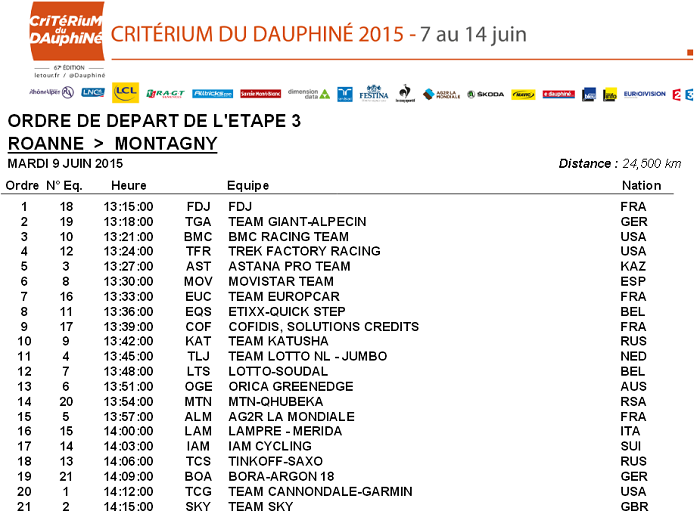 TV: the local start times are above and the course will take under 30 minutes for the best teams meaning the finish is forecast for around 2.15pm CET.