The Moment The Race Was Won – Flèche Wallonne Alejandro Valverde sprints clear in the final straight to win the Flèche Wallonne. An obvious scenario but plenty happened before with numerous crashes. It promises a very nervous Stage 3 of the Tour de France.

As usual an early breakaway but no riders of serious consequence. It took a while to reel them all in even while they were bickering and attacking each other. The race behind was on with crashes as riders fought for position. Tejay van Garderen tried a move over the Côte d’Ereffe and why not? He’s a steady rider rather than the springy type for the finish and was one of the few BMC riders to stay upright. Near the finish we got another Vincenzo Nibali attack and again it was more show than go. As stated in the preview the new Côte de Cherave climb is wide and straight, hardly a launchpad and so any attack is pointless. You can view Nibali’s move generously as a leg-stretcher but otherwise it was a big waste of energy that cost him on the Mur de Huy.

Over the top and Tim Wellens took a lull to jump away, this was able to stick for longer than Nibali’s move, if only because nobody can afford to let Nibali go. But Wellens was always going to be pulled back, the effort needed to go clear and preserve a lead meant he arrived the foot of the Mur de Huy cooked. After the bunch reeled in Wellens Valverde hit the front, not sprinting but just matching everyone else and ensuring nobody could block his path. This time there were no foolhardy attacks with 500m to go, the bunch was huddled but don’t confuse this with riders sitting tight, everyone was surely on the limit. As the finish came into sight the sprint got going with a charge by Orica-Greenedge’s Michael Albasini – in form for his Tour de Romandie – but Valverde wouldn’t let anyone pass and accelerated in the final metres. The Verdict: the addition of the Côte de Cherave helped liven up the finish but this remains a race where hours of live coverage bring nothing except crashes and doomed breakaway bids. You can tune in for the final 10 minutes and miss nothing meaningful and then watch things unfold with almost no tactical sophistication and the TV cameras don’t do a great job of conveying the gradient. The linear way the riders went up the final climb made the finish even less exciting, there were no spectacular implosions with riders surging and fading.

Valverde was the prime pick in the preview to win the race but he’s never a first choice winner for many, his cries of “injustice” when the Italian Olympic Authority (CONI) succesfully banned him for his involvement in Operation Puerto still echo no matter how elegant he can be at times on the bike. He joins the club of three winners with Marcel Kint (1943-45), Eddy Merckx (1967, 1970, 1972), Moreno Argentin (1990,1991, 1994) and Davide Rebellin (2004, 2007, 2009). There’s room for a fourth but he turns 35 on Saturday as as much as his team will delight in the win he’s secondary to Nairo Quintana’s ambitions now. The Colombian finished 76th today. Another winner was the Côte de Cherave which proved a successful addition, thinning the field down and adding some more spice to the finish. It left the main contenders in place but got rid of many of their team mates. All day the likes of Katusha, Movistar and Team Sky had been working but after Cherave the big names didn’t have much support left.

La Flesh Wound: the race was marked by several crashes: 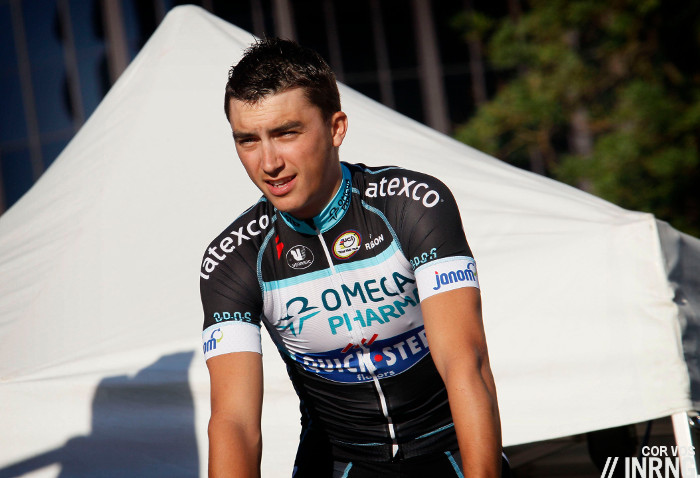 Second place went to 22 year old Julian Alaphillipe of Etixx-Quick Step. A second-year pro he came to the fore last year finishing third, fourth and second on the flatter stages of the Volta a Catalunya. A sprinter? No, he won a summit finish stage of the 2013 Tour de l’Avenir. He’s a punchy finisseur and was fifth in the GP Plouay last year too, proof he can handle the distance of a World Tour race. He’s been training for the Ardennes races with 300km/8hour rides around his home town of Montluçon, a dull place in central French which is also home to Roger Walkowiak. Today Alaphilippe called second place “a defeat”, fighting talk when so many compatriots announce bland ambitions of a top-10 in the Ardennaises. Project (to) July: if today was a crash-fest imagine what it’ll be like in July with more riders, an extra man per team and the added pressure. They’ll be a yellow jersey to defend, GC candidates to place at the front out of trouble, riders scrapping for the stage win plus a peppering of have-a-go heroes risking it all for little more than 15 seconds of TV air time. If the Côte de Cherave dropped many today then it’ll leave plenty floundering July and if anyone is distanced on this climb they risk losing more time on the descent and then the Mur de Huy. One mistake or one crash and someone can lose a minute or more. Today Chris Froome finished 123rd and 12 minutes down, not the kind of recon experience he wanted.