The Moment The Race Was Won: Tirreno-Adriatico Nairo Quintana rides solo on the way to the Monte Terminillo, the “fantastic four” reduced to one. This was the moment the race was won.

The race opened with a prologue instead of the promised team time trial because of the ravages of a storm. Adriano Malori won. Malori means illnesses in Italian but hopefully he’s got a healthy future. The Movistar exile is a time trial expert and, with Tom Dumoulin, one of the few riders to threaten Tony Martin’s hegemony. Five riders finished within three seconds. Come the final stage, more a test of raw power than handling skills, and Fabian Cancellara was on top. Cancellara’s become a creature of habit and winning the Tirreno-Adriatico time trial usually presages classics podiums.

Stage 2 ended in a bunch sprint and a big crash. Jens Debusschere won twice, first with the victory celebration and the second time with his post race quotes which expressed humility, he knew he’d not beaten the whole field b. The next day Greg Van Avermaet won in Arezzo. Finally. As quipped on Twitter, what would happen if GVA and J-J Rojas arrived alone as a duo in the finishing straight is the stuff of philosophy. Van Avermaet won the same day as his lawyer was attending an anti-doping hearing. Headlines concentrate on “Ozone Doctor” but the case reportedly involves infusing a medical product for infants called Vaminolact. If anything it’s embarrassing, getting baby drugs from a quack doctor rather than just having a glass of milk or a recovery shake.

Wout Poels took a crafty stage win to the delight of Etixx-Quickstep sponsor Marc Coucke, although he was soon informed that Poels had left his team for Sky over the winter. The switch showed with Poels was described in L’Equipe as “anorexique“. Ironically his win owed plenty to descending skills. Everything built to the weekend showdown on Monte Terminillo. There’s no accident the best stages were reserved for the weekend, they guarantee a TV audience boost and the race got 1.7 million viewers in Italy or 9%, a respectable score for Italy. The fear was the climb was too predictable to provide action but riders responded and the weather made things more dramatic. Quintana accelerated twice, one to test his rivals and the other to ride away for good. He came into the race as the unknown quantity and left ahead of the rest. As a climber he had only one real test to pass this week, it’s worked. Scanning his the bookmakers ds for July – a long way away – he’s been on decimal odds of 3.58 across the market for a while and his win has only tightened things to 3.47. Quintana talks in the same way as he pedals. On the bike Quintana seems perpetually in one bigger gear than his rivals. The legs turn slower, a forceful style. It’s the same manner in a Quintana press conference, the words flow slower but with an assured and deliberate manner. Vincenzo Nibali came up short, predictable after he was seen floundering on the Strade Bianche. Last year he was discreet in Paris-Nice so perhaps there’s nothing to worry about, besides Alexandr Vinokourov is probably too busy trying to save the whole team rather than write angry letters but all the same sponsors and Italian fans alike would have preferred to see a peak of form rather than a trough, he didn’t seem happy and avoided the media at times, presumably to duck questions about the team’s licence, about which he knows as much as you and I. The UCI has given the team until 20 March to get their files ready for a pending licence hearing and RCS race director Mauro Vegni says Brian Cookson has assured him the whole matter will be settled, even any CAS appeal, by May.

Alberto Contador was solid. There’s talk of a training accident before the race but was just heavily marked when he chased Quintana. In the words of Thibaut Pinot the Spaniard had only to “lift his rear off the saddle for everyone to throw themselves on his wheel“. Losing a race or two this year helps deflate his status a touch so that the next time everyone won’t look to him to do everything.

Pinot had a very good race. His chase efforts were like Contador’s he met a headwind up front and a queue of riders behind. The Frenchman can play the anarchist sometimes but this has been a solid week, he’s got a team around him and increasingly has the focus to stay out of trouble on the banal stages. He even made the top-20 on the final stage, finishing ahead of specialists like Matthias Brändle and Luke Durbridge. 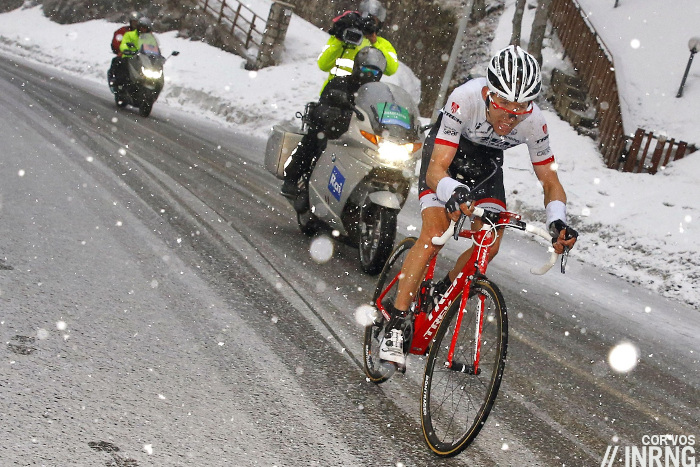 Bauke Mollema had a great time but we’ll want to see him repeat soon to confirm the result. You sense that he was allowed to get away because he’s Bauke not Alberto, the others were content to let him go potato-hunting. Their mistake and he climbed onto the podium. It’s a great result and it’ll be fascinating to see what he does in the coming weeks and there’s room to improve longer term too, his “nodding dog” time trial action needs to be sorted. Adam Yates was very impressive, there’d been talk of Richie Porte becoming Orica-Greenedge’s GC rider but Yates looks like he’s got more potential. Peter Sagan’s win matters. People have been counting the days, weeks and months since his last win. Anecdotal? Of course but telling because he’s been a rider capable of winning on varied terrain and therefore a rider who should be winning so much. One win is good enough to shorten his odds for Sanremo.

Classics Prep
Those who went to Italy in search of better weather made the wrong choice this year. Compared to Paris-Nice the stages were faster, the stages were longer and it’ll give some the workout they crave. It’s all in the details, if it was colder did they dress for success during the day and then wrap up the moment they crossed the line? There’s been a polemico about the snow on Monte Terminillo with some riders quick to criticise the race organiser. The experience varies, Pinot said he enjoyed riding with bare arms because it gives him a look of “a warrior” for the photos but for most it was more polar conditions than Polaroid moment. The first got to the finish with relatively clear roads but the gruppetti had to endure it for 20-30 minutes more by which time the roads had become very slippery and even team cars were slithering across the strada bianca. The Verdict
An enjoyable edition with varied geography and a big cast of actors, the race is evolving into a mini-Giro. If the route could be drawn with a mouse or paintbrush, an added uphill finish with a short and steep ramp, Montelupone style, would have been even better.

Billed as the first clash of “the fantastic four” the race showed cycling is complex contest and attempts to reduce to simple labels are fun marketing but sport throws up surprises. Nairo Quintana came into the race as the unknown quantity and leaves with the giant trident, one pointy tip for each of the three rivals he’s planning to skewer in July. Bauke Mollema had a great performance, confirming this with more results is the next test. Thibaut Pinot wore the white jersey for the best young rider but only because he was keeping it warm for Quintana who is four months older than him.

Milan-Sanremo looms large. Vincenzo Nibali says he won’t ride, the absence of the Le Manie climb doesn’t help him but it wouldn’t be any good if they put it back on the route and added Pompeiana too because his form’s off. It means a race tilted to the sprinters but others like Fabian Cancellara are waiting to spoil their day.

Next post: Coppi, Coffee, The Past and The Present