Coppi, Coffee, The Past and The Present 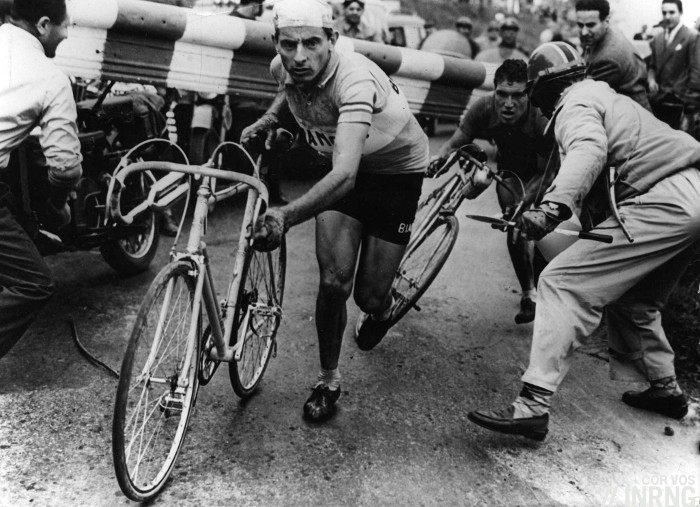 As races go Milan-Sanremo has created many legends and myths. Eugène Christophe’s win in 1910 came after 185 riders abandoned before the race had even started, so grim were the conditions. There’s the emergence of Eddy Merckx who won the race for the first time aged 20. Sean Kelly’s descent off the Poggio rates as a classic. There are far too many moments to list. So let’s take 1946 and the story of Fausto Coppi and his coffee break.

The 1946 edition of Milan-Sanremo is much like the others, a ride from Milan to Sanremo. Back then the organisers didn’t need to deviate the route to include extra climbs like the Poggio and Cipressa because the 290km route was hard enough. Life was hard too, this was post-War Italy in reconstruction mode but to re-build meant to unite and Italy wasn’t there yet. Elections loomed, the country was split between left and right, women were allowed to vote for the first time and the country decided to abandon monarchy.

Milan-Sanremo was a reconstruction project too. It resumed after two year interlude for war. Far from the story of national unity this was the story of one man: Fausto Coppi. Legend has it that once he escaped in a race he was never, ever seen again until the finish line. An exaggeration? Maybe but the 1946 Milan-Sanremo is instructive because Coppi took flight on the Turchino Pass and was never seen again by his rivals until they reached the finish. Coppi was 30 seconds ahead at the pass, he had five minutes by the time his chasers reached Volti and he doubled that by the time he reached Sanremo. It was classic Coppi, a long range solo effort saw him win the race with apparent ease.

Make it an espresso

In fact he was so far ahead of his rivals he stopped for coffee along the way. The venue is the Caffè Pasticceria Piccardo in Oneglia, it’s still doing good business today. In 1946 it was a warm spring day and for reasons unknown as he spun along the Via Aurelia coastal road Coppi fancied a coffee. Remember this was in a day with no race radios, in fact even live radio coverage was primitive, information was scarce. Still Coppi knew he was so far ahead he could stop. Not that he kicked back and slowly sipped his cup. Accounts vary, some say he slowed and was handed a cup, others say he actually stopped for a moment. What is agreed is that he consumed a coffee from the Caffè Piccardo. Of he went to Sanremo and he crossed the line with such an advance on his rivals that the radio commentator for the race cheered Coppi’s triumph and then said “we’re going to play some dance music” and duly aired a ballroom dance record to fill the time until the others arrived 14 minutes later.

“When Fausto won and you wanted to check the time gap to the man in second place, you didn’t need a Swiss stopwatch. The bell of the church clock tower would do the job just as well. Paris–Roubaix? Milan – San Remo? Lombardy? We’re talking 10 minutes to a quarter of an hour. That’s how Fausto Coppi was”
– Raphaël Géminiani, CycleSport Magazine, 1996

Géminiani gives good quotes, prone to exaggeration, but the original Rapha makes the point that Coppi was so far ahead of the others. Today we venerate this, a utter triumph where the post-race podium was, figuratively, disproportionate with the winner towering above the rest, the mythos of the champion. It sounds great.

Or does it? Imagine if a rider was so far ahead come Sunday’s Milan-Sanremo: it would be boring, you’d know the result long before the finish. If the lone leader stopped for a coffee today corners of social media and forums would erupt with conspiracy theories about trying to mask or flush a secret potion.

It illustrates how the sport has changed. The race still goes from Milan to Sanremo albeit switching inland for two climbs but the big difference is the way we consume the sport. No longer is there a live radio coverage and newspaper reports, it’s all on TV and to a lesser extent, the web and social media. It’s instant and some complain if their feed has a 30 second delay in case Tweets appear in their time line announcing events that occur on their TV screen in ten seconds. Still for most of the audience the race is about the action on-screen and it explains why the race has used more and more climbs as a means to spice up the finish of the race and why RCS are planning to use the road to Pompeiana in future years in order to break things up even more.

This weekend’s Milan-Sanremo is so tantalising because it’s so open, it’s the longest race of the year but often decided by the smallest of margins. It’s race that builds in tension like no other. By the time the race reaches Oneglia even fans daren’t step to the kitchen for a coffee in case they miss something.

Note: that’s a generic photo of Fausto Coppi at the top and probably not from the 1946 Milan-Sanremo.

Previous post: The Moment The Race Was Won: Tirreno-Adriatico