José Joaquín Rojas celebrates but it’s Movistar’s jefe Alejandro Valverde who wins the stage in the Volta a Catalunya, collecting the helpful 10 second time bonus. Valverde is no stranger to winning, in his early years he was called El Imbatido, the unbeaten one. Rojas by contrast is admired and even mocked for finishing fourth so often. Is it true he’s the king of fourth place, the chocolate medallist specialist?

It’s true, Rojas is Señor Cuarto. So far in his 11 year career he has finished in the top-10 of a race 258 times with nine wins but 43 fourth places. The chart above ignores team time trials and only counts actual placings, it strips out aggregate results like 4th overall in a stage race or 6th in the points competition: only the finishing position in a stage or one day race that is counted. The Spaniards say the fourth placed finisher gets the medalla de chocolate, the chocolate medal after gold, silver and bronze.

Start as you mean go on: Rojas’s first race as a pro was the Vuelta a Extremadura. Riding as a stagiaire for the dodgy Liberty Seguros team he was second on the opening day, fourth on Stage 2, second again on Stages 3 and 4 and finished the race second overall.

Worth his weight in points: The wins are rare but he can rack up the points thanks to the consistency and currently sits 43rd on the UCI World Tour rankings. Movistar have little to fear when it comes to relegation from the World Tour but he’s a valuable prospect for any team looking over their shoulder.

Frustration? In a recent interview with ciclismoafondo Rojas was asked if he despairs at all the second places? “No, never. I am the most stubborn person in the world” he replied.

Spanish sprinter: an oxymoron? Rojas is the latest in a line of Spaniards who can finish fast but climb too, think Miguel Poblet or Óscar Freire and see team mate Juan José Lobato. Coincidence? No, many races on the Spanish amateur calendar have a hill to climb and in order to rise up the ranks a rider has to be able to rise up the hills too. An 80kg hulk in a Spanish not going to harvest the same results they’d get if they lived in the Netherlands.

There’s variation within this category. Rojas is more than a fast finisher, he’s able to work for Valverde and Nairo Quintana in the mountains and told ciclismoafondo that Lobato is more of pure sprinter. 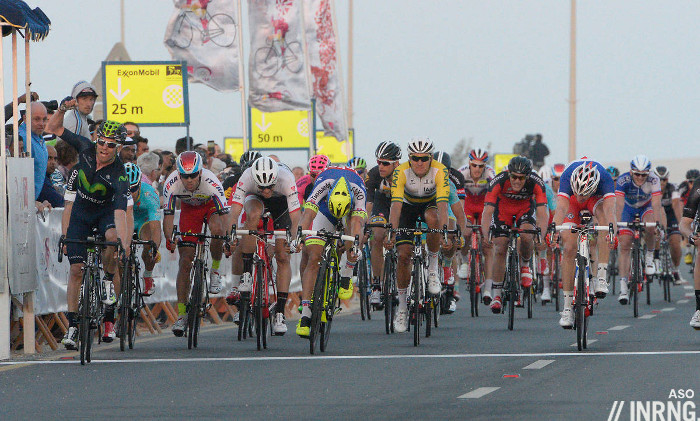 The Wins: he’s averaging less than one win a year. Here they are:

If he’s so regular why doesn’t he win more points jerseys? It’s a strange one. He’s only ever won one points jersey competition, the Tour of Poland in 2007 and took the mountains jersey in the 2006 Tirreno-Adriatico too. Fittingly he’s been runner-up and placed, for example second in the 2011 Tour de France points competition behind Mark Cavendish, fourth in the same competition in 2009.

Summary
I wanted to see of the Mr Fourth Place label was true and it is, he’s a regular in the top-10 but the distribution is skewed towards fourth place with strong consistency. It’s tempting to mock this, to diagnose a case of bathmophobia or fear of stepping onto the podium but his record is impressive. He’s only 29 there must be more fourth places to come.

Besides he is more than Mr Fourth Place and if Nairo Quintana triumphs in the Tour this summer it’s likely that Rojas will have played a big part, whether shepherding him on the opening stages or doing work in the mountains. If so, Rojas will stand on the top step for a change.