Despite the promised CIRC-us on Monday there’s some sport to be had on the roads and we’re due a stressful sprint finish. Alexander Kristoff and John Degenkolb are the big names but there’s a nervous duo of Arnaud Démare and Nacer Bouhanni each looking for their first win.

Prologue Wrap
A win for Michał Kwiatkowski, pipping Rohan Dennis by 31 hundredths of a second, in distance terms the Pole finished four metres ahead of the Australian. Dennis was the surprise, smashing the previous best time of Tiago Machado by 20 seconds and keeping the hot seat warm for a long time. The contest between both this week will be interesting. Kwiatkowski looks very lean which suggests he’s got his climbing legs too while Dennis is BMC Racing’s best rider overall so will get some protection and doesn’t have to yield to Tejay van Garderen… yet.

As pointed out on Twitter Tony Martin has only ever won one prologue but this route seemed ideal with the rural route rather than a twisty urban route. Alas he was only third. L-L Sanchez was a surprise fourth and will be one to watch in the coming days. John Degenkolb and Michael Matthews both did excellent rides, 10 and 12 seconds off Kwiatkowski, putting them in line for the yellow jersey in the coming days via sprint bonuses while other sprinters suffered, Nacer Bouhanni lost over a minute. Talking of time losses, Fabio Aru was 81st and Rafał Majka 94th. It’s not game over but they’re on the back foot already. The Course: very similar to the 2010 stage from the Yveslines to Contres. The route heads south across the Sologne, one marshland and now famous for hunting. It’s all flat. There’s an intermediate sprint just 11km from the finish.

The Finish: the race comes into the town of Contres with only two roundabouts in the final 5km before a sweeping right hander to reach the finishing straight, over a kilometre long.

Scenario: expect an early break to go packed with wildcard chancers. Etixx-Quickstep will be keen to protect the yellow jersey and will set to work on the front of the bunch until the sprinters’ teams take over, several squads will back their riders for the finish. It leads to an inevitable bunch sprint although there’s never certainty. One dilemma: do sprinters go for the time 3-2-1 second time bonuses at the sprint with 11km to go? A late charge costs energy for modest gains although every second helps John Degenkolb and Michael Matthews get closer to yellow. 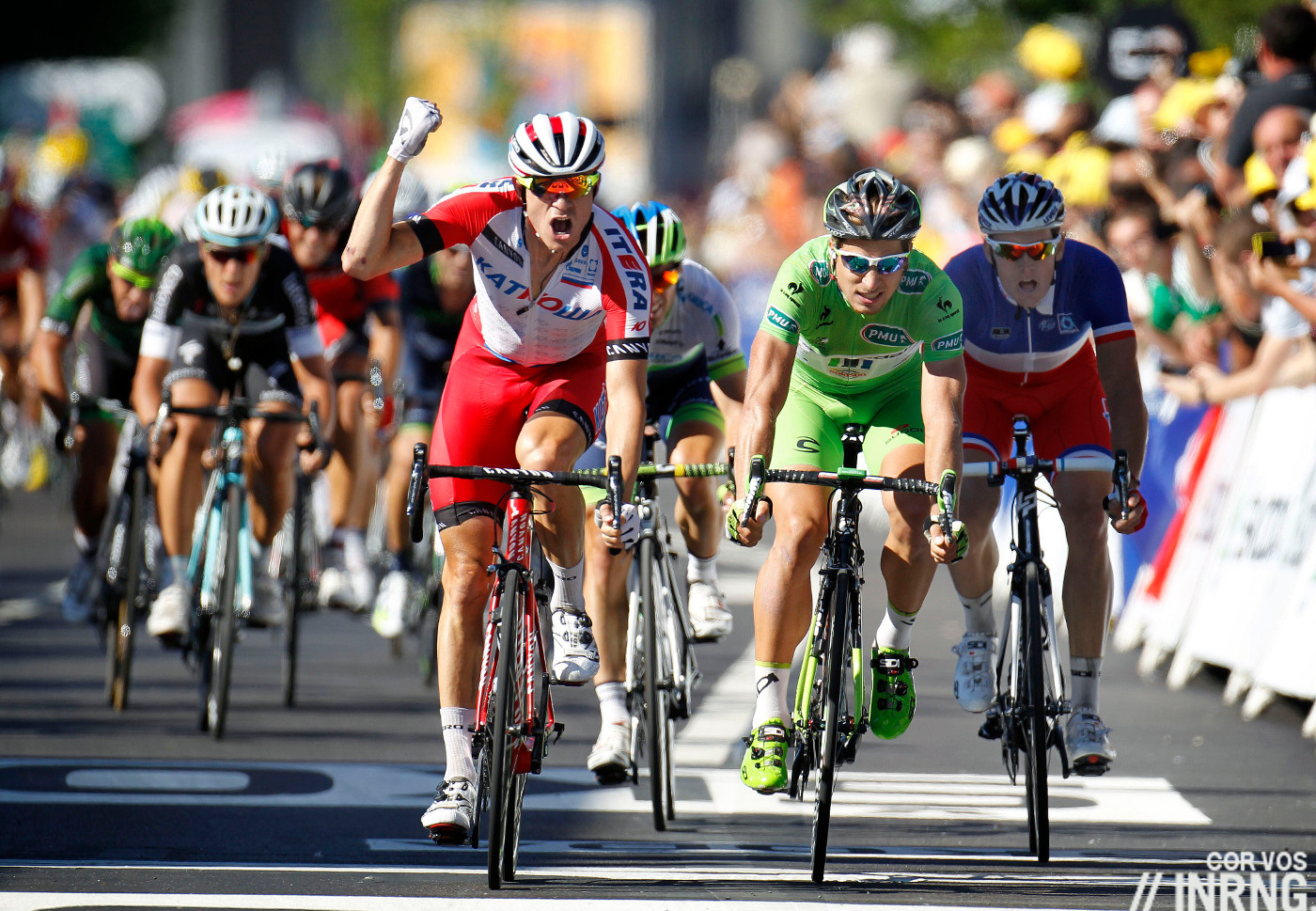 Contenders: Going by past form Alexander Kristoff is the pick. Beaten last weekend in Kuurne by Mark Cavendish, the Norwegian gets a run to the line without Cav to worry about. But is he still on the boil after such great form so far this season? John Degenkolb is the next pick, in form thanks to his great prologue and a formidable sprinter in the bunch; he’s 10 seconds down on GC but to be precise, 10.69 seconds so if he wins the stage Kwiatkowski stays in yellow, “Dege” needs the intermediate sprint.

André Greipel still has what it takes, winning in the Algarve recently but he’s been sick last weekend. A prologue ride to 126th place suggests he’s not crawling so we’ll see.

FDJ are getting nervous as they haven’t won a race so far this year and you have to go back to 2001 to find such a poor start. If they keep their cool they can deliver Arnaud Démare who will enjoy the long finishing straight as it means he can deploy his long range sprint. He’s come close this year and now has fewer opponents to worry about. D-day for Cofidis and Nacer Bouhanni‘s sprint train too: it hasn’t worked so far and until now it’s all been deflected by talk of things coming good for Paris-Nice. He had a stinker yesterday finishing fourth last, so far off the pace you wonder if he was cruising to stay fresh for his first sprint? Completing the trio of Frenchmen is Bryan Coquard, the “Mosquito” is an agile sprinter who prefers hillier routes and harder finishes.

Moreno Hofland would have been a sure-fire pick a year ago – he won Stage 2 in 2014 – but injuries mean he’s still fighting his way back. Giacomo Nizzolo kept being beaten by Bouhanni in last year’s Giro and is a regular top-3 sprinter but with few wins to his name. He’s got more help this year because Trek have hired Marco Coledan and Gert Steegmans.

Will Tom Boonen sprint? He was running close in the Gulf “training” races and could fancy a go otherwise he’ll be on duty to help Julian Alaphilippe, not a pure sprinter either but fast. Bretagne-Séché might send someone up the road for the sake of it but now have a sprint option with Yauhueni Hutarovich and the “Minsk missile” is best suited to courses without so much as a canal bridge to complicate them.

Finally three riders who would prefer a hilly stage and a sprint from 40 riders. Michael Matthews is in great shape but has he got the power for a pure bunch sprint? His wins in the Giro and Vuelta last year were uphill kicks. A win against the opposition here looks hard but top-5 is possible. Lampre-Merida bring Niccolo Bonifazio, a recent winner of the GP Lugano and he packs a good sprint but this drag strip finish isn’t ideal. Another rider who likes a hillier finish is Ben Swift: is he on team duty or will he be risking it in the sprint?

Weather: sunshine and hazy skies with a top temperature of 14°C and almost no wind to speak of.

TV: live from 2.00pm Euro time with the finish expected for 3.50pm. Tune in around 3.00pm to watch the sprint trains gather pace, Paris-Nice is a stressful race and the opening road stage means plenty is at stake.

That’s Paris-Nice: it would nice of people could pronounce the name of the reigning World Champion and race leader properly. Too often it’s Kia-tao-ski but here is how to say it right in four easy syllables: