A day for the sprinters? There’s a tricky climb with 10% slopes just before the finish. After yesterday’s maxi-crash many riders are left licking their wounds and this could be a more open stage but Movistar and Giant-Alpecin have every reason to try for they stage win they expected yesterday.

Stage 1a Wrap
A surprise result with Pim Ligthart winning. He’s already won the French opener with a long sprint, this time a late attack saw him jump with 1.7km to go. No sooner did he go clear than a Lotto-Soudal team mate went off the front of the group too, not in pursuit but to ensure any counter-attacks would be mopped up, a basic but effective tactic.

Beyond the result, the finish was marked by two giant crashes as the bunch sped at 60-70km/h (gif animations over on tumblr). Were the surreal scenes caused by an Andalusian dog? No, rider error seems to blame. One looked avoidable when a Sky rider, Kiriyenka it seems, turned and looked over his right shoulder and drifted far to the left while Ag2r’s Blel Kadri was doing a turn with his head down. Neither rider saw each other but plenty of others saw the ground up close in the resulting stack. Kiriyenka already features in a “how not to…” UCI training video screened to trainees at the World Cycling Centre, maybe he’ll feature twice now?

These accidents prompted giant time losses for some, injuries for others and one outside tip for the mountain stages, FDJ’s Alex Geniez, left the with an ankle injury. Louis Vervaeke, Frank Schleck were out too, Cofidis’s Kenneth Vanbilsen has a suspected broken wrist putting him out of the spring classics. Among the main GC contenders, Chris Froome, Alberto Contador, Stephen Cummings, Benats Inxausti and Romain Bardet didn’t lose time but all others lost plenty. Stage 1b
A surprise win for local rider Javier Moreno of Movistar ahead of Wilco Kelderman and Jérôme Coppel. Yes the motos looked close at times but Moreno is a local and must have been motivated to the max. Pre-race tip Bob Jungels was fifth with Alberto Contador the best of those who stayed upright in the morning, putting him in the red jersey. Too early perhaps for the team, especially as his lead is by a fraction of one second? 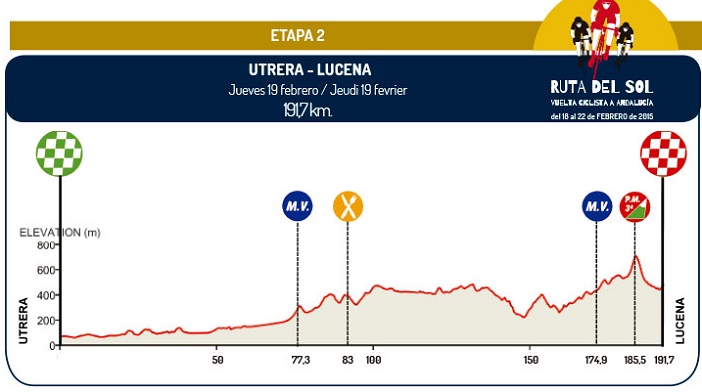 Stage 2 Preview
A hilly finish but maybe just enough for the sprinters to clear and crucially to make Movistar and Giant-Alpecin work to set up a sprint finish. But with so many riders losing mucho time yesterday the GC is over for so many riders and the big time gaps make for a more chaotic scenario. Why? Because normally everyone would be seconds apart for this stage but now the big gaps mean some times don’t care if others go up the road, while many teams have to send riders up the road in order to salvage something from the race.

The Finish: the race drags up to the finish in Lucena and then keeps going out towards the Primera Cruz, a climb which has 2km at 7%, enough to trouble some sprinters: if they’re not dropped they’ll lose places; if they don’t lose places they’ll have dulled their legs. It’s still a power climb, each section between each bend is a regular slope and so escaping will be hard, there is one hairpin-like bend at the top before a long regular descent to town where the bunch will meet an awkwardly wide roundabout before circling the town, some sharp corners, and

The Contenders
John Degenkolb is the prime pick again. The final hill is suitable for him and it could be enough to reduce some rivals too. Juan-José Lobato came off in the crash yesterday otherwise he’d be a 3-chainring pick. Bob Jungels is a pick, there’s no time bonus but he can finish fast while Edward Theuns again had another top-10. Ligthart could strike again, he took his chances yesterday in the recent Etoile de Bessèges he was also placed 6th on the finish up the “Wall of Laudun”.

Weather: it promises to be mild and with only a light breeze. Much of the terrain is olive monoculture and it doesn’t much of breeze for the crosswinds to become a threat here but the forecast says it’ll be calm.

TV: it’s live on Eurosport with the finish forecast for around 3.30pm. Tune by 3.00pm to watch them approach the climb.

For more viewing options, as ever cyclingfans.com and steephill.tv have links to live feeds.