The Ruta del Sol starts today with the added interest of Alberto Contador and Chris Froome. Between now and Sunday the race has it all with sprint stages, a time trial and two summit finishes. Plus it’s live on TV. Each day there will be a quick snap preview for the stage ahead. Today you get two because it’s a split stage with a sprint stage in the morning and a time trial later on. 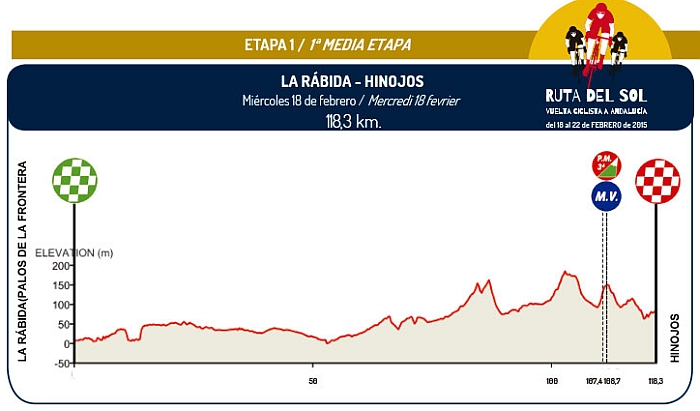 The profile looks spiky but check the y-axis and you’ll see the race oscillates between 50-150m above sea level, this is the variation you’d see in a day in Flanders. The 3rd category Alto de Chucena is barely a rise in the road but it is exposed to the wind. A light crosswind is forecast here so anyone hoping for the stage or GC has to be well-placed just in case. The finish comes into town and drags up, this time a little more than the profile suggests before arriving in Hinojos to cross the town’s cobbled streets to the finish line. These are urban pavé but bikes will bounce.

As for the riders, a sprint seems inevitable. With simultaneous races in Oman and Algarve the sprinters are spread around the world and scanning the start list you can see many teams have brought their stage race specialists. John Degenkolb is the prime pick, he’s in good form, has a strong team and he’s suited to the uphill finish. However Juan-José Lobato is a close second, the Movistar sprinter is establishing himself as a name to feared. In times past Spanish sprinters were like cheap wine, they went down well in Spain but rarely travelled well. But Lobato is vintage material, he’s won in the Barossa valley after all. More names to watch in the table below. Moreno Hofland and Edward Theuns get the next picks, Hofland should be a familiar name and needs to strike soon to get Lotto-Jumbo’s first win while Teuns is a Topsport Vlaanderen rider who’s already won the points jersey in the Etoile de Bessèges and was fifth in the Clasica de Almeria.

Bob Jungels is the top tip, he’s already won a time trial, winning the Etoile de Bessèges by a large margin over the rest of the field. Maybe the Trek rider got lucky with the wind on a very blustery day? Probably not but he’s a proven short course specialist, he was leading the Dauphiné prologue last summer until Froome and Contador showed up. As for these two, we’ll touch on them in the GC tips below, it seems this is too short and intense an effort, they’ll be satisfied with a top-10. Giant-Shimano’s Tobias Ludvigsson is another pick, he’s got the ability but a win would still be a surprise. New MTN-Qhubeka recruit Stephen Cummings should do well, perhaps the course isn’t hard enough for him? Sylvain Chavanel would have been an obvious pick but he’s getting on these days and such a sharp effort might be harder,maybe team mate Coppel is the quicker. It’ll be interesting to see what Tim Wellens can do, the Belgian is a sleeper to watch this week. The Overall Contenders and Pretenders
Before the names fighting for the red jersey, the geography. Later this week we get two summit finishes including the Alto de Hazallanas, the site where Chris Horner rode away from the other GC contenders in the 2013 Vuelta a Espana. This is 1,689m above sea level, a genuine summit finish.

There’s plenty of interest in the “duel” between Alberto Contador and Chris Froome in the hope they’ll pick up where they left off with the Vuelta. Both are playing down their chances, the talk is of bigger goals, they’re far from 100%. All true but we know that both like to race and attack. Contador’s talk of a gradual start to the season should conjure up images of his carnivorous smile and a ¡Pistolero! victory salute, as soon as the road goes uphill he’s bound to get fidgety. Similarly Sky rarely turn up to a stage race just to ride around. To reinforce their chances both come with strong teams and no obvious co-leader; Sky have Nicolas Roche but we don’t know much about his form.

Scanning the other names there’s a Dutch duo of Bauke Mollema and Wilco Kelderman, once team mates now rivals. Mollema looked very punchy in the Vuelta a Murcia. Kelderman looks like the real deal overall, when Froome and Contador were trading blows on the Col du Béal in last year’s Dauphiné he had a ringside seat despite having the Giro in his legs and is supported by climbers Steven Kruijswijk and Laurens Ten Dam.

Pierre Rolland is the enigma in the mix, a big talent and suited to these finishes but is he focussed on this race? He’s been active in races already so we expect a show on one stage if not more and those close to him say he’s more comfortable with leadership. Romain Sicard is improving too.

I’m keen to see what Tim Wellens can do, he’s had a top-10 this year already and has the makings of Belgian’s best stage racer while Lotto-Soudal team mate Jurgen Van den Broeck is a big engine but he’s still on one career win after a decade in the pro peloton. The whole team looks very useful uphill, perhaps no surefire winners but Jelle Vanendert, Bart de Clerq and Louis Vervaeke bring support.

Cofidis’s Daniel Navarro has been in the mix in this race before and will enjoy the two summit finishes. Caja Rural’s leader is David Arroyo who seems a long way from his glory days in the Giro when he wore the pink jersey for so long but he should be up there in the mountains. Without the injuried Nairo Quintana, Movistar’s best bet is Lobato for stage wins but otherwise watch Beñat Intxausti and José Herrada in the mountains.

IAM’s Swiss rider Sebastian Reichenbach is a talented climber. Jean-Christophe Péraud might be famous for his Tour de France podium but this is why he won’t win: he’s spent a lot of the winter doing interviews and making appearances. He’s hardly an A-lister but it has meant time away from training and more seriously he’s had two operations for a persistent saddle sore that’s meant more time off the bike, Romain Bardet is a safer selection. FDJ bring climbers Alexandre Geniez and Kenny Elissonde, each a stage winner in the 2013 Vuelta however totally contrasting styles with the beefy Geniez the better bet this week. Janez Brajkovič will be keen to make a point, a rare chance to ride in Europe after being dumped by Astana.

Realtime: there are no time bonuses

TV: it’s live on TV with Spanish television and Eurosport covering the action… except for today’s morning stage is expected to to finish around 12.45pm European time. The afternoon stage finishes at 5.50pm and this will be live on TV.

Otherwise check here each day because the stage finish timing varies alot, sometimes 3.00pm, maybe 3.45pm. For more viewing options, as ever cyclingfans.com and steephill.tv have links to live feeds.