The UCI have brought out a new system of points and rankings for 2015. The main ranking is the “UCI World Classification”, a rolling ranking of riders of all categories based on performances over the previous 52 weeks as opposed to each season or calendar year. Within this there are big changes to the allocation of points across races, for example all three grand tours are now treated equally.

All this is buried in a PDF listing modifications to the rulebook but below is a summary of the changes along with the new points scales.

Update Sunday 25 January: the UCI has scrapped the introduction of this scheme for 2015 following protests by teams upset at the sudden introduction. It should be back for 2016 but until then the old system applies: calendar year, more points for the Tour de France etc.

World Classification
The UCI World Classification will rank riders and nations. It will be calculated on a 52 week rolling basis with the rankings updated each Monday. The count at the end of each calendar year will be used to award an annual winner. It will include all male riders alike, from the World Tour down to U23 riders so points earned in all UCI races from World Tour to .2 status races will count to the UCI World rankings.

UCI WorldTeam rankings
There is also a ranking of UCI WorldTeams, the label given to the 17 top teams in the World Tour. This ranking is obtained by adding up the points scored by the team during each UCI WorldTour event. These points are equal to the points won by the three riders having scored the most points during the event (prologue, stages, GC, secondary classifications, wearing the race leader’s jersey cumulated).

National Rankings
Based on the Continental rankings explained above the best eight riders from each nation will have their points added together to score for their country and rank each nation.

Confused?
There are two main rankings to remember:

The regional, national and continental rankings are subsidiary to these main rankings.

Points Scale
Here’s the more interesting part. Out goes the old scale and there’s a new system of awarding points across all races. Here’s the full table, scan it and we’ll get to a summary the changes below the table…

The first point to note is the equality for grand tours. In 2014 and before the Tour de France offered a points premium compared to the Giro and Vuelta (200 points to 170). Now it’s equal, an arithmetic alteration that’s a step to making the calendar more balanced.

Next points for all other World Tour races are equal. In the past the Monuments (Milan-Sanremo, Tour of Flanders, Paris-Roubaix, Liège-Bastogne-Liège and Il Lombardia) attracted a premium but now all races are equal, an overall win in the Tour Down Under is worth the same as Paris-Roubaix; the Vattenfall Cyclassics is the same as the GC of the Dauphiné.

However if the overall win in a stage race like the Dauphiné brings the same points haul as victory in the Tour of Flanders, a stage race offers more points elsewhere. New for 2015 is the ability to earn points by wearing the leader’s jersey each day in a stage race plus new points for the final winner of secondary classifications like points or mountains jerseys but only in grand tours. Here’s the scale: 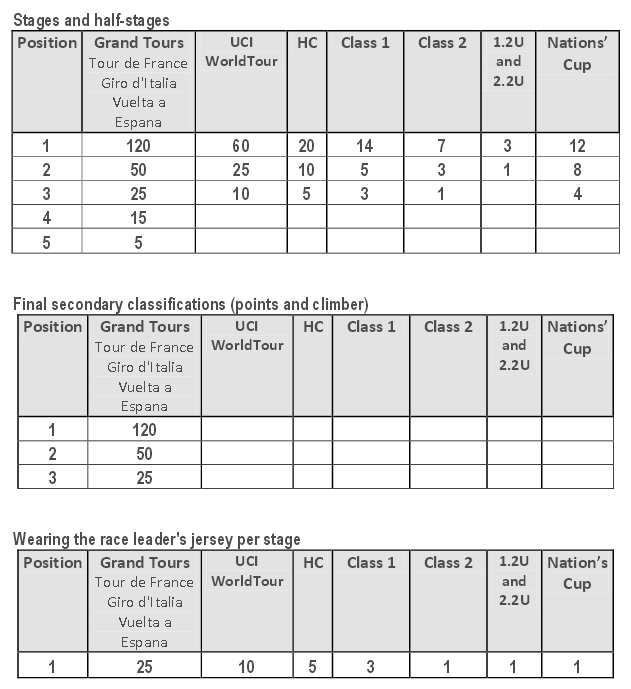 This daily points allocation for stage races makes sense, wearing the leader’s jersey in a stage race is a valuable and prestigious event and being rewarded with points makes sense. However it does tilt the rankings to stage racers, someone who grabs a leader’s jersey early in a grand tour will rack up extra points. But not that much, wear the maillot jaune or maglia rosa for 10 days and you collect 250 points, fewer points that you’d get for finishing fourth – off the podium – in, say, the GP Plouay. Put another way, a 10 day spell in yellow brings more publicity than points. Style vs Substance
Rankings aren’t the be all and end all of pro cycling but all the same if the UCI is making these big changes it’s curious to see them slip out inside a PDF that sits on a backpage of the UCI website listing rules and regulations. The rankings themselves matter more than the way they emerge but if the UCI wants people to value them it needs to work on the announcement and give them new system some prestige: a proper press release, some teaser pics of a towering trophy… instead of a furtive PDF.

Conclusion
Topping the league table or rankings matters in other sports but in cycling it’s performance in a race and the results that count: winning the Tour de France is the big prize, not landing 1000 points. But UCI points have been cycling’s undeclared currency in recent years as teams try to avoid relegation from the World Tour and this has affected tactics and performances in races too.

The changes for 2015 are substantial with a single UCI World ranking that will list all riders. Also there’s greater equality between the World Tour events with equal points for the three grand tours plus the addition of points for wearing or winning a jersey.

Update (Friday PM): if you found it surprising to find these major changes tucked away on a back page of the UCI website, it seems the pro teams agree. Via the AIGCP grouping the teams are making a protest to the UCI and it could be that the rules are delayed to 2016 or even scrapped says NOS.nl, with LottoNL-Jumbo team boss Richard Plugge saying “you can’t change the rules suddenly in January”.