A two week Tour de France? Non. Or to use the phrase beloved of many a French hotelier, c’est pas possible. Still it’s good to question established ideas and tenets. There’s no rule that says the Tour de France must be three weeks long and if there were, we should question that too.

It’s a current topic since UCI President Brian Cookson was in Madrid to award Spain and Movistar their UCI World Tour prizes. He spoke to the media when asked about a shorter Vuelta and Tour de France implied nothing was off the table. Let’s explore why an abbreviated Tour won’t suit anyone.

Lost In Translation
Brian Cookson doesn’t speak Spanish and his interviews in English the other day have been translated into Spanish and then back to English and other languages. When asked in Madrid if the Vuelta a España could be reduced from three weeks to two he replied, in essence, that discussions were ongoing. The follow-up question whether these discussions could apply to the Tour de France too and the response, written up in Spanish was “aquí no existe nada intocable” or “nothing is untouchable”. So reducing the Vuelta is possible but implicitly a shortened Tour de France can be discussed… but is unlikely to say the least.

Reduced Vuelta?
A shortened Vuelta is possible and discussions are ongoing. Is this sacrilege? Perhaps not, after all the original Vuelta was two weeks long and over the years the race’s distance has varied a lot. 1947 was 23 days long; 1987 was 23 days long (hat tip @irishpeloton) and some with just 14 stages long in the 1930s and 1960s. But the Tour?
I can’t see any practical reason to shorten the Tour. There are theoretical ones, the kind worthy of an essay – see below – but hard to conceive in pro cycling’s real and intensely commercial world.

ASO own the Tour and it’s not in the UCI’s remit to abbreviate privately-owned races. Group discussions continue but nobody would gain from a shorter Tour. ASO shrink the race by a third meaning their income should shrink by a third. A reminder that ASO earns income from the Tour via three sources:

That’s just ASO’s loss and it’s hard to see their gain. It can be argued some of the Tour’s stages are boring. Those flat routes that end inevitable sprints for example and even this blog’s race previews often recommend readers tune in late for the action. But it’s another thing to find it boring and simply scrub the stage. It’s like saying white bread doesn’t taste of much so instead of a ham and cheese baguette you might as well skip the bread and just eat the filling. Crucially the Tour is aware of this and tends to place the boring stages, plus the rest days, mid-week when audiences dwindle. The weekends are often host to crucial mountain stages to ensure bumper viewing figures and crowds. There will be other losers too. Teams would have less airtime, less publicity in a shorter race. Plus with, say, only 14 stages the chance to get the glory of a stage win is diminished meaning less success to go around. For example Garmin-Sharp’s Tour de France would have been very different without the third week stage win by Ramunas Navardauskas.

Touching on the stage start and finish sales there’s more geographical element that a reduced race can’t cover as much ground… or if it wants to visit a lot of France then it’s beaucoup transfers.

Finally there’s the fan aspect. I like a long race and sure not every day is great but this is not a sport for those with short attention spans; if you don’t like watching for hours and days then watch the evening highlights. There’s no point in cycling trying to ape more intense sports too much because a two week race is still a very long contest, but it’s the moments of drama along the way that add to the tension, the crosswind on a flat day, the surprise breakaway, the unexpected crash.

Who Gains?
We would have an extra week on the calendar. But what to do with it? Freeing up space in July is awkward because all the big names are hardly going to ride a shorter stage race just before, preferring instead to fine tune their training. Besides there’s already a big lull in racing before the Tour de France with Halle-Ingooigem and the Sibiu Cycling Tour, plus the national championships in the two week space before the Tour de France.

There could be health gains for the riders, three weeks does seem to be the upper limit for racing with the body collapsing into catabolism in the third week. But to those who say it’d have less doping, look at the 100m in athletics: less than 10 seconds, not one mountain pass and yet it’s endured as many scandals and podium rejigs as a grand tour.

In theory…
Reducing the Tour de France is a way to rebalance the sport. If the Tour de France is too dominant on the calendar, sucking up audiences, attention and money then then one way to boost other races is to scale back the Tour in the same way you’d cut back a large tree in order to let some light shine other plants below.

But the egalitarian argument would be better served by boosting other races rather than pruning the sport’s biggest success story. Or at least some equality could be achieved by more surreptitious means than chainsawing one third of the race away. For example the Tour might be the biggest race but the UCI could award equal ranking points to all grand tours, let riders target the Tour for the prestige and money but let those who do other races enjoy equal rewards. 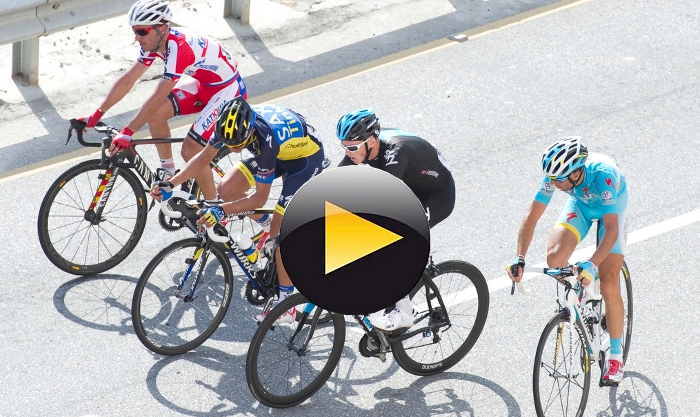 As not seen on TV: Rodriguez, Contador, Froome and Nibali in the Tour of Oman

2017
So far, so theoretical but since the topic’s appeared in the news I wanted to walk through the reasons why it won’t happen. What is more likely is we get a reduced Tour de Suisse and Critérium du Dauphiné, ditto Tirreno-Adriatico and Paris-Nice. As someone who enjoys these races – the Dauphiné was the best race of 2014 for me – this is a shame but these events are less profitable and scaling them back as a means to ensure a more equal participation is understandable…

…However while we might say we want to see the big names race against each other it’s worth noting audiences for these clashes are low, Tirreno-Adriatico loses money while the Tour of Oman can’t afford live TV, presumably because nobody will pay despite the prospect of a stellar field and breathtaking scenery.

Conclusion
Nothings is untouchable but there are no obvious commercial or sporting reasons to shrink the Tour de France and besides, the idea of shrinking the Tour de France has got lost in translation through interviews. The race is the sport’s best shop window and closing it early would be self-defeating, akin to sawing off the branch the sports sits on.

As a private business it’s for ASO to decide but there’s little commercial pressure and others, from teams to riders to fans, don’t have many reasons to support a shrunken race either. With the sport looking at reform there’s always the danger of change for change’s sake, that neophila trumps tradition but in this instance there’s no push for a shorter Tour. The question for any calendar reform is not whether the Tour will be shrunk but what can be done to boost other races.