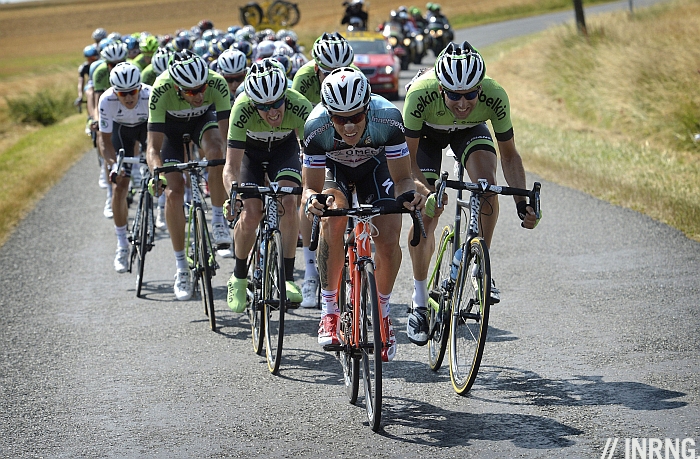 An obvious pick, Stage 13 of the Tour de France was the day the OPQS and Belkin teams shredded the bunch in the crosswinds. With hindsight it how a hotel booking can alter a race too.

We’ll get to hindsight in a minute but I’d picked the second week of the Tour as its most dull point and went as far as identifying Stage 13 as the most uninspiring stage of the race. It was flat and rolled past endless cereal fields. Even on the day the weather forecast didn’t offer much to get excited about. But strange things can happen in a hotel.

By chance OPQS and Belkin were given the same hotel for the night before the stage and they cooked up a plan to exploit the crosswinds on the day. History suggests Dutch and Belgian teams master crosswinds like no other but the extra element comes from the conspiracy. It’s rare to find a sport where teams can conspire in an attempt to fix the outcome of an event. It’s illegal in most sports. But cycling’s different, when two riders break away they collaborate in order to cheat both wind and rivals alike. The events on Stage 13 took things an extra step with a premeditated tactical conspiracy but that’s not new, it’s been done many times before.

A plan is one thing, execution another. On the day it wasn’t that windy but OPQS and Belkin just about made it work. Better still it happened from far out. At first it looked dubious but Marcel Kittel was caught out, in part thanks to a mechanical and so OPQS had an incentive to stick at it in order to help Mark Cavendish. There were other losers, for example Euskaltel-Euskadi’s Mikkel Nieve and Igor Anton plus Ag2r’s Romain Bardet. But the scenario changed when Valverde got problems with his rear wheel. This set off a series of errors that often compound to mark turn a hiccup into a disaster. The rear wheel change took time, Valverde then ordered help and the chase back was panicky, riders tasked with pacing were burned up like booster rockets yet unable to shuttle their leader back to the lead. Still, we need to be careful with the criticism, Valverde was seeing his GC hopes go up in smoke and it was make or break time.

In the end the day’s result is almost forgotten. Mark Cavendish won the stage, perhaps a clue that he can win a big classic one day but also testimony to the action.

Why the highlight?
Exciting racing in itself but the tactical genesis is an interesting prelude and the stage had aftershocks that lasted well through the race for example it propelled Bauke Mollema up the GC and arguably Rui Costa’s support of Valverde gave him the space to go hunting for two stage wins later in the race. Proof that even the Tour de France, the sport’s most choreographed competition, can surprise when you least expect it.