Seeing the day’s breakaway get reeled in and beaten resmebles a nature documentary where the predator inevitably catches and consumes its prey. Only this day in Tirreno-Adriatico was different as a carnivorous Contador joined with the breakaway riders to help escape those in his pursuit.

Last year RCS promised to listen to the concerns of riders who complained about insanely steep roads… and duly included “Italy’s steepest road” for 2014. It is 610m at 22% with a 30% in the middle of the slope and crucially a sharp final corner where it’s 29% on the inside and 20% on the outside.

Impressive but the race didn’t wait the last ramps. Contador took off on the penultimate climb of the Passo Lanciano, first with Nairo Quintana then alone. Too early? The day’s breakaway was still clear and Contador joined them. He was first class passenger riding in the second class wagon. Contador distanced the others but not without resistance from Simon Geschke who was only six seconds down. Ben King and Adam Hansen were both within a minute. Inevitably Contador unholstered his imaginary pistol, a warning shot to shot to all. 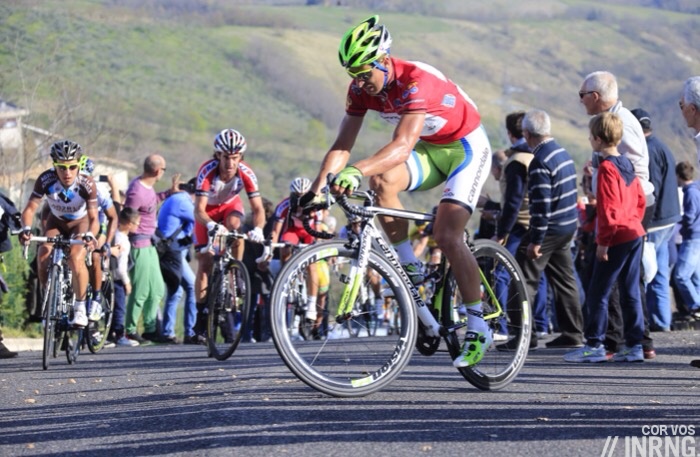 36×32. That was Contador’s gearing for the final climb. It was not for show and marketing, a chance for SRAM to say “the pros use” the kind of gearing usually reserved for tourists and hobbyists. Look closely at the image above and the 32 sprocket is in use. Others resorted to weaving over the road, constructing private hairpin bends to lessen the slope. Spectacular yes but it was the previous climb up the Passo Lanciano that won the race as Contador eliminated erstwhile race leader Michał Kwiatkowski, 38th at over six minutes.

“Without a doubt this win will remain one the best of my career and one that I’ll always remember. It flashed by in a second but it’ll be a special memory,” Contador said at the finish… …I knew it was risky to try and attack so far out, but I really wanted this victory and I like to do things like that.”
– Alberto Contador via cyclingews.com

Why the highlight?
“Contador wins uphill finish” isn’t news. But the art and manner of the win was special. It was risk-taking over calculation. With hindsight the breakaway up the road was the perfect staging point but who have thought Nairo Quintana couldn’t match the pace and that the others would roll in two minutes down. 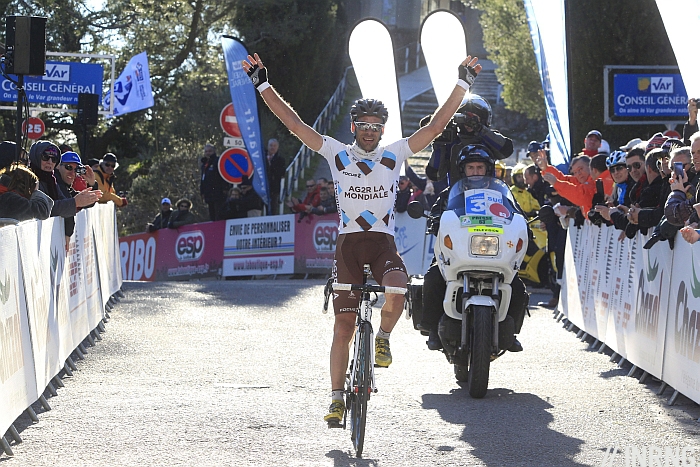 Hindsight
Fifth place went to Jean-Christophe Péraud but he was second of those who hadn’t gone in the day’s breakaway. He joined a chase group on the Passo Lanciano but crucially left them all behind on the final climb, with names like Nairo Quintana, Dani Moreno, Roman Kreuziger and Julián Arredondo trailing. Péraud had a strong spring, winning atop Mont Faron (pictured) and taking the Criterium International too before finishing third in the Tour of the Basque Country. Impressive but nobody would have predicted a podium place in the Tour de France.

A non-starter that day was Richie Porte. After a good start to the season it marked the moment where nothing would go right and he had a string of DNFs to his name and missed his main goal of the year, leading Team Sky in the Giro.