The Giro’s route for 2015 was announced earlier this week and one highlight is the Colle delle Finestre, the highest point of the 2015 Giro and unpaved too. What’s it like to ride?

The Route: there are two sides and this is the northern side from Susa, the Giro route which allows you to climb the unpaved section and descend on tarmac. It is 18.6km at an average of 9.1%. After Susa, follow the signs for Meana and the Colle delle Finestre.

The Feel: it’s famous as “the unpaved climb” but you start on a wide road, the tarmac blacktop neatly framed between two white lines like every other road in Italy. The profile above looks linear but the early section to the village of Meana is steep as it passes through a short tunnel. Maybe it’s the way you can see the slope from the garden walls with their sloping ramparts? Or maybe it’s the blocks of wood wedged underneath the wheels of a parked car that make you think it’s steeper? Whatever it is you might think the hard bit is the gravel but the early section is the steepest.

After three slow kilometres you leave the village for forests and the long road you’re going to stay on for some time. Get into a good gear and get rhythm. It’s very regular and you can thank the military for this. Rather than an old path used by shepherds or smugglers that gradually became an accepted crossing point, this climb was built by the army and to military specification with a regular slope so horses could drag cannons up. Steep but even.

Did you grease your headset? Maybe it’s worth thinking about this humble component because you’ll swish your way up, there’s a section with more hairpins than Beyoncé’s dressing room: 30 in 3km if you want to count. One benefit is you always have something to aim for and you can chose your line: out of the saddle on the inside if you’re in a hurry or ease around the outside to spin the legs. There’s a Lilliputian aspect as the narrow roads and regular hairpin bends make the road feel almost too small.

The unpaved section starts suddenly, there’s no gradually crumbling road that slowly gives way to gravel, instead a picnic table and a wooden sign mark the start of lo sterrato. For the road cyclist it’s only briefly disorientating. Presumably you’ve picked a good day to ride up – otherwise you’ll freeze on the descent and miss the views too – so the road is dry and as you’re going uphill few skills are required beyond looking out for obvious fist-sized rocks in the road. The unpaved section is gravelly but not rocky. You wouldn’t drive a Ferrari up but on a Sunday you’ll see many families a Fiat tackle it.

The further you go on the rougher the road gets but try not to look down at what’s passing under your front wheel as the views open up above the tree line and the sights get better and better.

The Verdict: a tough climb thanks to the distance and consistent gradient rather than the gravel. It’s easy to fear the unpaved part but it’s the entirety of the climb, the full 20km that takes its toll. One of the hardest climbs in the Alps. There are paved climbs with rougher roads that match the distance and gradient, for example the irregular 2,481m Colle Fauniera lies to the south with its cracked and crumbling road surface. Save something in reserve to enjoy the views at the top, preferably looking at the peaks on the horizon rather than the awkward Danilo Di Luca commemoration stone perched at the top of the pass.

Bike Tech: the Giro has gone up but they have following cars. Ordinary riders can use this road without reservation, just preparation. If you’re a weightweenie trying to save every gram this isn’t the place to try the lightest wheels and the finest rubber. Otherwise watch your line and you’ll be fine. Pay more attention to the weather as it would grim on a wet day. Think about letting air out of the tires for more grip on the gravel but a tiny pschitt and no more.

When? In 2011 the Geox team captained by Dennis Menchov went for a recce ahead of the Giro only to get stranded in the snow. As the sign says the road is open from June to October. Pick a dry day with blue skies for a great experience. If you can choose any time of year September offers landscapes that glow in the late season sun.

Loop: the descent is paved so continue to loop clockwise to Sestriere, Cesana Torinese and Oulx to rejoin the Val di Susa for a manageable 100km circuit. 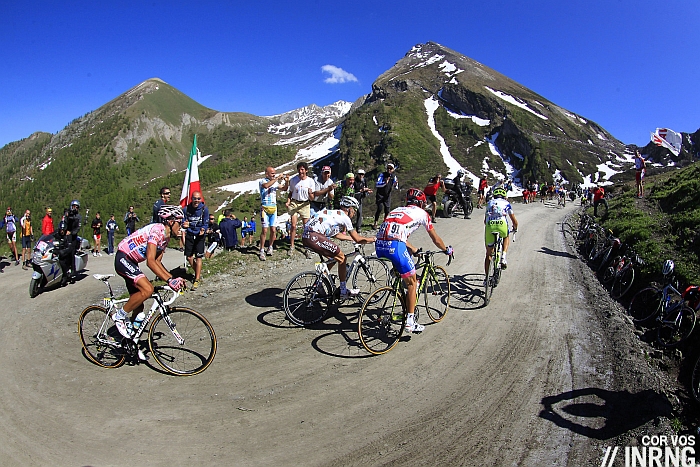 History: there are two elements to this. One is the history of these valleys and the pass itself, and there’s cycling and the Giro:

Say It: Finestre is Italian for “windows”.

Travel and Access: the nearest big city is Turin, 50km to the east. An industrial city it has its charms and history too. Milan is the main point for international access with, Lyon, Nice and Geneva all nearby adding more connections by rail and rental car.

The climb starts in Susa which is easily accessible by autostrada and there’s a railway line too. Susa makes a good base given the other climbs in proximity like the Moncenisio, aka Mont Cenis. There’s a compromise as the more you base yourself near Turin, the more options you have within driving range as other valleys become accessible but the fewer mountain passes there are within range if you’re cycling. So Susa if you’re there for a couple of days but for longer you might want to move around are base yourself in Turin.