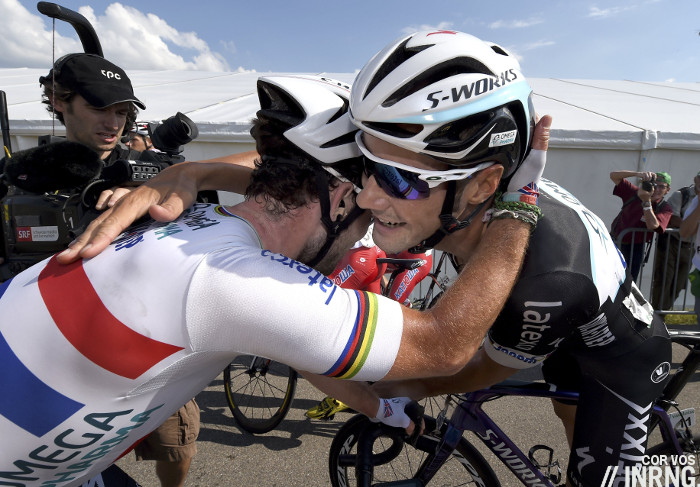 The season’s over for 2014. It’s been a great one for OPQS with 62 wins, half as much again as the nearest team. Mark Cavendish has been their best rider with 11 wins and it could have been more were it not for that crash at the finish of the Tour de France’s opening stage. But OPQS’s win rate is helped by 18 of their 30 riders winning.

But what about the Tour of Hainan and the Tour of Taihu Lake? Well in the world of the UCI these races are part of the 2015 season given rule 2.1.002 says the Asia Tour runs from 1 October to 30 September so technically they don’t count for 2014. The timing rule has changed and I don’t know what the old rule was, but if you want to add the Tour of Hainan from the end of 2013 as part of the 2014 year, add 10 to Belkin’s score.

The chart is self-explanatory and by the end of the year even the modest teams were racking up wins. Giant-Shimano’s score was helped by 13 wins for Marcel Kittel, 10 for John Degenkolb and 6 for Luka Mezgec with a total of 11 riders winning. The cohabitation between Kittel and Degenkolb is interesting, both seem capable of winning at the highest level and there’s no bickering about their status on the team, a credit to them and management. Podium finishers Orica-Greenedge owe most wins to Simon Gerrans with six and the rest shared 11 other riders.

FDJ might delight in beating Team Sky to the count but their win rate could be a problem next year. Arnaud Démare won 15 races but not once in a World Tour race (although he’s won at World Tour level in 2013). Nacer Bouhanni is off to Cofidis and 11 wins could leave a hole in the team. Only Arthur Vichot and Jussi Veikkanen won races for the team, for Thibaut Pinot’s great success this year his solo la vittoria e bella tattoo must mean he’ll be wanting to show off a victory salute in 2015. Neo-pro Lorenzo Manzin should add to the win count next year too.

Ag2r have been one of the best teams of the season but look, “only” 17 wins. Carlos Betancur could have got more but has struggled with his weight, one of the amusing moments of the year was his “power sprint” to beat John Degenkolb in the Tour du Haut-Var early in the year, his momentum carrying him to the line. Team manager Vincent Lavenu can be satisfied with his season but without an obvious sprinter the count next year will be hard.

Astana have been in the headlines for all the wrong reasons of late and they’ll hope all we remember is Vincenzo Nibali’s Tour de France win. Le Tour dominates everything and one win here makes a season, it certainly makes up for a relatively quiet season beyond Nibali and Fabio Aru’s results.

Europcar though remain the only team in the World Tour not to win at World Tour level but they came close with second places during the year for Thomas Voeckler, Yohann Gène, Kévin Reza and Davide Malacarne.

The chart above shows the second tier pro conti table. Rusvelo are top and this might surprise since even loyal readers of this site will surely struggle to remember a win. It’s because the team focus on Russian races and almost all have come from 2.2 status events in Russia, only the Tour de Azerbaidjan and Timofey Kritskiy’s stage win the Tour of Qinghai Lake stand out. A tale of quantity over quality.

IAM Cycling are next and if cycling had promotion and relegation like other sports they’d surely be promoted. They’ve got a strong team of riders capable of performing in World Tour races and have signed more riders for 2015 to help them. They look set to stay Pro Conti and benefit from countless invites but could move up.

The same for MTN-Qhubeka who rode their first grand tour this year. Fewer wins but they’ve recruited big and will count on invitations. It’ll be interesting to see if ASO give them an early call with wildcards for Paris-Nice but the Tour de France invites tend to go out early too.

The reverse could be true of Team Bora-Argon 18 for 2015. NetApp-Endura have had a great season thanks to Leopold König but the Czech climber’s going to Sky without him invitations to the biggest races could be harder. Team Colombia sit on three wins and it’s the same story, they have a low budget and as soon as a rider looks good they’re poached by another team with the latest mover being Jarlinson Pantano who joins IAM Cycling. This development vocation is laudable but surely we’d all like to see the team win with its riders more often?

Next is the rider victory rankings. It’s always sprinter-heavy and André Greipel tops this time but it’s not his best year with only one Tour de France stage win. He remains a very dependable sprinter though and is already an outsider for Milan-Sanremo. Démare too didn’t win big but he certainly won often, he seems easy to chop off a lead out train at times but we’ll see him win more in 2015. Alejandro Valverde was becoming famous for finishing second this year but took 11 wins. L’Equipe has similar article today with various rankings and charts and the first shows the total win count and then World Tour wins.