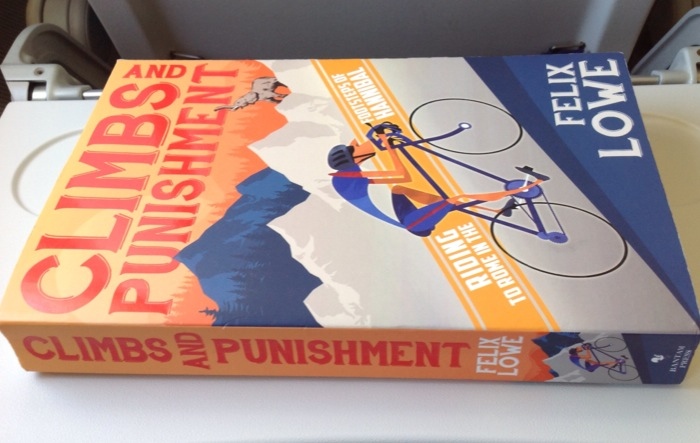 Last year reporter, blogger and Twitter pundit Felix Lowe rode from Barcelona to Rome as part of a cycling tour designed to copy Hannibal’s attempted march to Rome and he’s now telling the tale in print.

I wasn’t sure about reviewing this because it sounded more like a write-up of Lowe’s holiday, the literary equivalent of a two hour slideshow of someone else’s holiday photos. “Here’s me in the Pyrenees, here’s me on Mont Ventoux” and so on. But it’s good be proven wrong.

There is recounting of the ride, notably a double-ascension of Alpe d’Huez via the Col de Sarenne, replicating the 2013 Tour de France stage. Only it’s got gems, for example amid the hairpins of Alpe D’Huez is an exploration the origins of “Dutch corner” on the climb via a Dutch priest.

Barcelona to Rome isn’t a novel route and Lowe’s group take their time. This only makes things better for the book. While his senior travel companions toddle along a sometimes frustrated Lowe heads for an extra mountain pass or too. Don’t expect SRM data and performance analysis, his eyes are open for curiosities.

Lowe’s riding ensures a prodigious appetite and the meals consumed en route are chronicled. This could have you salivating but Lowe quickly chronicles the digestive consequences. He is merciless at times with his subjects which range from French milk to the Pope. His room-mate Terry comes in for all sorts of mockery, whether his snoring or erectile dysfunction (you’ll have to read to see how Lowe learns this) or just his riding style:

“His head down and hunching over the handlebars, my elderly room-mate was a man possessed, meandering all over the road in such a giddy state that there was no recognition in his eyes as they met mine while shouting encouragement… …it was as if he had been struck down by dementia during the ascent with his brain retaining but one atavistic faculty – that of a mad, frenzied, corybantic foot-drumming on the pedals, his only path to salvation.”

Terry is either a good sport or he’s visiting every bookshop in Australia to buy up copies of the book and pulp them. I think it’s the former as he regales travel companions with sarcastic comments on marriage. Lowe reserves his biggest criticism for himself and the book and to use a phrase he might use, starts with self-deprecation and ends up within self-defecation. There’s a touch of Tim Moore here and the humour is the glue that binds it all together, helping to turn the pages. But the humour might not be for everyone, at times it’s climbs and pun-ishment. If you enjoy his Twitter wisecracks, here’s a 350 page assembly; if not then try before you buy. Here he is describing a 19th century attempt to recreate Hannibal’s crossing of the Alps albeit with just one elephant:

“The pampered pachyderm also had a bespoke wooly coat to keep here warm. Her daily diet consisted of Chris Froome’s optimum bodyweight (68kg) in hay, as well as an André Greipel thigh’s worth of apples (23kg)… …Despite a hefty food intake loyal to the ‘quantity not quality’ adage, Jumbo lost around 140kg (roughly the weight of Jan Ullrich in the off-season”

There’s more to the book than the ride and witty wordage. Locations along the way are used to as junctions to veer off into new subjects. The Hannibal theme is repeated but it’s intermittent, instead of lectures on Roman history there are anecdotes on elephant warfare or tribal ambushes. As a Eurosport blogger he’s also thinking about racie history along the way, whether immediate topics such as Chris Horner’s Vuelta win or older themes from the past whether Fausto Coppi or a particular climb.

Conclusion
Several books in one. Primarily a bicycling travelogue, it also explores history from Hannibal in the Alps to Chris Horner in the Pyrenees. It’s amusing and readable. You won’t learn many cycling tips but you will laugh and maybe wince as Lowe laughs his way around the Mediterranean, skewering colleagues but all with enthusiasm.