Money makes the wheels go round in pro cycling and the governing body has just quietly published its annual report on UCI.ch. Here’s a look at the financial report for the calendar year ending 2013 and the summary take is a steady year.

Normally this document came out in late September but now it’s two months earlier, an improvement and a campaign pledge by Brian Cookson is met although he did reference large corporates who typically produce their annual report even faster. Reading the report you see projects to build BMX tracks in Aigle… which have been completed so the document is always a bit dated. 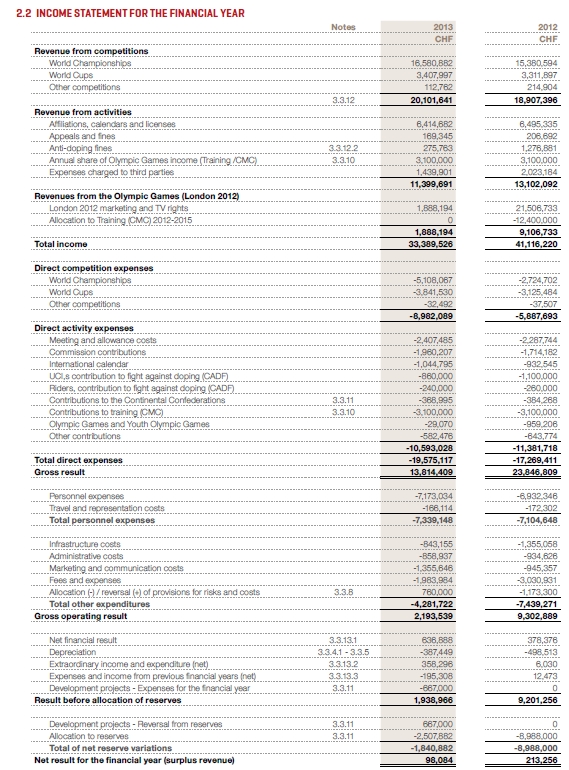 Overall these are steady results and the Olympic jackpot is being spread over four years on various development projects all while the UCI kicks a further CHF 2.5 million into its reserves as it builds up a cash pile to see it through any leaner times. Bad times could include future problems at the Olympics or maybe even losing a big bio passport case at the CAS; also see the difficulty in finding venues for the various world championships.

Non profit association
A reminder that the UCI is an “association” under Swiss law which better translates as a charity. This means it has a non-profit status and with it comes tax perks for the governing body and its staff.

World Cycling Center
The WCC is the UCI’s development operation and new for 2013 was the construction of a BMX track next to the UCI’s HQ. While there are accounts the real numbers are that 288 coaches and 146 athletes received 9,186 days of training. It’s got satellite centres around the world. Not all of this is a cost, indeed new rules requiring agents to register and team managers to attend courses are sometimes bemoaned as money-making schemes for the UCI.

UCI World Tour
As the accounts say, the UCI WorldTour is not an independent legal entity, but an activity of UCI that is partly managed by an ad hoc committee, the Professional Cycling Council (PCC), that is under the responsibility of UCI’s Management Committee

Cycling Anti Doping Foundation
This is the anti-doping unit that is increasingly being moved out of the UCI, witness the move last September when Pat McQuaid stood down as a director to make way for independent experts. But there’s a long way to go before anti-doping becomes truly independent from the UCI, on a small level its offices are down the corridor from President Cookson’s office, more fundamentally it is funded by the teams, race organisers, riders and the UCI itself meaning it’s dependent on, rather than independent from, the UCI.

The major funders are always the teams with 71% (Professional and Professional Continental Teams), followed by the UCI (13%), organisers (12%) and riders (4%). In 2013 they provided CADF with CHF 6,656,000 which enabled the CADF to take more than 14,000 samples (blood and urine, in and out of competition). The biological passport programme remains the most important activity managed by the Foundation.

Global Cycling Promotions
This is the UCI’s race promotion arm although confusingly it doesn’t promote the UCI’s World Championships. Instead it’s the entity behind the Tour of Beijing. Having sucked money out of the UCI and others in recent years GCP is starting to stand on its own feet. The accounts report a CHF 77,000 annual profit but this only after billing the UCI 85,000 in consultancy fees.

Incumbency Power
One reason why it took years to challenge Pat McQuaid was the difficulty in an outsider running for the office of President. The UCI’s own annual spells this out with the incumbent having certain advantages:

“In the months leading up to the Congress (in September), part of the [Communication] Service’s activities were dedicated to Pat McQuaid’s presidential re-election campaign”
– page 66

Financial Relay
2013 saw Brian Cookson elected as President but most of the year was part of Pat McQuaid’s time. The Congress to elect Cookson and the battle before it brought “additional legal and communications costs that the UCI had to absorb before the Florence Conference“. The accounts have been presented by Alain Siegrist, a survivor from the McQuaid era given a lot of other senior types in the UCI have gone.

Missing Money
Remember these are the accounts for 2013 so the millions being spent on the Cycling Independent Reform Commission don’t show. The CIRC will report its findings in 2015 so expect deductions to appear next year and the year after that.

Conclusion
2013 will be remembered as a year of change for the UCI’s management but in the background the finances were stable, a boost from the Olympics allowed more money to be socked away in the reserve fund. We might think of cycling as the Tour de France and spring classics but for the UCI the Olympics and the road cycling world championships are the big events, at least in terms of income.

If 2013 was a steady year for the money it’ll be interesting to see where things go in the coming years. We know millions are being spent on the CIRC. With bold reforms to the calendar and more on the 2020 agenda the sport is set to see big changes and these will alter the costs and revenues. The same as the UCI tries to kickstart women’s racing, it’ll presumably require investment. As such the finances of the past are not a big deal, the leadership is important to the future. But everything is easier with a CHF 20 million reserve fund.