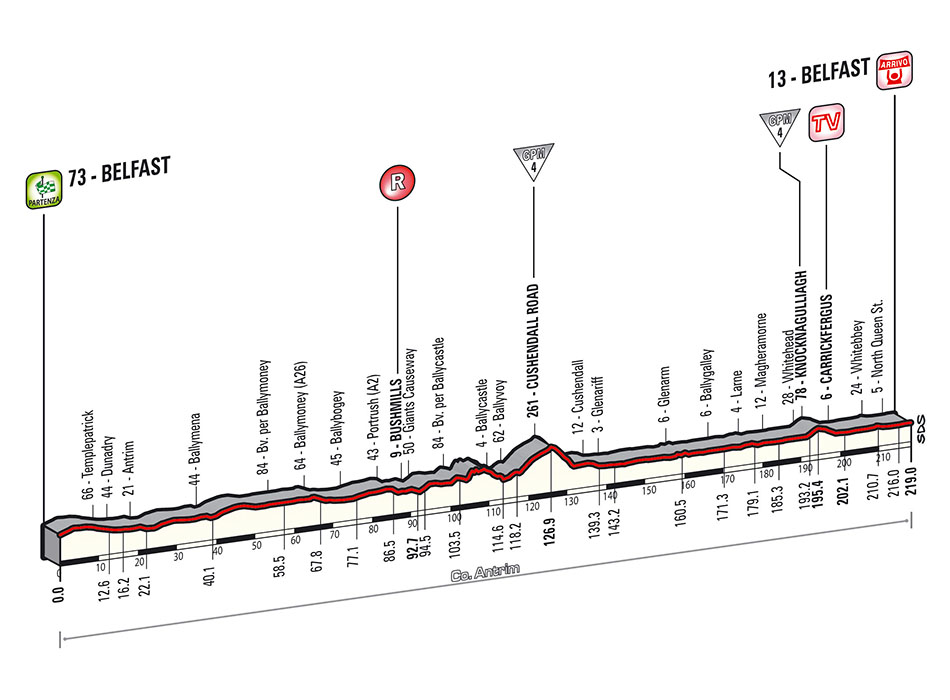 Belfast to Belfast. Today’s route looks like something you’d find in a brochure, a circuit for tourists with a rental car. The cyclists mind find it less enjoyable with heavy downpours forecast before a sprint finish. It was brave to start the race where the Titanic set sail. Given the ship was sunk by icy peril before reaching its destination you wonder what the next three weeks will offer. The first stage have an iceberg, instead an iron manhole cover was enough to sink four Garmin-Sharp riders crashing with Dan Martin breaking a collarbone, his Giro ended. You wonder if he’d have preferred to fall down the hole and vanish and the crash put the trial in team time trial.

Less dramatic but Joaquim Rodriguez is in dangerous waters and was already telling the media he’s in trouble after losing a lot of time due to a slow team. The stage was dry for early starters, wet for the middle and began to dry out later. It did affect the times but that’s the luck of the draw.

But enough gloom and doom. There are reasons to celebrate with Australians and Canadians first to cheer with a stage win and maglia rosa but everyone should be pleased at the giant crowds. A word on Svein Tuft? No, there’s simply too much to write given all the stories and contradictions. Lanterne Rouge in the Tour de France he now leads the Giro. He rides for Orica-Greenedge but started his pro career with Garmin. Read more at the New York Times. 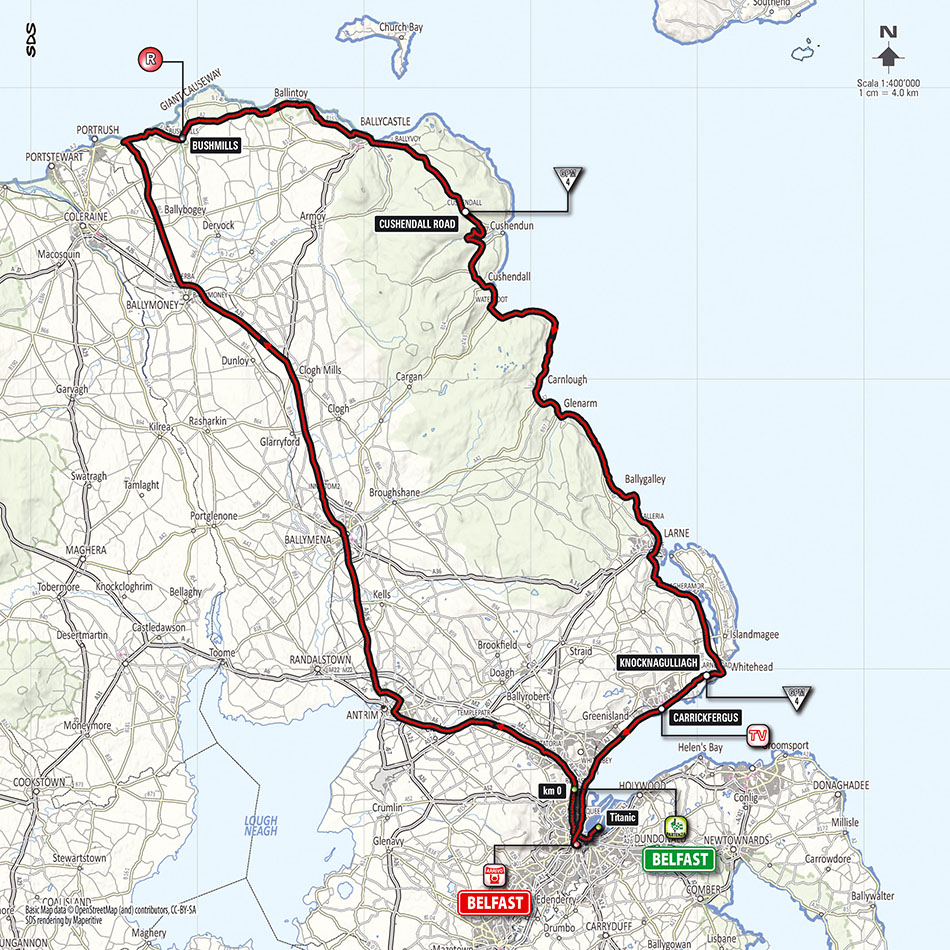 The Route: The 219km course resembles a tourist itinerary as it heads past whiskey distilleries, natural landscapes before taking the coastal road back to Belfast to finish in the city centre.

The climb midway is a long drag and harder for its exposed nature than its gradient. Indeed the greater obstacle is the open terrain which leaves the bunch to deal with the wind.

The Finish: the race thunders south into Belfast with few obstacles or tricks apart from some traffic islands. It’s only with 340 metres to go that there’s a sharp left-hand bend but it’s wide.

The Scenario: a bunch sprint seems inevitable. But first the two climbs out on the route are an incentive for a breakaway to go, the first three over win 3, 2 and 1 points respectively for the mountains competition and so there’s an appoint with the podium.

The course is very exposed but the weather (see below) looks calm and if this holds true there aren’t conditions to split the bunch. Instead the danger comes from the crashes. The race has been given some order thanks to yesterday’s stage but many sprint outsiders will fancy a go in the finish and even if the course is regular, the riding won’t be. The fight into that last wet corner matters, teams will want to drop off their rider in the top-5 if not higher to go to the line. The Contenders: if yesterday’s stage win by Orica-Greenedge felt certain, today Kittel is the pick but not the certainty. Ideally his long sprint allows him to be swept into the final bend by a team mate after which he can open his charge to the line. But everyone knows this and the fight for position will be fierce. Watch Nacer Bouhanni and Elia Viviani as the alternatives but there’s a long list of others.

Weather: cool and wet, temperatures of 13°C and cooler under the rain showers, some of which will downpours. There’s a 10-15km/h headwind on the return leg.

Temperatures are obviously cold compared to normal “Giro” conditions but despite pedalling to the North Atlantic today this isn’t the furthest north the Giro has been. The race reaches 55°N today but went to 56°N when it started in Denmark in 2012.

TV: the race will be on a variety of TV channels according to where you are in the world. Eurosport is covering the race across most of Europe. beIN SPORT has the rights in the US and France. I haven’t seen the promised Gazzetta free stream but leave a comment below if you have to share with others. There’s cyclingfans.com and steephill.tv for TV schedules and pirate feeds and more.

Note the finish is expected for 4.10pm local time / 5.10pm Euro time and that the Giro website has the time wrong. Tune in early for the scenery but the action should be condensed into the last 30 minutes. 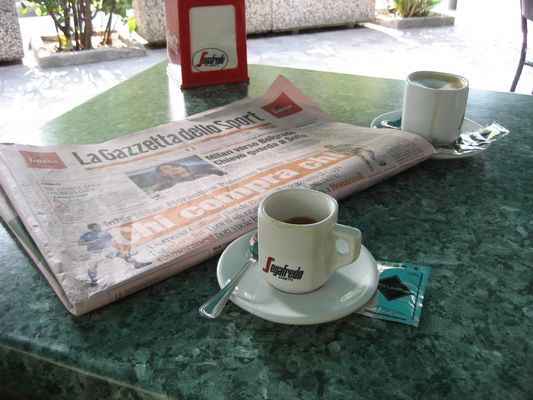 Pink jersey? It could have been green. The Gazzetta Dello Sport was born in 1896 from the merger of La Tripletta and Il Ciclista. It was printed on green paper but in 1899 the paper switched to pink paper. The Giro d’Italia was first run in 1909 but it wasn’t until 1931 that a pink jersey was awarded, copying the practice of the yellow jersey in the Tour which reflected the yellow pages of L’Auto, the French newspaper behind the race. Luckily for Belfast the Gazzetta didn’t opt for orange print.

Today La Gazzetta is like its French sister, it rose to prominence thanks to its cycling past and is still linked to running the national tour as part of RCS Media, just as L’Equipe is part of the Groupe Amaury which also owns ASO who run the Tour. Sometimes reading L’Equipe can make your wrists ache as you turn the countless pages of football to find the cycling but it’s only training for La Gazzetta which seems to fit in 20-25 pages of football a day. If you want cycling, start with the back page and turn the pages in reverse. But once you find the pages there’s rich information on the Giro from a team of writers covering the Giro.