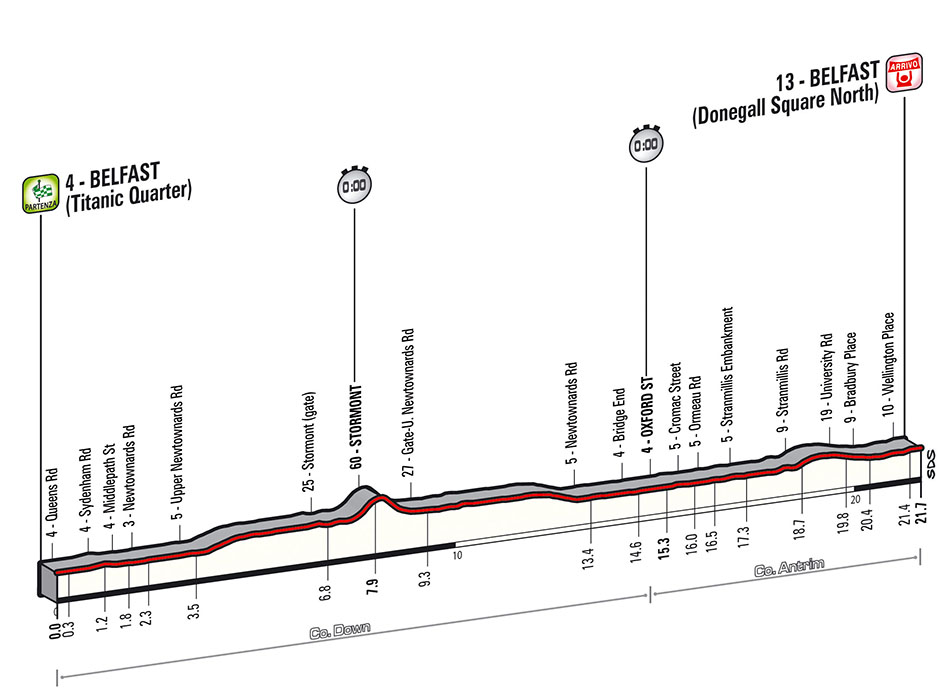 A team time trial to immediately create a chronological hierarchy. It’s probably not going to be good TV but it will resonate for weeks to come.

This course is fast and flat with teams expected to exceed 50km/h. It’s one for the powerful squads with heavyset riders and we should see Cadel Evans and Nairo Quintana pull out a lead on their rivals… but the obvious pick for today is Orica-Greenedge.

The Route: flat and with few corners this is a course for the powerhouse riders who cruise above 50km/h. To elaborate more the course has some tight turns but once on the Newtownards Roads it’s a long open section to the grand Stormont estate. Here there’s a small hill but we’re talking a gear change, and a few pedal strokes out of the saddle but it’s mainly done in the aero tuck…and basta, time for the reciprocal descent. As you can see from the profile above it takes 7.9km to go from four metres above sea level to 60 metres. Back into the city centre and the corners are wide. Overall this is a course with few visible traps. The Contenders: Orica-Greenedge are the prime pick. They have no pretensions for the overall by the end of the race and if Michael Matthews is a sprint possibility, today offers a higher degree of certainty. The backbone of the team comes from the Australian team pursuit squad with today’s birthday boy Svein Tuft a bonus. The squad was second in the Giro last year and won the Tour de France stage. Sure the rosters vary but this is a team that is very well-drilled.

Invariably there’s a “but” and in their wisdom RCS have decided to send the team off in second place. This could kill off the TV suspense as team after team falls short but at the time of writing the weather won’t suit them (see “weather” below). After green and gold, it’s red and black. BMC Racing are the second pick. There a strong team and I’ve even wondered if they’ve picked too many big units because time gained today is great for Cadel Evans but he could lack support in the mountains. They won the team time trial in the Giro del Trentino, relegating a Wiggins-powered Team Sky. Evans is the engine of this team but the rest of the squad all bring something.

Team Sky won last year but the Giro was a priority that saw several of their strongest riders in action. Now the story’s different. They do still have some strong riders. I can’t see them winning but at pixel time they’re 33-1 to win with some bookmakers, that’s too long. A top-3 would be a big ask but just possible.

But there are four teams each with valid credentials for a top-3 too. Belkin have a homogeneous team with some solid and under-rated riders. A win would be a big surprise but they could make the top-three. Astana have a very strong team for the whole race but they’re more orientated to the mountains. Garmin-Sharp used to make this event their speciality and they have some good riders. Movistar also also in with a chance with the twin-engines of Jonathan Castroviejo and Adriano Malori and they rode a creditable fourth place in Trentino, although with some different names.

Now for some others. Omega Pharma-Quick Step are the world champions in this discipline but not one of the winners in Firenze last autumn is present today, in fact the team look light so I think they’ll be content with a top-5 place. Cannondale were fifth in Trentino so can’t be ignored but I don’t see them challenging for the win. If the course was much shorter Giant-Shimano could treat this as a sprint only it is probably too long for them to shine. But they can’t hang around, they need to ensure Kittel’s set up to take the pink jersey via time bonuses in the days to come.

Katusha get a mention because of Joaquim Rodriguez as a GC contender but they’ve got more mountain goats than racehorses; they were second in the 2012 Giro TTT but they had more Russian TT power.

Finally watch for all the others. Today sees a few teams going for the win but a majority secretly just want to limit their losses. The likes of Androni Giocattoli, Europcar, Ag2r La Mondiale, Colombia will be content to get round in one piece and avoid giving away more than a minute to Cadel Evans and Nairo Quintana.

Weather: cool and cloudy with a top temperature of 15°C. There will be a breeze from the west reaching 25km/h but fading in the evening. Scouring the windsurfing and air traffic data so you don’t have to, this change looks marginal but the early starters have a minor disadvantage.

Rules + Start times: nine riders set off together and the the time is taken in the firth rider to cross the line. The start times below are local BST so add +1 hour for CET Euro time:

TV: there will be live TV for the whole event. Frankly you might be all excited by the race but there’s not much to see in a team time trial, just nine men in aero formation, the result matters more than the way it was obtained.

The race will be on a variety of TV channels according to where you are in the world. Eurosport is covering the race across most of Europe. beIN SPORT has the rights in the US and France.

I understand it’s free to air on Gazzetta TV but we’ll wait to confirm. There’s cyclingfans.com and steephill.tv for TV schedules and pirate feeds and more.

History: Northern Ireland hasn’t produced many champion pro cyclists. Instead today’s race is a a chance to show off Belfast’s history and heritage, from the docks where the Titanic was built to the Stormont parliamentary buildings where a peace process has turned violence into more humdrum municipal matters. The past is still very present and today’s course twice passes a grim mural of a masked terrorist clutching a machine gun (pictured). Recently the local press has been dominated by the arrest of a prominent politician. The Giro provides a welcome distraction that seems to have engaged both sides of the divide and of course everyone else.