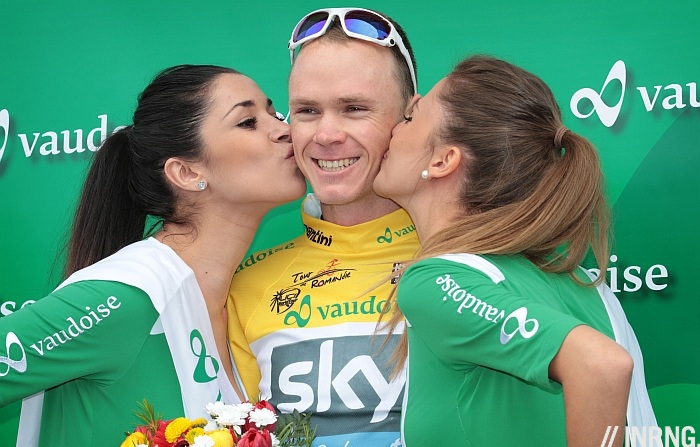 With the spring classics done it’s time for the stage races. But there’s no immediate switch from embrocation to Ambre Solaire as this year’s Tour de Romandie offers similar conditions to last year with snow and rain forecast

With Cadel Evans in 2011, Bradley Wiggins in 2012 and Chris Froome in 2013 the race winner has gone on to win the Tour de France. This year’s edition is probably important to Team Sky in terms of recovering from a disastrous April rather than staking claims to the future. It’s also a race that serves a final tune-up for those riding the Giro.

The race opens with a 5.6km prologue. Confusingly the opening stage isn’t in Romandie but Ticino, the Italian part of Switzerland. Given the tendency to displace the start of a stage race to a foreign country this is a modest move. There’s no point showing the course profile because it’s flat. Instead of altimetry the corners provide the challenge. It’s a course for a prologue specialist, perhaps with a track background.

Update: the climb over the Simplon Pass has been cancelled. The race has laid on trains to take the riders to Brigerband for an abbreviated stage. That little bump at the end? It’s a proper Alpine effort and the start of road to the ski station of Crans Montana. It’s got regular slopes in excess of 6% so expect many sprinters to be dropped before the race swoops into Sion for a flat finish.

The profile looks alarming but this stage is slated for the sprinters. We’re likely to see the bunch split on the hills before the finish but the climbs are longer and steadier.

The Queen Stage of the race but this is minor royalty as the race heads for the hills behind Aigle and the UCI’s headquarters. The penultimate climb is 10km at over 7% and the final climb is 11km at 6.3% but with a long section at 9% before the race drops into Aigle. It’s enough to allow an attack from the big riders but the descent and flat valley approach could allow a climber to be reeled in.

Politics: If it’s hard for the riders, spare a thought for race organiser Richard Chassot who was ejected from the presidency of Swiss Cycling over Pat McQuaid’s nomination saga, returning to Aigle might be awkward. Will Brian Cookson appear?

A circuit of six laps. The major difficulty is repetition, it’s lumpy and the tactics will depend on who has what to defend in the race and maybe the weather. It’s hard to see the GC being overturned as riders will think of their time trial the following day.

A final 18km time trial with a serious climb in the middle that’s got 8% gradients to help give others a chance against Tony Martin.

Route Summary: mountainous but it’s still April so the race doesn’t venture too high. All riders including the sprinters need their climbing legs. Without a summit finish the winner will use the time trials to their advantage with the prologue and the hilly Stage 5.

There are time bonuses for each of the road stages of 10, 6 and 4 seconds.

Team Sky and Chris Froome need the win. They won last year and in the past this race has been a dress rehearsal in taking the race lead and the burdens and routines that go with it. It also allowed the likes of Wiggins and Froome to prove to team mates and the public alike that they could win a hilly stage race. Now all this is established and expectations are different. But Sky are having a rough season that’s fallen far short of their abilities and budget. This could be the moment to put things back on track. Froome’s told L’Equipe he’s off the antibiotics and his back is no longer a problem, adding “my numbers are as good as this time last year, if not better”. We’ll see how Richie Porte fares too, he’s thrived in this race before too, perhaps Sky give him the leadership, we’ll know more after the prologue.

Tejay van Garderen is the next pick. As the Volta Catalunya showed he can climb and time trial with the best and this is another step along the way for him. The BMC Racing team are registered in the US but BMC’s big on Swiss heritage. The only question is form, he’s was sixth on the Tour of the Basque Country. Is he up for this or is it just a race to complete before the Tour of California and then the Tour de France? I’d say yes as the chance to race Froome is rare… but we’ll discover this week.

After these three riders comes a long list of pretenders. First is Astana with Vincenzo Nibali. He looked a little short on the road to Liège but the demands of steady climbing and time trialling are different so we’ll see how his form fares. His Astana team is very strong, with Janez Brajkovič, Jacob Fuglsang, Tanel Kangert, Fred Kessiakoff and Lieuwe Westra all capable of winning the race if the stars align while Max Iglinskiy could poach a stage. Pity Andriy Grivko who’s on bottle duty.

OPQS come with a triple pronged attack. Rigoberto Urán is on the up for the Giro so we’ll see how he climbs. Michał Kwiatkowski could win stages and the race outright but he’s due for a rest soon while Tony Martin will find the Queen Stage too much.

Ag2r have Jean-Christophe Péraud the engineer could have designed this course with its climbing and time trialling. He finally won his first stage race in the Critérium Internationale a month ago, a podium is within reach. The team could win stages from a breakaway with Domont and Cherel while former MTB rider Aléxis Vuillermoz is still learning the ropes of road cycling.

Talking of MTB riding, Orica come with Nino Schurter, the MTB world champion. He’s a novelty and a wildcard but the instense efforts of climbing in this race could be perfect, he’d struggle on longer climbs but it’ll be good to watch. If not the Aussie team has Cameron Meyer who’s the GC hope and needs to break through. 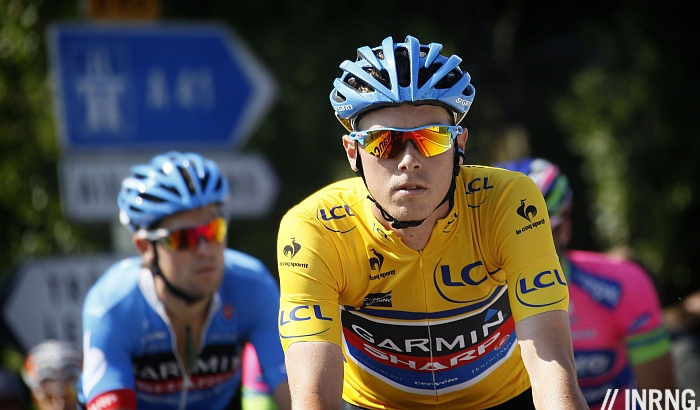 Two riders who’ve used this race to make a name are FDJ’s Thibaut Pinot and Garmin-Sharp’s Andrew Talansky. Pinot’s already regretting the lack of summit finishes but all the more reason to attack. He was an impressive 10th in the Pais Vasco time trial. Talansky was top-10 on Catalonia and it’ll be good to see how he’s time trialling, this time last year he was narrowly beaten by Froome in the opening time trial. Both come with good teams and in the US team there’s Rohan Dennis who’s a podium dark horse if he’s climbing well.

Now a quick skip of Giro preppers: Tinkoff-Saxo bring Nicolas Roche and Rafał Majka. Cannondale have Ivan Basso who’s surely over the (Blueberry) hill when it comes to winning outright, he’s not been in the top-10 once this year unless it’s been a team time trial. Trek’s Riccardo Zoidl is another new signing who climbs well but the Tour of Austria winner hasn’t raced since March.

Finally some more names.Simon Špilak is infamous for riding well in bad weather and is a past winner of this race while team mate Yuri Trofimov is a good strealth pick. Laurens Ten Dam‘s getting better with age at climbing. IAM’s Mathias Frank is in great form and could poach a stage, he lost the Tour de Suisse last year to Rui Costa who might find stage racing suits more, he’s been third in this race for two years running now. 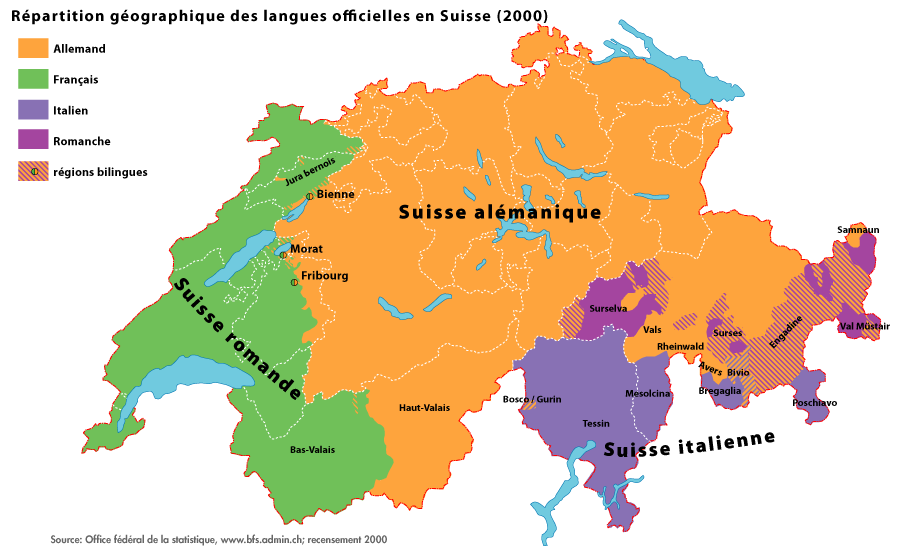 It’s the French-speaking part of Switzerland, to the west of the country and borders France and Italy, in green above. The race can borrow from a range of terrain, from wide plains and valleys to mountain passes and ski resorts. It’s the home race of BMC, the Swiss bike company and the IAM Cycling team too.

TV: it’ll be on TV but the channel varies, Sky in Britain, beINsport for the USA. Pirate internet feeds prevail as always and cyclingfans.com and steephill.tv are the go-to sites. Note the stage finishes are expected around 5.00-5.20pm local time.

Weather: snow is forecast above 1,600m tomorrow. If the prologue is dry, the rest of the week promises cool temperatures and rain.

History: first run in 1947 Stephen Roche holds the record for three wins. The race has dipped in fortune in the past but seems to be riding higher again with routes carefully crafted to allow the stage race stars of the sport to shine.

Website: finally I’ll salute the race website at www.tourderomandie.ch. It’s got everything you need to know about the race with maps, profiles, videos, race rules and more. It’s the model for so many other World Tour races which claim to be world class sports events but offer online relics.