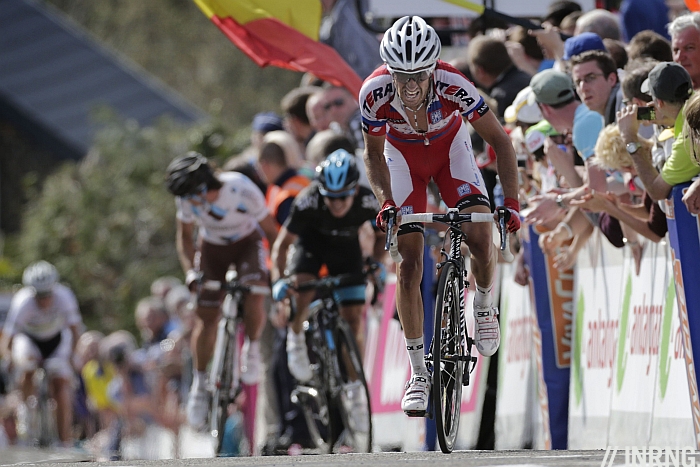 199km but this is a race dominated by the final climb of the Mur de Huy. Even if it’s actually climbed three times it’s still the third time that usually determines the winner. But it takes plenty to get to the final climb and more to arrive at the foot of the “wall” in the perfect place. This mid-week classic is always a drama and a great pointer for Sunday’s Liège-Bastogne-Liège showdown.

Is it worth explaining the 199km route for a race that is defined by its final climb? It changes every year but it’s the equivalent of laying a new road up an active volcano: it doesn’t matter where it goes, it’s all about the explosive finish at the end. ASO’s crack team of vulcanologists have been studying the local geography and this time the answer is a compact final loop with the Mur de Huy at 175km, the Côte d’Ereffe at 188.5km and then the finish at 199km. The plan is to help a breakaway, with fewer flat roads in the finale to suit a chasing peloton.

The Finish
The real name of the road Mur de Huy is the Chemin des Chapelles and the hill is called Mont Mosan. But mur, “wall”, sounds better than chemin, a mere path. But it’s legitimate, it’s so steep there’s a cable car to take locals up to the top.

1300m long with an average gradient of 9.3% does not sound too bad. But beware the average as this climb starts off slow when riders pass under the flamme rouge. Take the inside line on one of the corners and the slope reaches 26% and if you have the luxury of choosing your line then it is still 19%…but longer. Few get to pick their line as the road is narrow. 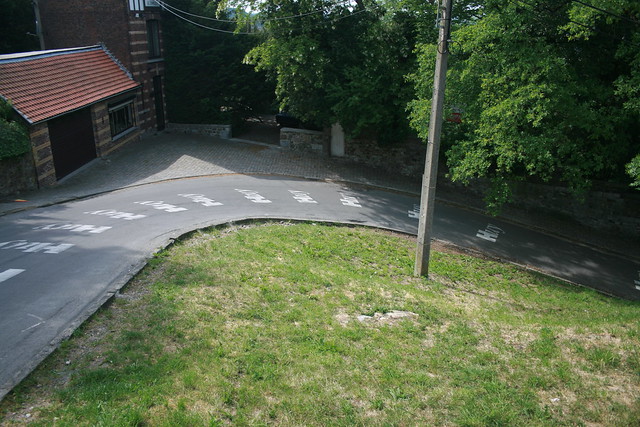 Riders will use gears like 39×27 or even 29 for the climb. Once you reach the last 300m the gradient eases up and some have been known to deploy the big ring. When it comes to the finish the effort is supreme and requires maximal effort but also supreme restraint. Ideally you want to be the first to surge clear but to leave the effort as late as possible. Contradictory? Yes, everyone will be at their absolute max going to the finish line and even the slightest acceleration requires a big increase in force. Launch too early and you will blow. But if you cannot follow the leaders as soon as the steep part starts then you’re out of it.

This makes the final two minutes extremely complicated as riders try to balance lactate and soaring oxygen debt with tactical finesse whilst surveying their rivals. If you watch on TV I don’t think there’s another race where the riders all have such a pained look on their faces. Contenders
Philippe Gilbert is the prime pick but far from a certainty. This race has the most predictable of finishes but I’m not totally convinced by Gilbert. He was outstanding on the Cauberg but this climb is something very different. He’s still the top choice but faces a good test.

Alejandro Valverde is a safe pick for the podium. He has all the tools with experience, good climbing and a punchy finish plus he was fourth in Amstel.

Katusha pair Joaquim Rodriguez and Dani Moreno are next. Rodriguez crashed out of the Amstel and is less and less explosive these days but he’s still the prototype rider for a finish like this. Moreno won here last year and there wasn’t much to go on results-wise before he struck, this year his ninth place in the Amstel is telling.

Tom-Jelte Slagter is a good pick but he’s young. The final climb might be reductive but it requires patience not to surge too soon, Garmin-Sharp team mate Dan Martin should be a big pick but he’s suffering from allergy problems. Talking of illness and injury, Jelle Vandendert took second place in the Amstel and he’s been a good climber in the past but this year has a serious knee injury. Carlos Betancur was third last year but is said to be recovering from illness. He finished the Amstel Gold Race which is more than he managed last year.

Bauke Mollema is Belkin’s kopman and may be a safer pick for Liège as the Mur might be too short for him but he could be there. Same for OPQS who have Pole Michał Kwiatkowski and Poels, Wout for the finish. Both are in fine shape and outsiders. Simon Gerrans is in good form but I think this climb could be too steep. Lampre-Merida have Rui Costa and Diego Ullissi, maybe podium outsiders.

Two more outsiders, Pierre Rolland and Warren Barguil, both French but different styles with Rolland as the big gear masher and Barguil as the flyweight puncheur. Finally there’s Vincenozo Nibali,arguably the biggest name in the race but his form is unknown.

The Scenario
The second time up the Mur de Huy with 23.5km to go could allow an attack but the perpetual problem is that a rider who can jump up the climb will have to go deep into the red and they’ll flounder on the open roads even if this year’s edition features a tighter circuit designed to thwart a chase. Even if a breakaway goes clear it’ll need 20 seconds at the foot of the Mur to resist the sprint. The last rider to have won from a breakaway was Igor Astarloa in 2003.

Weather: cool with the temperature not exceeding 15°C. A few light showers are possible. Rain matters given the hilly course in the Ardennes, the kind of roads where one small shower can leave the roads damp for hours.

TV: live from 2.00pm with the finish around 3.50pm Euro time. It’s an ASO race meaning the same channels as you watch the Tour de France own the rights… but they may well opt not to show this midweek race. Eurosport show the race and if not cyclingfans.com and steephill.tv have pirate feeds and alternative schedules galore.

Women’s Race: Marianne Vos is back in action today. You’ll find a good preview at Velofocus … but it’s not on TV. Lucky spectators in Huy get the action as they see the race go up the wall twice in addition to the men’s three ascensions.

History: first run in 1936, the record for wins is held by Marcel Kint with three wins. Known as “De Zwarte Arend” and “L’Aigle Noir” which translate as black eagle and back in the day many a rider had an aquiline moniker. But Kint wasn’t a climber, he was a one-day specialist with wins in Gent-Wevelgem and Paris-Roubaix. It was only in 1983 that the race started to use the Mur de Huy finish. Eddy Merckx, Moreno Argentin and Davide Rebellin have all won the race three times too… but Kint took his wins consecutively so he gets the special mention.