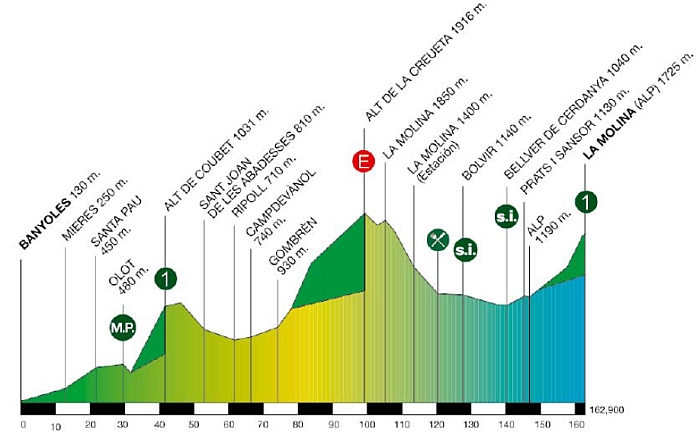 The race enters the Pyrenees for the first mountain stage but the final climb is not fierce. Instead this is a day when the descent could pick the winner because foul weather is forecast and the riders face a long and chilly ride down the top of the Coll de la Creueta in freezing temperatures. A battle between the big guns isn’t certain but they might feel compelled to turn up the heat… if the stage goes ahead.

Stage 2 Wrap: Luka Mezgec took a second consecutive win, a double feat mirroring the back-to-back wins by Michael Albasini in 2011 and Gianni Meersman in 2012. The stage saw an attack by Thomas Voeckler but the big wide roads on the approach to Girona were fatal to his chances even if there were few sprint trains willing to lead. As they came to the finish Leigh Howard hard a great lead out but faded and once again Mezgec emerged from outside of the TV camera’s view, only this time it was his choice as he darted across the road and took a long flyer to the line.

Mezgec is clearly the fastest in the race but what if he was the best dressed man too? Many suffered from the cold and it’s understandable but all the same, in this age of marginal gains it’s striking to see how many riders are ruined by rain. It’s not easy given riding in damp clothing at 40km/h in cold conditions means a huge windchill but it’s surprising just how many riders lose out because clothing can’t supply anything appropriate.

The show goes on. There was talk of alternations because of the weather and snow closing roads but the latest is the race is going ahead as planned. The Alt de la Creueta is 21km long at a gentle 4.5% but this includes a downhill sector and it peaks at 9% in gradient but crucially at 1916m above sea level meaning it’s one thing to go up but the race will descend in cold and wet conditions and cruelly pass the finish on the way down, lined with humming team buses with warm interiors and hot showers. The race then loops a section of the Cerdanya plateau before returning to the mountains for the ski-station finish in La Molina – site of Spain’s first ski lift – it’s 5.3km at 6% in the roadbook but a touch less in reality, with a maximum of 8% at two kilometres to go.

The Scenario: yes the race goes to the Pyrenees but today’s stage is an appetiser, a tapas taster of the Pyrenees. A new yellow jersey is likely if not certain. The Alt de la Creueta is tough but comes far from the finish and the climb to La Molina is not normally where the likes of Nairo Quintana, Joaquim Rodriguez or Chris Froome soar to victory. It’s a harder climb and tactical, where sitting on the wheels pays dividends. But given the weather many riders might not want to sit still in the bunch including the top guns. 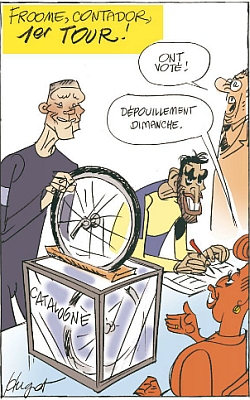 The first round as seen by L’Equipe

The Contenders: normally I would have said tomorrow’s stage sees the big names in action and they keep an eye on affairs today but the weather might force things. If so Alberto Contador and Chris Froome should be the ones to watch but refer to the main list of contenders listed before Stage 1 for the relative state of play. Contador’s in form from Tirreno and Froome doesn’t mind the cold, remember the Tour de Romandie last year when he took second place behind Simon Špilak* on the shortened Queen Stage.

Among the outsiders are Sky’s Mikel Nieve, if only for his name which means snow in Spanish. The long descent suits Caja Rural’s Luis Leon Sanchez, his modus operandi is to attack from a afar on a descent in a group, build a lead and then pick off the rivals to win solo. Why not Warren Barguil or Jakob Fuglsang for a change? Or José Serpa, strong in Paris-Nice. Talking of Paris-Nice, a short uphill finish suits Carlos Betancur and he’s still got some lardy insulation to cope with the cold and he might get the last laugh.

Weather: cold and wet. One forecast says the zero isotherm sits at 1,400m meaning the hardest parts of the stage will be held in sub-zero temperatures. Another forecast says the finish at La Molina will be enjoy temperatures between -4ºC and 5ºC today. Either way a section of the race will be in glacial conditions. Worse, it’s going to be damp although the latest is that the chance of rain and snow is fading.

While snow flurries are forecast they’re not expected to close the road, after all La Molina is a ski station that relies on getting tourist in when the snow falls. Bus or car is one thing and a bike race is another. Even if the roads are passable it will be a grim day, the idea of doing 80km/h downhill in damp clothing with -6ºC is extreme. 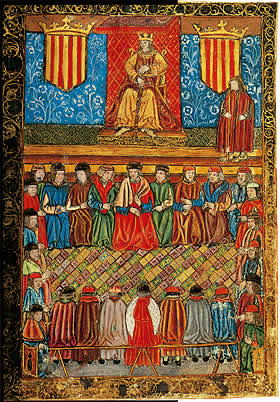 Daily Diaz: Catalonia as a state appeared in the Middle Ages, when the counts of Barcelona ruled the country (as well as the neighbour kingdoms of Aragon and Valencia, united in the so-called Crown of Aragon). In the XVth century a marriage originated the Hispanic monarchy, and in 1714 Catalonia lost its self-government, which was restablished in 1932 (for a short time) and finally in 1979.