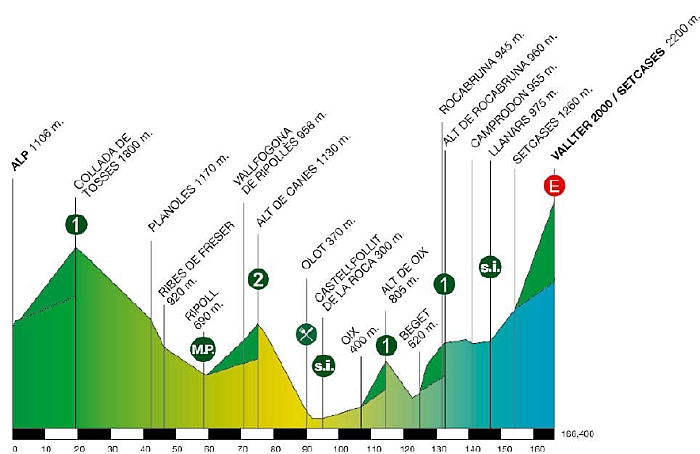 After yesterday’s introduction to the mountains today’s stage is the big one with a long, steep climb leading to a high altitude summit finish. It’s not certain to settle the race but will hand-pick the contenders. Stage 3 Wrap: the cold had riders worried before the start given the cold descent ahead. An early break went with Europcar’s Kévin Reza the last to be caught with 5km to go. This was where the final climb kicked up but a large bunch, except for a brief effort by Jacob Fuglsang and a shorter one by Pierre Rolland – stayed grouped until the final kilometre when Chris Froome was the first to attack with 800 metres to go, hunched a blurred flurry of limbs.

Froome’s move was interesting because it wasn’t cautious, if anything it was reckless with Sky DS Nico Portal later calling it “wild Froome”. If “racing is licking your opponents plate clean before starting on your meal” Froome was a waiter, serving up a wheel to follow for others although only a few could digest his change in pace. A royal quartet formed of Froome, Contador, Quintana and Rodriguez as Froome kicked again but without distancing the others. Then Rodriguez jumped and Contador tried to follow but could not match the effort leaving the Catalan to pull out a substantial advantage and take the race lead. Meanwhile Tejay van Garderen was doing his own thing, no yo-yo for him as he paced himself to fourth place.

The first high altitude finish of 2014, this 166km stage features a series of climbs but the first two, Tosses and Canes, average just 3%. But Oix and Rocabruna are significantly harder, averaging around 5% but with peaks of 10% and 14% respectively. Neither are fiendish but help to set up the finish.

The climb to Vallter-2000 is 12km at 7.8% with sections at 12% and finishes at 2,200m. It was used last year when Nairo Quintana won. The road is wide and consistent but gradient varies on the way with a tough section to the Collet de Xarriera with 4km to go with double-digit gradients.

The Scenario: a breakaway should form but we’ll likely see it chased down by teams, especially Katusha. A chase doesn’t equate to a catch especially if some good riders – as opposed to the desperate – go early but today should be all about the big names.

The Contenders: Joaquim Rodriguez is the prime pick. He was riding like the Rodriguez of old yesterday with a searing late kick to leave the likes of Contador, Quintana and Froome floundering. His training on Mount Teide in Tenerife means today’s altitude shouldn’t pose a problem. Froome lost out yesterday but that was in part because he was sprinting early, he could find the steadier finish more suitable but he’s yet to train at altitude. Contador couldn’t quite follow yesterday either but a top-3 seems reasonable while Quintana was left saying he’s not quite over a recent virus.

There’s no time bonus at the finis today which matters because if Rodriguez arrives with someone else, he might be tempted to gift the stage, obviously or via a contrived “sprint”.

Weather: cool and cloudy with a max of 12ºC in the valleys and colder at altitude where a rain shower can’t be excluded.

Daily Diaz on Catalan politics: What is Catalonia: a Spanish autonomous region, or a European stateless nation? It depends on who you ask. Last September 11th (national day) there was a massive demonstration calling for independence (or maybe just the right to decide whether or not be independent), and a consultation has been planned next November. Perhaps we’ll know the answer to that question by then.